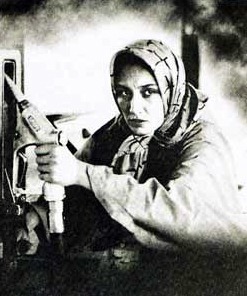 Spiritual Side of Iran

Share
The Museum of Fine Arts, Boston showcases a series of films portraying the spiritual side of Iran in their annual Festival of Films from Iran.

As a wave of anti-Muslim sentiment spreads across the country in the wake of the September 11 terrorist attacks, the Museum of Fine Arts’ upcoming Festival of Films from Iran would seem to be disastrously ill-timed. While Iran has never been associated with the attacks and has publicly condemned them, the American public is increasingly jittery about all things Middle Eastern.

But in truth, this is exactly why these films should be seen. The festival could not be more timely. It is ignorance about the Muslim religion and about the Middle East in general that leads to the public’s perception of Muslims as terrorists, and a viewing of these deeply religious films sheds some much-needed light onto what to most Americans appears as a shadowy and mysterious religion. Each of the films has a clear moral based on love and peace and family and spirituality, and each film’s protagonist learns lessons about caring for others.

Unfortunately, this is also many of the films’ artistic downfall. While the films are valuable for giving a glimpse into the Muslim religion and showing that its foundations are love and peace rather than hate and war, as works of art they are often naively simplistic. "Legend of Sigh," for example, often has the feel of a bible-school educational film. It is a dramatization of a proverb about a man named Sigh, who appears when someone heaves a heavy sigh of sadness. To ease their suffering, he allows them to change places with someone they think has a happier life.

Predictably, the new life generally offers the same amount of suffering and hardship, though in a different form, leading to the obvious lesson that everyone has hardship, and one should appreciate what one has been given in life. The film begins with a rich, childless widow who is so miserably alone in her mansion that she is near suicide. Suddenly Sigh appears and offers to give her someone else’s life. She chooses to switch places with her servant, who is married and has children and who appears to be happy despite her poverty.

Once she’s in the servant’s shoes, however, she sees that all is not well. Her husband is a surly gambler and a drunk, her son is straying into the streets for a life of crime, and she doesn’t have enough money to pay for her daughter’s operation. She again heaves a heavy sigh and is again offered a chance to switch lives with another woman. And so it goes, with the woman experiencing the lives of a women across all social strata — rich and poor, country and city, student and teacher. And no woman is any happier than the next.

In this, the film is more interesting as a feminist examination of the lives of Iranian women than as a spiritual lesson film. The woman does learn all the right spiritual lessons, but the film also takes some small and measured steps toward questioning the plight of women in Iranian society. The woman learns that happiness does not come solely from family, from living in the country, from living the liberated life of a student or the artistic life of a brilliant writer. Women’s lives are examined and illuminated, but the film is not necessarily interested in challenging the status quo. It allows its female characters to occasionally voice some muted acknowledgements of their oppression — for example, the female student notes that men don’t like women who study and "act like imperfect men" — but it does not seriously challenge these ideals.

"The Blue-Veiled," meanwhile, is a sweet and tender love story between a rich, lonely old widower and a poor village girl who needs financial and emotional support for herself and her family. The two secretly marry, but the stress of keeping their union a secret wears on the old man, and when his disapproving family discovers the truth, he is forced to decide between the love of his children and the love of his wife. With excellent performances from the regal, gentlemanly Ezatolla Entezami and celebrated Iranian actress Fatemeh Motamed-Aria, "The Blue-Veiled" is not only an enthralling love story, but also a rebuke against a rigid class system that prevents people from coming together to fulfill their mutual needs. In the end the film teaches that love should transcend social borders and that people should judge each other on their individual merits rather than their social standing — again an admirable, if simplistic, moral.

And, like "Legend of Sigh," each of the characters in "The Blue-Veiled" has genuinely good intentions. Even the disapproving family members who insult the poor village girl are shown to be misguided rather than malicious, acting out of an overprotectiveness for their father rather than mere cruelty.

Much darker than "Sigh" or "The Blue-Veiled," the film "Hemlock" tells the story of a man who seemingly has the ideal life — a beautiful wife, a good marriage, happy children, a good job. But he meets an intriguing woman in the city and begins having an affair. The dark storyline resembles that of "Fatal Attraction," and the man ultimately decides he has made a mistake but the mistress desperately tries to hold on to the affair. While the characters in the other films are basically benign, if confused and troubled, "Hemlock" addresses flaws in an individual’s character and explores the darker side of human nature.

But again, the exploration is rather simplistic — the man who has everything and lives a proper life is tempted by the wicked city woman who, naturally, smokes American cigarettes, listens to American music, and sells drugs. Overall the film is an entertaining and suspenseful drama that, like "Sigh" and "The Blue-Veiled," is firmly rooted in the beliefs and practices of Muslim religion. The wicked woman is wicked because she has abandoned her spiritual life and sought refuge in men, money, and drugs; the man is made unhappy because he gave in to temptation and did the same.

Each of these films broadcasts its intentions from the start, with the dedication "In the Name of God," yet many of the values portrayed in the films will not seem to differ much from Western religions.