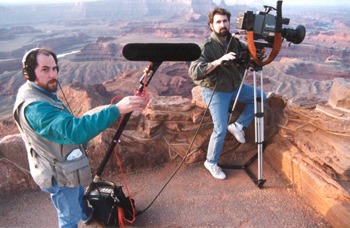 How to Be a Production Engineer

Share
Producing for notables from MTV to the NBA, Donlin Teleproduction Engineering has the know-how to teach future PEs the tools of the trade. Read and learn.

If veteran production engineer, David Donlin, were to place an ad for the ideal PE, it would probably read something like: "Searching for Type-A knowledge-hound to coordinate amicably with producers and DPs. Must be proficient with state-of-the-art film/video equipment on location and in the studio. Position requires lighting experience, a passion for problem-solving, the ability to work under pressure, and the chutzpah to take creative chances." Aside from paying a lot for that ad’s word count, Donlin would argue every letter is necessary to be a worthy production engineer.

Although a PE’s job includes a great deal of communicating and organizing, the first step as a PE is making sure your director of photography makes the greatest images he can possibly make with the equipment you present to him. Additionally, taking that captured information to post-production is in the realm of the production engineer.

Donlin suggests three types of PEs in existence: "Generally speaking, the first type is usually a sound person with a fair understanding of cameras, perhaps shooting news/corporate images. The 2nd level adds to that a great deal of knowledge and hand-holding for the DP who works mostly shooting film, understanding light values and color balances and corrections. The 3rd level can handle multi-camera shoots, time switchers, inputs/outputs, performing relatively middle-level maintenance in the field; they’re able to get in and figure out why stuff isn’t working."

So how does he do that, and how can you? Donlin’s stints at NBC and ABC put him in the pre-cable TV line of fire when he says the best of the best were at the networks. Later experience at studios like Century III gave him not only the hands-on experience but also the attitude and the seeds of knowledge he needed to become a go-to guy locally and nationally. Donlin advises any wannabe production engineer to be a sponge, ask questions, and avoid the FUD factor.

This translates to interning, getting entry-level positions, doing production assistant work, and getting yourself close to other engineers who can teach you real-world experience.

"The more knowledge you can soak up, the bigger jobs you’re able to do," Donlin states. "The bigger your capabilities are, the more money you can make. Knowledge is your career. You need to love production, love diddling with things, do a ton of reading to see what’s going on out there." That includes trade publications like Millimeter (www.millimeter.com), Broadcast Engineering (www.broadcastengineering.com), and Videography (www.videography.com). Also, Web sites like www.industryclick.com contain multiple links to film/TV publications.

Additionally, you should attend a few industry seminars ("to see what the new toys are") such as NAB (National Association of Broadcasters, www.nab.org) and look for local chapters of engineering groups like SMPTE (Society of Motion Picture and Television Engineers, www.smpte.org), Society of Broadcast Engineers (www.sbe.org), and the Institute of Electrical Engineers (www.ieee.org).

With the skyrocketing increase in popularity of digital and high definition film and videomaking, you can surely perform a "techknowledgey" gear-up at resources like RES (as in "high res" and "low res", www.res.com), Digital Video (www.dv.com), American Cinematographer (www.cinematographer.com), and EditorsNet (www.editorsnet.com). These sites can help you be better prepared to advise your clients on equipment, style and technical options.

While Donlin’s favorite part of being a PE is seeing the results on a huge TV screen at a convention, the most frustrating is "telling clients precisely what they need and having them say no, and then hearing horror stories that what they did completely failed because they wouldn’t spend the extra hundred bucks."

"[Don’t] be afraid to take chances," Donlin urges. "It’s important to be bold and brash on your client’s behalf." Know your equipment and listen sincerely to your clients’ needs, Donlin adds, and you too can be an effective, in-demand production engineer who stays a step ahead of fear, uncertainty, and doubt (the FUD factor) one project at a time.