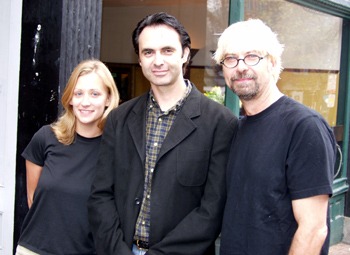 Five Days of Film and Foliage

Share
MovieMaker Magazine, located in Portland Maine, gears up for the debut of its new, exciting film festival, the Portland Festival of World Cinema.

"Our ultimate goal in creating this festival is to increase film education and film awareness in the area," says Wood. Portland is a historic, seaside gem on the rugged New England coast that boasts a busy working harbor, charming cobblestone streets, and a bevy of local artists. An infectiously informal atmosphere punctuates its Old World allure.

Portland is also the home to MovieMaker Magazine, a serious film publication sans Tinseltown glitz and glamour that is often read by famed directors like Spike Lee and Martin Scorsese. Rhys started the magazine in 1993, and recently moved it from Los Angeles back to his hometown.

"When I came back I realized there really wasn’t a lot of opportunity to see world cinema in Portland," he says. "If you can’t be in a place that has the opportunities, you have to make your own. So, that’s how the idea for the festival came along."

When Wood, MovieMaker’s Managing Editor, moved from Boston, the two began collaborating on the event. Tuesday night meetings at the local pizza shop garnered ideas and working sessions that kindled their vision, catapulting it into reality (even though neither of them has ever run a film festival).

"MovieMaker has sponsored close to 100 festivals," says Rhys. "We’ve taken the best of other festivals, the things we like, put them into a pot, stirred them up, and this is what we came out with." 60 films are scheduled to run this year.

The Portland Festival of World Cinema opens with the U.S. premiere of "One Eyed King," written and directed by Robert Moresco and starring Armand Assante, William Baldwin, Chazz Palminteri and Jason Gedrick. The only morsel of information the festival directors will whisper about this flick is that it’s a crime drama, and some of the cast could show up to show it off. And just as all big events deserve a spangled celebration sprinkled with a little bit of stardust, an open-air gala follows the screening.

Aside from "One Eyed King," Avi Nesher’s "Rage and Glory" is the film generating the most buzz. It deals with terrorism, the subject anxiously penetrating all of our minds, and will electrify audiences on the festival’s closing night.

"[Nesher] used to be an Israeli general," says Rhys. "It was made about a band of rebels fighting to expel the British from formerly Palestine, right after WWII, so that they can create their own Jewish State." Nesher is speaking at the festival and all of the screening’s proceeds will be donated to the American Red Cross.

On top of the fresh locale and these two hype-worthy films, what makes this festival tick is a cozy compilation of events, sidebars and prestigious awards planned to dazzle both attendees and filmmakers alike.

Film-noir, Italian cinema, classic international children’s films and Maine-made movies give this fête it’s own brand of sublime charisma. Each of these sidebars is running throughout the festival in conjunction with brand new independents, international and domestic features, and several shorts. "I don’t know if any other festival in the world has quite this mix," laughs Rhys.

But that’s not all. Capitalizing on Southern Maine’s own claim to fame, the first annual John Ford Lifetime Achievement Award will be presented to a "true cinematic visionary."

"John Ford had such an enormous body of work, and one thing that he was heavily involved in was documentaries," explains Wood. "So, to highlight that aspect, and also because he’s obviously very deserving, we are presenting the award to Albert Maysles on Thursday."

"We believe he is the preeminent documentarion alive today," adds Rhys.

Screenings of "Gimme Shelter" and "Salesman" emblazon a daylong tribute to Maysles, as well as a documentary panel discussion led by the master himself. A group of John Ford scholars are coming to discuss his work and an official award presentation is planned.

Accolades for all of the usual suspects, including best director, editor, screenplay, cinematographer, actor and actress, will also be honored. There is a screenwriting award, dubbed the Henry Wadsworth-Longfellow award (another Portland native), the Kathadin Award for the local filmmaker who has achieved the highest point in filmmaking, (named after the highest peak in Maine) and the MovieMaker Breakthrough Award for the best feature filmmaker.

In addition to a panel of six judges, three from MovieMaker Magazine, one from the American Cinema Editors Guild, an independent producer and a local theater owner, festival-goers will have a chance to vote for a special audience award.

There is even time for extraordinary events amidst all the hoopla. A special midnight movie series, a cruise on Casco Bay and a screening on one of the nearby islands, are just some of the goodies planned to delight attendees. And for those looking to mingle with celebs, Stanley Tucci ("America’s Sweethearts," "Sidewalks of New York"), Brad Anderson ("Next Stop Wonderland," "Session 9"), Academy Award-nominated actress Karen Black, and Mark and Michael Polish ("Jackpot" and "Twin Falls Idaho") are among the notables attending so far.

Rhys predicts that anywhere between 5,000 -10,000 people will flock to Maine to marvel the intoxicating films and foliage. Portland is ready to illuminate its gifts.

"It’s really all about bringing films and filmmakers to Maine," says Wood. "It’s bringing people here, but also, giving the people who are already here, a little taste of the film industry."