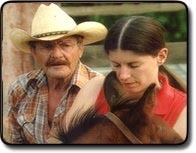 The Blind Leading the Blind

Share
A review of David Sutherland's film 'Out of Sight.'

"I think people are ready for a story about a blind woman who’s raising a family or having a career or both," says Diane Starin, the focus of documentarian David Sutherland’s 1993 film "Out of Sight." "What I wonder is if they’re ready for a blind woman who’s in her thirties living with a man who’s in his sixties, in a relationship that deals with alcohol and infidelity. In other words, I don’t know if America is ready for a blind girl who isn’t a goody two-shoes." Indeed, Diane hardly fits anyone’s stereotype of a blind woman, and Sutherland’s film takes pains not to gloss over her coarser personality traits.

At the time of filming, she shares a home with Herb, a man almost twice her age who has been both her lover and an unacknowledged father figure of sorts. When Herb was first diagnosed with terminal cancer, he was given six to eight months to live. Diane, who had recently split with him, decided to move back in to help him through his last days. This was four years ago. Too willful and headstrong to devote herself to him till the end, and too practical to leave him and risk losing his inheritance, she suffers through an endless purgatory of her own making. She cheats on Herb regularly to keep herself sane and speaks candidly with her friend Jillian about her lack of affection for him.

Of course, Herb is no angel either. She and Herb met through their love of horses, and things were progressing along the usual lines — until he decided to sell the house and drive the two of them on a two-year "sightseeing" trip in his pick-up truck and a six-foot camper. He would start drinking early, and by the end of the day was a MADD member’s worst nightmare. Any infidelities Diane has committed (and there are apparently not a few of them) were provoked by his mistreatment of her, or so she reasons.

Diane’s most successful relationships portrayed here are with women—more specifically, Jillian and her mother. They ask each other advice, offer consolation, and head out for evenings of fun. In contrast, the men here are for the most part uncommunicative and hardly intuitive. Her stepfather Ziggy can only explain his dislike of her by saying he doesn’t like "the way she does things." Herb acts as if he was unaware that she was miserable with him for so long, and Patrick, her newfound love, seems blissfully unconcerned with the bind she’s in.

It’s impressive to see Diane function so skillfully in the physical world (and quite a disgusting thrill to see her plopping her fake eyeball in and out). But it’s more fascinating to see how Diane and those close to her function so poorly in the arena of emotion. "Out of Sight" is a complex film about a complex woman and the interesting assortment of characters she has gathered around her. Not only will it change your image of blind people, but it subtly forces you to reevaluate your assessment of humanity itself.