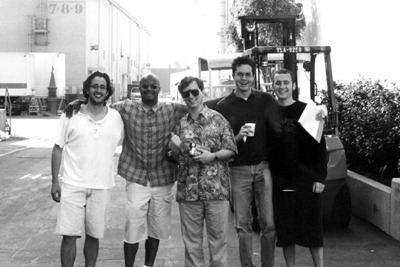 On the Other Side: Indie Spirit in Hollywood

Share
This new series, On the Other Side, will introduce you to New England filmmakers now working on the West Coast. Here, Connecticut filmmaker Dan Settani shares his thoughts on L.A., Sundance and keeping the indie spirit.

So you’re thinking about making films in Hollywood but you’re not sure what you’re up against, eh? Well hold onto your hat, because NewEnglandFilm.com is taking you on a trip to the other side, the West Coast, that is. This new series, On the Other Side, will introduce you to New England filmmakers who are working in the movie business on the West Coast. We’ll follow their successes and their failures, and demystify a dream that is summed up in one word, Hollywood.

"What did I do?!" was Connecticut filmmaker Dan Settani’s recurrent thought as he sat in his empty Los Angeles apartment. Which, by the way, he paid for with the modest amount of money he’d received from cashing in an insurance policy in order to finance his move West.

"No job, no money, most of my friends were back East, I thought I had really screwed up," says Settani.

It took some time, but Settani eventually settled into his new West Coast digs and began to focus on the reason he relocated to Los Angeles in the first place — filmmaking.

Settani’s first directorial venture, in which he also starred, is the critically acclaimed short film "The Night Ferris Bueller Died." The 29-minute, 16mm film is a dark comedy about a deadly case of mistaken identity that arises when an obsessed fan believes he has come face to face with actor Matthew Broderick on a New York subway.

The AtomFilms.com Pixie Award nominated film was conceived as a result of a bizarre phone call Settani received from a fan while he was performing a one-man show in Waterbury, Connecticut at the Seven Angels Theater.

"The guy claimed to be a big one man show fan and was interested in getting tickets to my performance," said Settani. After a few minutes of conversation Settani realized that his newfound fan might be a little obsessive, or even worse, borderline psychotic.

"He told me he had met Eric Bogosian on the subway and he was a real jerk. He then proceeded to go on about how he also met John Leguizamo on the subway as well and he was pretty cool." The phone caller became increasingly manic and suggested that he could come to Settani’s house and pick up tickets to the show himself since he knew Settani’s address. Luckily he never came.

"After the show I couldn’t get the experience out of my head," said Settani.

The film was accepted into several film festivals but failed to make it into the major festivals, most notably Sundance.

Settani was hard on himself. "I was naïve," says Settani. "At first I was a bit arrogant and ignorant about the whole process," he says. "I was like, ‘The title alone should get this film into the festivals!’"

"It’s kind of a harsh film. It’s a bit of a reactionary piece, but comical," laughs Settani.

Shot on digital video, the mockumentary/documentary is currently in the editing stage and features cameos by Todd Bridges of Different Strokes fame, and popular adult film star (and Howard Stern regular) Jenna Jameson.

Although Settani has found a group of people to collaborate with in Los Angeles, he plans on shooting future projects in the New England area.

"People at home get excited and are more than happy to help out when you are shooting a film in the area," he says. "There are incredible locations in Connecticut and New England. And a lot less red tape involved than shooting in Los Angeles."

Settani highly recommends having some films on your resume before you make the venture to Los Angeles. "Stay put and make films at home and come out to Los Angeles when you have some films under your belt," he says.

Settani currently calls Hollywood his home, but don’t expect him to be helming the next studio blockbuster anytime soon. Settani values keeping the creative control surrounding his projects and would like to continue finding his own financing, even if it means burning a hole in his own pocket. "If your first priority is making money, you are not someone who cares about the movies," he says. "Although I’m at an age where I should care more about money my mother says," Settani jokes. "I worked 80 hours a week at three jobs and withdrew funds from my 401k to finance ‘The Night Ferris Bueller Died.’"

Settani is definitely a determined filmmaker with a plan and likes to keep his plate full.

Next on Settani’s agenda is the screenplay "Opposite Al," a story about an actor forced to make a decision between family and career. Settani is currently working on this project for a class at UCLA. Not surprisingly, Settani plans on directing "Opposite Al" and while he’s at it, star in the production as well.

Who knows? Maybe this will be the one that makes it into the almighty Sundance.