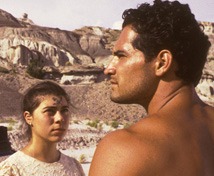 Share
A review of the film, 'The Mad Songs of Fernanda Hussein,' screening as part of the MFA's New England Film Artists Present series.

The Gulf War seems to occupy an ambiguous space in the collective American consciousness. Most people old enough at the time remember what they were doing when they first heard of the bombing (I sat dismayed in the lobby of my college dormitory). But that moment could never be said to have the prominence of a Pearl Harbor or a JFK assassination — nor even a Nixon resignation, a man on the moon, or an exploded space shuttle. The Gulf War cannot claim to have infected the American soul as much as Vietnam. And yet the Gulf War was, indeed, a full-fledged war, with all the accompanying political, ethical, and social consequences. And its resolution — or lack thereof, despite the apparent triumph — makes these consequences both more lingering and more shameful to admit.

John Gianvito’s new film, "The Mad Songs of Fernanda Hussein," explores the domestic effects of the war through the separate stories of three individuals whose lives intersect only briefly but all share a common thread: the war has changed their lives. In the first tale, which starts before the war, Fernanda (Thia Gonzales), a Hispanic woman separated from her Arabic husband, searches for her missing children. As the pre-war tensions have increased, the family has been subject to repeated racist vandalism, despite the fact that Fernanda’s husband is from Egypt, not Iraq, and her kids speak with as American an accent as you can get. When Ameer and Asher fail to arrive home from school one day, Fernanda can only fear the worst.

The second tale to be introduced opens as Rafael (Dustin Scott) and his parents watch the first reports of the bombing on television. Encouraged by his high school teacher, Rafael becomes active in the anti-war movement, causing a rift in his family that ultimately becomes irreparable.

The final tale begins with the return of Gulf War veteran Carlos (Robert Perrea) after the war has ended. His alienation is evident from the start, especially when friends tell him how proud they are of him before asking him how many "A-Rabs" he bagged. Gianvito weaves their stories, all set in New Mexico, into a complex tapestry that shifts between tales, back and forth in time. His camerawork is patient and unobtrusive, allowing the actors and setting to convey the character’s frustration, anger, and despair. The scenes seem to unfold before our eyes, slowly gaining weight and meaning as they evolve; and the documentary footage interspersed throughout add a feeling of reality rare in such a film.

There are so many excellent moments in the film that it’s a shame Gianvito, perhaps reluctant to cut scenes or unsure how to dramatically and thematically link his story lines, can’t quite pull it all together. The three stories are augmented by a real-life performance by oud player Naseer Shemma, a brilliant performance that I’m happy to have witnessed, but still, it feels tacked on. His film clocks in at close to three hours, and the last half-hour or so drags, partly due to the sheer length but mostly because the film meanders at times, never resolving itself completely. Worse, wonderful stretches in which the character’s conflicts are powerfully conveyed in actions and statement are regrettably punctuated by segments of contrived, expository dialogue. Here’s where the actors — otherwise quite good — slip up, as if unsure how to deliver their awkward lines, able only to stammer through them as best they can.

Regardless, "The Mad Songs of Fernanda Hussein" is a powerful and important work, and Gianvito clearly establishes himself as a writer/director to watch. The multi-faceted complications of the Gulf War are deserving of artistic and political consideration, and Gianvito’s exploration, despite its flaws, is eye-opening, moving, and rich with meaning. Highly recommended.