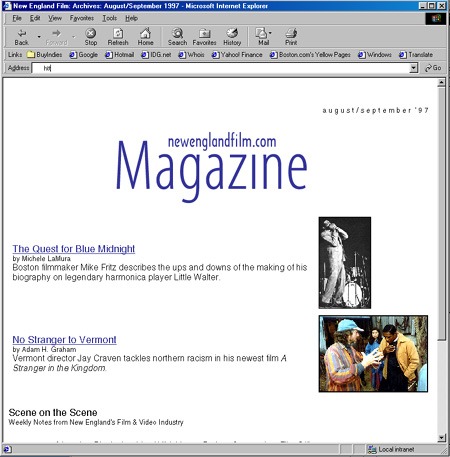 Share
It's been four years this month since NewEnglandFilm.com first launched. Read about how it all began in this interview with the site's founder and publisher, Michele Meek.

From a mere four pages at the start, to over 4,000 now, NewEnglandFilm.com has grown into an indispensable resource for filmmakers. Despite some pessimism at the start from those who thought it would never work, NewEnglandFilm.com is proud to be celebrating it’s four-year anniversary this month. To honor the occasion, NewEnglandFilm.com (NewEnglandFilm) caught up with the site’s founder and publisher, Michele Meek, to reflect on the founding of the site and the impact that it has had on the filmmaking community.

SH: What sparked the idea for NewEnglandFilm?

Meek: After graduating from Emerson College, I wanted to go into documentary filmmaking instead of publishing so I was trying to figure out: what are the companies, how do I get a job, and what are the events that are going on so I can meet people? I realized by being in that position that there really wasn’t a comprehensive resource. Even though there are a lot of really great organizations like BF/VF [Boston Film/Video Foundation] and CID [Center for Independent Documentary]; there wasn’t a place that you could look to find events, jobs, news, or articles — to find out what companies existed and what they were doing. It seems like everything happened through word of mouth — which seemed inefficient. So at that point, I started getting interested in a print magazine and I asked around and did some research. But the costs of starting something in print were prohibitive — you need to either have a lot of cash or have advertisers up front. So some friends of mine suggested that I start it as a Web site and if it became popular enough, I’d be able to convert it to a print magazine. But of course, then the response was so positive to the Web site, I realized that it would not have worked as well in print.

SH: What do you think was your biggest fear once you decided to do this?

Meek: You’re always afraid of failing and I thought to myself, ‘Well what if this doesn’t work? What if I put in all this energy and I talk it up to people and work on it for a long time, and then it’s just not happening?’ So I tried to imagine that and I thought, ‘Well, I wouldn’t think anything bad of someone who had made an effort to do something and it didn’t work out.’ So I guess that eased my fear. Other than that, I really didn’t have any other fears.  I didn’t really know what I was getting myself into or I might have been more afraid! I didn’t know how much work it was going to be or how much attention it was going to require and that it was really going to be changing my whole life — my career.

SH: Was there anyone who was particularly helpful in the beginning?

Meek: Yes, Geoff Meek. In the initial stage he really did a lot to get the site set up the way that it is. He built the whole Industry Directory, the banner ad system, the events database, and basically the whole technical structure of the site as it is. And that’s been really valuable. I think that I sometimes don’t even realize how lucky we are to have someone like him because he is very efficient and knowledgeable — he simply does it right the first time.

SH: Have you been surprised at the positive response to NewEnglandFilm?

Meek: I was very surprised at the response [in the beginning], now I’m less surprised.

When we launched, it was especially great. People would e-mail me and say, ‘This is such a terrific resource, thanks so much for putting this together.’ We got so much positive feedback. No one ever said anything negative; people really rallied around it and wanted it to grow. That was such a warm, fuzzy feeling. It was hard to resist working on it and making it better when there was an audience that was so appreciative of the fact that it even existed.

SH: What is the mission of NewEnglandFilm?

And I think at the same time we have tried to maintain high standards of quality, sometimes they are little things but I think they are things that matter. For example, we have had people who have tried to post jobs for waitressing for actors and I said ‘no.’ The actors in this community are not interested in seeing those kinds of jobs in NewEnglandFilm.com — they are looking for acting jobs.

SH: What have been the biggest challenges to making NewEnglandFilm.com successful?

Meek: I guess the biggest challenge is that we have always had such limited resources — limited people, limited time. You just have to be really efficient. You don’t have much time or money to make mistakes — you need to do it right the first time. I guess I like that because after doing NewEnglandFilm.com I started BuyIndies. So I like the start-up phase of things and I think if I got too comfortable in it, I probably wouldn’t like it anymore.

SH: What is the role of the writers, aside from the obvious?

Meek: I like for the writers to be able to uncover new stories and new ideas and I think to demystify [filmmaking] a little bit. I think of the audience of NewEnglandFilm as being a savvy audience. I mean if you think of Peter’s articles [Peter Bohush, you know, our tech guru], those are clearly directed at people in the field right now making and editing films. Whereas some of the things that we have done, like Lorre’s series ["First-Hand Adventures of a First-Time Filmmaker"] is more about ‘How does it work?’ Or, the "How to Be" series — providing practical information that is entertaining and informative. I definitely like for the writers to draw attention to the things that are really special about the local industry.

Without the writers there would be no News section at all. I think we have been incredibly lucky and I’m not sure why. We’ve always had very good writers. I remember that there was in article about NewEnglandFilm.com in the Phoenix and one of the things that they noted was that the writing was so good. They were surprised because many times the writing is secondary to information in online publications.

I know that many of the writers build up clips and go on to write at other publications. They also get a get a chance to meet different types of filmmakers and pick their brain with questions that they have. We’ve been really lucky too because we have had some writers that have been writing for years — which is amazing! That really speaks to how much they love what they are doing.

SH: Last year, you were awarded the Women in Film/Video Image Award. How did that feel?

Meek: At first, I was actually a bit uncomfortable because the whole point of WIFV is that they honor filmmakers. And even though I have made some films, that’s not why I was getting an award. I guess I felt that there are so many talented women filmmakers that it didn’t seem fair to me in a way. It was as if I was taking it away from someone else. But, you know, as I thought about it more and talked to people about it, I understand the motivation behind it because NewEnglandFilm.com affects a lot of women filmmakers. I think that naturally without even thinking about it, we have been very equal in our coverage of men and women. Obviously though, it felt good. It always feels good to know that people think what you do is great.

SH: Where do you see yourself in five years?

Meek: I have a lot of personal goals as well as professional goals. I guess both factor into where I see myself in five years. Professionally speaking, I really like the small start-up, business-type stage, which I could really see NewEnglandFilm staying in indefinitely because I don’t see it as ever being a big business-type opportunity. I would also like to make time to go back to doing some of my own filmmaking projects. I have definitely decided not to start any more business — at least for the next year or two!

SH: What are you most proud of?

Meek: I guess the thing that makes me the most proud is when individual filmmakers get back and say ‘Thanks so much for creating this resource,’ or, ‘I found a job through NewEnglandFilm.’ For example, the other day I called David Sutherland Productions and an intern answered the phone. I was talking to them and they said, ‘Oh I know NewEnglandFilm, actually I got my internship here because I saw the opening on NewEnglandFilm.’ That’s amazing to me, that makes me proud.