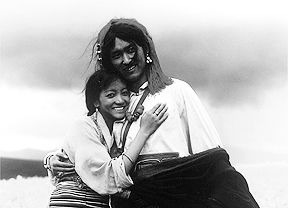 Share
Despite its short history, the 2001 Rhode Island International Film Festival is quickly making a name for itself as one of the best film festivals in the country.
One year ago the Rhode Island International Film Festival (RIIFF) was a small but well-respected festival known within the industry for tirelessly working to help filmmakers with their careers. And while this is still the case, things are changing fast. After being profiled in a widely read festival guide and launching a sophisticated, award-winning Web site, RIIFF has reached a new level of status and prestige within the industry.

Among the many exciting events at this year’s festival will be an appearance by Hollywood director Blake Edwards, who will be on hand to accept a Lifetime Achievement Award for his work. Director of legendary films such as "Breakfast at Tiffany’s," "The Pink Panther" series, and "Victor/Victoria," festival managing director Betty Galligan says Edwards is "more than thrilled to accept the award." Edwards will receive his award at the festival’s Opening Night Gala on August 8, to be followed by a screening of one of Edwards’ films and a post-film party that is open to the public. His wife, actress Julie Andrews, may also be in attendance, if her schedule allows. The festival will also be dedicated to the memory of legendary actor Jack Lemmon, who passed away in June and who starred in several of Edward’s films.

In the past year, RIIFF has really come into its own. The five-year-old festival has always had strong credibility among filmmakers for helping them find distributors and make connections within the industry, but the festival got a major boost after being featured prominently in the 2001 "Ultimate Film Festival Survival Guide." Entries are up 40 percent this year, Galligan says. The festival was given a two-page spread in the Guide, while most festivals — larger ones than the upstart RIIFF — get only a column or two. RIIFF was also ranked among eight "Best Kept Secret" festivals, among several other festivals that have been around since the 1960s, and was labeled a festival that "aggressively supports its filmmakers."

"We’ve always been known as a filmmaker’s festival, but this has given us a level of prestige that we couldn’t have asked for," Galligan says. "The quality of films submitted has gone way up and we are now much more international than before."

Indeed, entries were up 40 percent for this year’s festival, which will feature films from 37 different countries including: Argentina, Australia, Brazil, Bangladesh, China, Germany, Iceland, Israel, Russia, Slovenia, South Africa, Sweden, England and Yugoslavia. Over 15,000 people are expected to attend the screenings, which will also include 42 world premieres and 20 U.S. premieres.

Meanwhile the festival’s new, highly interactive Web site, which debuted at Cannes and is now used as a prototype for other festival Web sites, will be featuring its own virtual festival during the actual festival, carrying live webcasts of interviews with filmmakers, and QuickTime movies. Eventually judges’ comments will also be posted there so that filmmakers can get feedback on their films.

"The Internet is now our biggest marketing and communications tool," Galligan says. "It’s night and day from last year. If we had this site last year, we would have had 800 entries." The Web site also offers online registration and ticket sales.

This year, RIIFF has announced a special focus on women filmmakers, in addition to a one-day sidebar on Gay and Lesbian films. Films made by women will be featured prominently throughout the festival, and there will also be a one-day panel discussion entitled "The Biological Factor: Women Filmmakers in a Man’s World." Guest panelists will include actress Melody Patterson ("F-Troop"); Australian filmmaker Beth Armstrong, who is making her US debut at the festival with "Cheek to Cheek"; Eva Saks, award winning filmmaker also making her world debut at the festival with "Family Values"; and Barbara Morse, Health Reporter for NBC news (WJAR TV 10).

Galligan says the festival has always received a large number of films made by women, and that it was simply time to call attention to that fact. She relates the story of a female filmmaker and producer who says that when she introduces herself, people first assume she is an actress rather than a filmmaker. "Women are a strong force in the filmmaking industry but they have not been able to experience the same identification with the title as men," Galligan says. "It’s what women face in many industries — you’re not a man so you can’t possibly be a director or producer."

George T. Marshall, RIIFF’s Executive Director, adds that women filmmakers and writers play an important role in the social forces that shape our culture by using their work to attack media stereotypes and instead portray women as three-dimensional, complex human beings. "We are committed to improving the status of women, both on and off the screen," Marshall says. He adds that the aim of the Women in Cinema focus is to promote better representation of women, help women filmmakers with their careers, and raise women’s’ issues.

One of the many films by women being screened at RIIFF is "All Over the Guy," a twenty-something love story about modern dating made by Julie Davis. It stars Richard Rucculos ("Two Guys and a Girl"), Sasha Alexander ("Twin Falls Idaho"), and Adam Goldberg ("Saving Private Ryan"), with cameos by Lisa Kudrow, Christina Ricci, and Doris Roberts.

Other notable films being screened include the East Coast premiere of the Chinese film "Song of Tibet," an epic story shot solely with Tibetan actors and with 90 percent of the dialogue in Tibetan. The film, made by Chinese director Xie Fei ("A Girl from Hunan"), offers a rare glimpse into a culture that is rarely represented on screen.

Schedules can be found at the festival’s screening venues which include: the Avon Cinema, List Auditorium, RISD Auditorium, the Columbus Theater and Studio Cinema, South County Center for the Arts, and the Opera House in Newport, where the "Best of Fest" films will be shown after the festival on August 13th. There will also be an insert in the August 2nd issue of the Boston Phoenix, and the schedule is available online at the festival Web site, www.film-festival.org