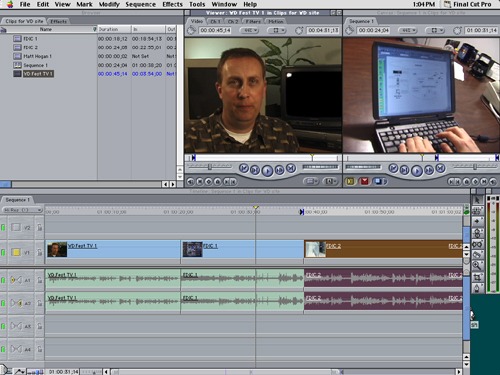 Share
With Version 2, Final Cut Pros growth from infant to toddler has brought about many new and exciting enhancements.

Introduced in 1999, Final Cut Pro quickly earned the respect of professional and amateur editors and has become the app to beat among non-linear editing programs. Apple worked hard to build customer confidence in its product. At the introductory tour of Final Cut Pro I attended in Boston two years ago, a room full of editors and multimedia designers hammered Apple with questions about Final Cut Pro relative to the plusses and minuses of other NLEs [Non-Linear Editing Systems].

One by one, Apple displayed how its Version 1.0 tackled and overcame the problems associated with its competitors, and how it offered new and improved editing features. The group was blown away by the simplicity, power, and clean user interface.

So what was left to add in Version 2? Is this version an evolutionary or revolutionary update? The answer is a little of both. While Apple got it mostly right in Version 1, and its 1.2 and 1.25 updates, Version 2 addresses the desires of the heavy professional users. Like a James Brown show, FCP 2 gives and gives some more.

New features in FCP 2 include:

Now anytime I hear the words advanced and management used together, a whole string of other oxymorons comes to mind: military intelligence, jumbo shrimp, senate ethics, and compassionate conservatism. You get the idea. But Final Cut Pro delivers on its claim of managing the media files users invariably scatter throughout their drives.

After a year and a half of editing various versions of my movie "Geezers," I had created literally hundreds of media files. Starting on a PC, I migrated many of these audio, video and sound effects files to my Apple G4 when I switched to Apple Final Cut Pro 1.2.

During the past year all of my six hard drives needed to be reformatted at one time or another, which called for moving the files around again and again. By the end of all this moving, I had dispersed these files, and also copies of many of them, across all the drives and into many subfolders.

I finally took a day and did some media management. I moved all the associated Geezers files onto one drive and into their proper directories, deleting all the duplicate files (except for backups of the most important files.) When I opened the Geezers project file in my newly upgraded version 2 of Final Cut Pro, I waited for the program to tell me it couldn’t find the media files and to expect long hours of misery rebuilding my project.

Instead, Final Cut Pro 2 asked if I’d like to re-link the media files. It then searched my hard drives and found the files in their new locations — including the program’s own render and scratch files — and quickly linked them all back into my project. Beautiful.

There was one short audio file that got lost in the shuffle of moving files around. I simply selected the file’s name in my Final Cut Pro project bin and told FCP to recapture it. With the appropriate source tape in my VTR, the program queued up the tape and recorded the scene again. The spots in my project that had referenced this file automatically linked up to the newly captured file and everything was good to go. Total time: about five minutes.

To appreciate what happened here, imagine taking all your socks out of your dresser, moving them into different rooms of your house, then moving into a new house, opening your dresser back up and telling it to go find and fetch your socks from around your new house. For those of us who can’t even manage to get one pair of socks into and out of the dryer without losing at least one of them, this is an astonishing feat.

Final Cut Pro, with its ability to use After Effects plug-ins, is a compositing workhorse as much as an editing application. All but the most advanced compositing can be done right in Final Cut Pro. In one example, I found it actually easier to add CineLook and CineMotion filters from within FCP than After Effects. The result was flicker-free, as FCP auto-matched the field settings, while I floundered around in After Effects trying to match up the proper output settings.

If you need to work in After Effects, Final Cut Pro offers a nice way to work with source files without making extra rendered movies. Using the Export Final Cut Pro Movie command creates a small reference file to the original source clips and any rendered sections. This movie file is much smaller than a full QuickTime file, yet it can be imported into After Effects for non-destructive editing and compositing. The After Effects file will need to be rendered out as a QuickTime, but this is only one rendered file instead of two.

If there was any doubt that Final Cut Pro is a pro-caliber application, the 1,400-page manual puts that to rest. Apple took the time and killed lots of trees to explain in detail nearly every aspect of working with FCP 2, including 11 pages on working in wide screen format, a 12-page glossary of terms and a 54-page index! I guess a killer app needs a killer manual.

Final Cut Pro includes QuickTime Pro, Cinema 4D GO, Commotion DV, Cleaner 5 EZ and EDL Access software. Due to the editing/compositing features of Final Cut Pro, its integration with other programs such as QuickTime, DVD Studio Pro and After Effects, plus its total reliance on the G4 platform, Apple considers Final Cut Pro’s main competition to be high-end editing systems from Avid costing tens of thousands of dollars. At $999 ($249 upgrade) it’s a steal, and a fully tricked out G4 system with FCP and DVD Studio Pro will cost less than $5,000, a price point even generic PCs will have a hard time beating. Final Cut Pro is unequaled among non-linear editing applications at any price.