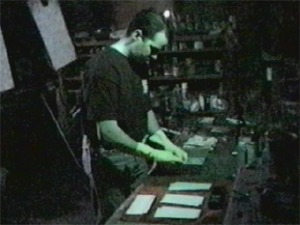 Share
A review of the film 'Green' by Marc Powers.

Just when you think you’ve sat through your last Tarantino-inspired crook manifesto, you find another one aimed straight at you. Marc Powers’ "Green," set and filmed entirely in the Boston area, is the latest entry, complete with bickering, two-bit crooks, episodes of altered consciousness, and — of course — a few guns here and there.

Jobless deadbeat Scott (played by producer/director Powers) stumbles upon a miraculous find one evening, after breaking into his parents’ house, pocketing some money from his mother’s jewelry chest, and dabbling with chemicals in the basement. He discovers a way to bleach the ink from a one-dollar bill. Whitening your dollars, no doubt, is not the most frugal practice for the unemployed — not unless you intend to reprint them as 20s, that is. Together with life-long best buddy Steve (Stephen Burke) and graphic artist Wayne (Marc Colucci), Scott hatches his scheme. Scott supplies the paper, Wayne provides the computer know-how to enable Steve to print, and the three of them make money the best and fasted way they know how. Things get a little hairy when Scott shacks up with Wayne’s ex-girlfriend Caitlyn (Desarae Powers), but the bonds of friendship don’t get really tested until the expected greed, plotting, and suspicion ensue.

The backdrop for all this is the world of suburban-Boston townies, local tough guys who sit around playing video games, intoxicating themselves with cheap beer, complaining about their shitty jobs, and arguing. Indeed, this motley crew hurls enough venom at each other to kill without weaponry — and this is what goes on between the friends! This should be nothing new to the townie crowd, not in a city where a shouted curse, accompanied by spittle and a flushed and throbbing forehead, is a true sign of love and/or respect. And it is in this harsh friendship that "Green" is most successful. Who cares about some get-rich-quick plot when you can watch grown men nearly come to blows over whether it’s okay to call the Fleet Center the Boston Garden?

It’s a good thing this crew is so grotesquely entertaining, because the film certainly has its faults. The picture and sound quality are economical (meaning the entire movie was shot on video), and the editing is at times noticeably awkward. The folks on the screen seem to be playing themselves more than acting. As far as the story goes, there are plausibility gaps here and there, the relationship between Scott and Caitlyn is sketchy, and the film ends abruptly, with much of the conflict unresolved (although maybe this is an innovation). Thankfully, the visuals are less bloody than promised.

But "Green" succeeds in an unexpected (and perhaps not entirely intended) way; it portrays, in harsh honesty, the bitter, tedium and reeking-with-failure desperation that leads to crime. Confronted with a lifetime of dead-end, low-paying jobs, Scott turns to theft almost instinctively. In truth, the green here is as much about envy and (socioeconomic) nausea as it is about cash. Try cashing that at the bank.