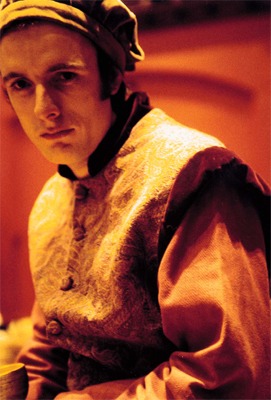 The Writer, the Novel, and the Filmmaker

When meta-narratives (stories-within-stories that shed light on the nature of storytelling) came into vogue in the fiction of the radical, post-modern ‘60s, stodgy realists everywhere cried foul. Anything "meta" was self-conscious, overly intellectual gimmickry. Metafictionalists were mere rabble-rousers, trying too hard to achieve something new. This criticism, although often astute and justified (much of that metafiction was pretty darn passionless), ignored the fact that such fictional devices were hardly revolutionary, having existed since the beginnings of fiction itself.

These days, meta-narratives have become so co-opted by the mainstream — of both fiction and film — that they seem old hat. Yet people keep coming up with fresh takes on the method.

Enter "The Book That Wrote Itself," Liam O Mochain’s film about the filming of a reenactment of a novel. The action centers around aspiring writer Vincent Maclen (played by O Mochain himself), who appears to be a quite horrible fictionalist. His, uh, masterwork — a "Celtic-warrior-type novel" set 200 years ago, features a hero who must perform several fairy-tale-like tasks up and down the Irish coast in order to win the hand of the King’s daughter. In the end he completes the tasks, only to be betrayed when his faithful sidekick runs off with the girl.

This is a work that can reinterpret the past’s values in the context of "the profound chaos of modern times" and, Vincent explains in a panicked outpouring of near-gibberish, incorporates all genres of fiction to boot, from romance and drama to historical and horror, with a touch of comedy thrown in for good measure. Needless to say, the publisher he shares his work with arrives at a fitting on-word description: "Shite!"

Undaunted, Vincent tries a new tack: he will prove his Celtic novel relevant to contemporary life by filming a real-life reenactment of his hero’s quest. All he needs is a cameraman willing to work for low pay. He finds Ashling Arrigan (Antoinette Guiney), an alluring amateur filmmaker who seems as unreliable as the novel’s "faithful" sidekick. Under the pretense of filming Vincent’s reenactment, she’s working on a project of her own, an "American Movie"-style documentary on a deranged and deluded pseudo-artist (Vincent) at work. The two set off, traveling from town to town along the coast of Ireland. Vincent performs contemporary versions of his hero’s tasks, most of which involve some sort of thievery, and Ashling records the events he asks for — and many he doesn’t.

What we get from all this is a fast-and-furious, chaotic, at times befuddling, but ultimately endearing road movie. Clever happenings abound as Vincent fumbles his way through his tasks — and moments of pure exhilaration come to life when he succeeds in unexpected ways.

Will Ashling eventually betray Vincent? Will Vincent grow weary, becoming aware of the futility of his idea? And who (or what) is the reward (the metaphorical princess) that awaits when the tasks are done? O Mochain is crafty enough to bait us with these questions, only to pull the rug out from underfoot when we start feeling comfortable. His entertaining, unpredictable film is not without flaws, but it wins us over with relentlessness and charm.