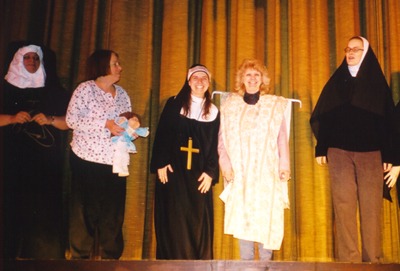 The Vocal Cords are Alive!

Share
Come on, admit it -- youve always loved 'The Sound of Music.' Find out about the latest and greatest version that screened at the Coolidge Corner Theatre.

My nun costume gets a workout as necessity dictates, and while wearing it on the streets of Brookline, MA last month, I saw many other posing penguins (some with Adam’s apples and goatees). I also chatted with puppeteers, children in lederhosen, women wearing straw hats and carrying guitar cases, and my mother, who was dressed in drapes complete with curtain rod. Yes, Liesl, it’s the "Singalong Sound of Music" tour.

I admit to wavering between pride and embarrassment when people ask about my favorite films. Especially being surrounded by filmmakers who often select the grittiest, most violent, somehow-always-mob-related movies as their most-worshipped. Then it’s my turn, and I practically have to refrain from singing it out. Fortunately, there is an amusing and highly satisfying outlet for people who appreciate one of The Greats, and I was able to experience it during a two-week run at the fabulous Coolidge Corner Theatre.

"The Singalong Sound of Music" production is one of the funniest, craziest, most outrageous theater experiences I have ever enjoyed. I laughed my wimple off. Unlike "Rocky Horror," this is an interactive show suitable for all ages and, instead of toast in the aisles afterwards, there is edelweiss everywhere. It’s one of the props you get in your goody bag, along with things like: an invite to the Captain’s Ball, a photo of Maria, a will-o’-the-wisp flash card, and a cloth piece of a window drape. If you know the movie at all, you can probably guess the exact moments these props should be used. But if it’s your first time, as was the case with my 14-year-old cousin, there is a host who rehearses prop usage and action cues with the audience prior to the flick.

The words then appear on screen (sans bouncing ball) throughout every song, even the ones the nuns sing in Latin. There is no excuse for not belting out a few choruses with your fellow viewers. My 70-something grandmothers hissed the Baroness, booed the Nazis and waved her edelweiss as much as anyone there. It’s heckler heaven (the challenge is convincing kiddies this is an exception and that it’s annoying to talk during "normal" movies — good luck). As much as people joked, there was a level of respect for the film that was palpable. No one said anything truly harmful; no one wanted to burst into song after the Nazi’s brought us down; and folks pretty much knew the words, attesting to their repeat viewings of the movie.

During a college semester in London, I made a point of visiting Salzburg, Austria to take the official "Sound of Music" tour (yes, there is one). I do-re-mi’d through the streets of Salzburg taking pictures of every location from the movie. It was a magnificent place, not to mention an effective lesson in how to use every corner of a city during filming. But the high point was undoubtedly when I had the opportunity to spin on "The Mountain" as only a true film lover would do.

See, because of "The Sound of Music" phenomenon and our current fad of shame over live-action musical films, we forget how important and how gorgeous a movie "The Sound of Music" is. That it honors a true story of finding love and sacrificing everything you know in order to overcome atrocities of war and prejudice. That the cinematography is rich and layered, with such beauty as the masterful use of shadow when the Reverend Mother tells Maria to climb ev’ry mountain. And of course, the vast, opening scenes leading up to that infamous mountaintop twirl, one of the most recognized cinematic images in existence.

To see this classic on the big screen in a wonderful old venue like the Coolidge was a dream come true for this filmmaker. No matter how geeky the dialogue, no matter how squeaky clean the portrayals, and no matter how many sisters at your parochial school forced you to watch it ’til you puked plaid, "The Sound of Music" was a splendidly-made film with a universal message that people connect with decades later. And a worthy reminder from the sweet screen to the tuneful people packing the seats, that life is not just meant to be watched — you’re supposed to sing along.