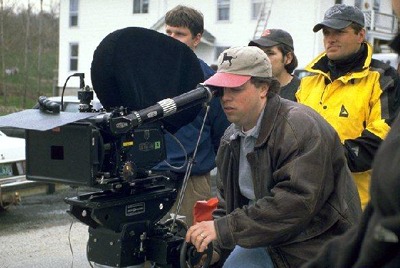 Filmmaking on the Edge

A light dusting of snow covered Edgewood Studios when I visited in mid April…inside and out. "The fake stuff…it’s tough to get rid of," explained David Giancola, Edgewood’s resident director and co-founder, "but it’s mostly gone now." Shooting had recently wrapped for Edgewood’s newest feature film, called "Trapped," which stars, among others, Beverly Hill 90210’s oldest teen, Gabrielle Carteris, as well as Jack Wagner. It’s about a family trapped in a ski chalet, and it required a load of snow, real and fake.

Yes, that’s right. Actual movies with actual stars are being made here at Edgewood, in the most unlikely town of Rutland, Vermont. In fact, at an average of three features a year, it’s perhaps the largest studio in New England. Yet Edgewood Studios, founded by Giancola and producer Peter Beckwith, is still hardly a household name. But then, neither are the films they make.

For one, Edgewood has yet to make a film for theatrical release. Instead, they’ve carved out a niche with direct to TV and video. They began by shooting action films with international appeal, with titles like "Radical Jack," and "Moving Targets."

And despite achieving the relative coup of becoming a nationally known film director without moving from his own backyard, David Giancola admits that the studio does not own complete artistic freedom. "They’re very smart in forcing you to make the movie they want you to make," he points out about the distributors that finance and buy Edgewood made films.

Porchlight Entertainment, the distributor for Edgewood’s last two films "Trapped" and "Lightning, Fire from the Sky" supports the "family disaster" genre of films. The formula consists of a family, which is having personal difficulties and is forced together in order to escape some sort of natural disaster. In the end they become closer to each other and work out their problems. Giancola jokes that he’s tried to think of new concepts for future films, but that Porchlight has already covered just about every kind of natural disaster imaginable, from flood to famine.

True, some of the work may not be Oscar quality, but Giancola makes no excuses. It’s pretty clear he loves making movies, no matter what they’re about. He’s happy to admit some of his films have been formulaic, and the acting occasionally sub-par. But he’s fiercely proud of the production value. That’s one area where Edgewood does not compromise.

"‘Radical Jack’ isn’t a bad movie. It’s an adequate straight-to-video flick, with good-looking actors, atrocious dialogue, cheesy action, and attractive scenery," said one reviewer on the Internet Movie Database web site. This is probably close to the same review that Giancola himself would give. But remember, as he likes to point out, all but one of their films has made a profit.

So what is it like making Hollywood films in Vermont? Of course there are limitations. For example, you can’t make Vermont look like New York City. And the weather isn’t exactly the same as in California. Just ask the cast and crew of "Trapped" who were actually trapped for two days during this year’s March snowstorm, with no way in or out of their mountain inn location. Luckily, everyone and everything they needed was in place, and they kept to the shooting schedule as if nothing had happened.

And the studio itself is not without its quirks. Shooting indoors at Edgewood may occasionally be interrupted due to noises from a nearby rail yard. But Giancola says Edgewood has never really had a problem working with big name actors. However, he asserts this is not by accident. "We go out of the way to treat them like gods, just so we don’t get the reputation of…being the North Pole." But usually they’re friendly, and get along well with the locals. In fact, during the filming of "American Gun," James Coburn went out partying with the crew. At 3:30 a.m. the police showed up, and 78-year-old James Coburn answered the door. They gave him a warning.

What’s next for Edgewood? The studio is currently in development for not one, but two submarine movies, to be shot on sets purchased from the movie "The Abyss." Why submarine movies? Well, it is Vermont. "In the winter, I have to make winter movies," points out Giancola. Unless it’s about snow, it needs to take place almost entirely indoors.

In any event, Edgewood will probably not be revisiting the straight action genre anytime soon. "How many car chases, snowmobile explosions can you do?" asks Giancola, adding that Edgewood has probably blown up about two dozen cars so far. He says that, personally, he’d most like to make a straight out comedy, but no one will finance them, because they don’t play well overseas.

Speaking of financing, Edgewood is also looking to take a step up in budgets. Their first film, "Time Chasers," was made for $150,000, but now films hover around one million dollars. They figure the next level of budget is about 3 to 5 million dollars. Perhaps this step will also coincide with Edgewood’s first theatrical release. But this is something they don’t want to rush. "Eventually," says Giancola about wanting a big screen release, "but it’s something that’s really dominated by the majors. I’ve watched independents get clobbered. It’s a really precarious situation."

Edgewood also wants to attract more outside productions. With their vast resources, including trailers, cameras, and lighting equipment, combined with the relatively low cost of shooting in Vermont, they "can help turn a $20,000 movie into a $50,000 one."

Where can you see Edgewood Films? "Trapped" will be on TV next summer. "Lightning, Fire from the Sky," with John Schneider (Bo Duke), and Stacy Keach, will be on TV late this summer on Fox Family Channel. "Icebreaker," which Giancola describes as "‘Die Hard’ at a ski area," will be on Showtime sometime in the future. "Radical Jack," with Billy Ray Cyrus and Dedee Pfeiffer, will be at Blockbuster after May 8. "Moving Targets," with former Batman sidekick Burt Ward, will be released at Blockbuster in the next 2 months. "Diamond Run" is on MTI home video. "Peril," with Morgan Fairchild, will be released May 23 on MTI home video.