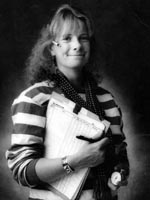 How to Be a Script Supervisor

A script supervisor (SS – "continuity clerk" in Europe) represents the editor on the set, organizing and logging a video or film in what becomes the editor’s bible, to ensure that he or she can access and identify every line and bit of film. Says Liz, "Anyone can take notes and logs, but it takes a lot of training to comprehend and accurately present the ins and outs of filmmaking." An SS also makes sure certain rules are known (if not adhered to).

One of these is "the 180° line," which maintains screen direction (see glossary). According to Liz, a Western without the 180° line would consist of, "The Cowboys and the Indians going in opposite directions," which wouldn’t exactly put an audience on the edge of its seat.

The 180° line also applies to conversations. For example, as one shoots tighter angles, one may lose track of who should be looking at whom. The end result might be a scene where people aren’t relating to each other, but are instead looking off at a third party. Imagine the resulting chaos and deadly vitriol of say, an episode of "Days of Our Lives" with the withering glances directed at THE WRONG PEOPLE. The 180° line ensures that both eyeline (not eyeliner — that’s Joe Rossi’s problem) and sanity are maintained.

Liz started her film career in the 70’s as a production manager, paying her dues, like most of her contemporaries, by working on small, low-budget features. Trained by her peers in New York, she thrived during the flush 80’s when crew people were in demand.

She recommends starting as a production assistant (PA) to learn how to handle yourself on the set. Generally, any crew is high pressure and stressful. If you can remain calm in the face of the storm, script supervisor could be the position for you. The shy need not apply but the focused and organized should, since you’ll be dealing with reams of information.

Perhaps the most important task the SS performs is maintaining continuity, similar to a makeup artist’s duties. Instead of checking hairdos (was it an updo or a downdo?), you’ll need to note details like whether an actor was wearing glasses when he stood up in his dialogue, and be, as Liz puts it, "incredibly diplomatic" when dealing with often delusional actors. Happily, the SS is ultimately the one responsible and has final say.

An SS must also log why the camera was rolling and what roll of film the cameraperson is on, which is then integrated into the script. This is called "lining the script," and it’s done so the editor knows where a piece of film and a sound take is located. It includes noting the number given at the clapper mark (see glossary) and what piece of action and dialogue it covers. A real-life scenario: Liz shot a scene, revisiting it a week later. Her initial black and white Polaroids unfortunately didn’t indicate that the refrigerator color had changed from avocado (hey, it was the 70’s) to brown, compromising continuity. Perhaps "continuity clerk" is the more apt name for the position.

An SS might also look for continuity issues in the script, bringing them up to the director or producer. At that point, the writer is usually not on the set, as opposed to shooting a TV commercial. Often, copy changes are necessitated by the medium’s brevity. In this case, the SS is in charge of breaking it down and monitoring timing (30 or 60-seconds). If necessary, the SS works with the copywriter to trim the script accordingly.

Be warned: you may argue with the director over continuity. What may seem vital to you may matter less to a director, necessitating negotiations. A good or bad take is determined by the director, but if the stop or exposure is off, the cameraperson’s opinion overrides the director’s, because of their technical expertise. Or maybe it was a great take, but the SS alerts the editor in the log that the continuity was horrendous.

In exchange for accomplishing the above, one would charge a negotiable day rate, starting for free. A typical day may last 15 hours due to lining the script after hours. As mentioned earlier, you may want to work on low budget films initially, building up credits as you go. Since the best way to learn the craft is on the job, roll up your sleeves, grab your markers and head for a set.

Liz Argo (www.argoproductions.com) is a 30-year veteran of the film business.

Eyeline – Part of the 180° line rule, this is the relationship maintained between characters to preserve eye contact once edited: "Character A looks Right – Left. Character B looks LT-RT."

Clapper – No, it’s not how to turn your lights on. That black thing with white scribbles is used to align film and sound.

Lining the Script – Literally drawing a line through the action/dialogue in the script covered in a shot. Combined with logged script notes, gives the editor a blueprint to construct an edit from.

Synchhouse or Posthouse – Facility used to "attach" the sound taken to the film taken by alignment using the clapper’s sync point or the time code reference.