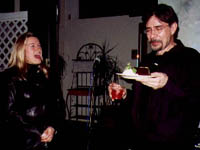 If the year 2000 was the pinnacle of dot-coms and reckless spending, then what’s in store for 2001? Well, assuming the 2001 Sundance Film Festival is an indicator, we can count on an industry that’s a bit more ‘cautious’ but also hopeful — especially in terms of the films that are spotlighted.

From over 3,000 submissions, the programming staff of the Sundance Institute selects about 100 features and 60 shorts for exhibition. Of course, it’s safe to assume that some quality films don’t make the cut (hence, the emergence of Slamdance, Slamdunk, Nodance, and the like). Yet, the festival achieves its mission in showcasing an impressive group of films — ranging in style from the perverted insanity of Bill Plympton’s animation ("Mutant Aliens") to the gravity of a documentary about a trans-gender individual dying of ovarian cancer ("Southern Comfort").

One might think that with over 20,000 people from around the world taking over the small town of Park City, Utah that New Englanders might get lost in the shuffle. In fact, it’s just the opposite. The Massachusetts Film Office hosted a gathering at the Riverhorse Café on Main Street attended by Bestor Cram director of "Unfinished Symphony"; the cast and crew of "Lift"; and other local (and some non-local) producers, directors and industry types. The group even sang to celebrate Kevin Fennessy’s (of Kevin Fennessy Casting) birthday. Maine and Vermont Film Offices’ party the night before (same location) brought out directors David Giancola, Jay Craven, among others.

"I genuinely think that I’ve detected a greater New England presence at the festival each year," said Local Sightings and Boston Underground Film Festival Founder David Kleiler. "This year, there were two films directly produced here and very well received. That certainly points to a major presence there."

It was certainly a banner year for New England. "Southern Comfort" directed and produced by Kate Davis (co-founder of the Cape Cod Woods Hole Film Festival) earned Sundance’s greatest honor — the Documentary Grand Jury Prize. In addition, a Special Jury Prize was awarded to Tom Wilkinson and Sissy Spacek for the Maine-filmed "In the Bedroom."

In the House of Docs, Cambridge, MA documentary filmmaker Errol Morris spoke on a panel and unveiled his Interrotron. Morris’ invention combines mirrors and cameras to enable the interviewee to look into the camera lens and see the interviewer (almost like a teleprompter with live images).

In his years of filmmaking interviews, Morris said he has tried to place his head as close to the lens as possible to create the illusion (in wider angles) that the subject is talking into the camera. His new device now achieves that goal without him even being in the same room.

"The idea that technology and intimacy are at odds with each other is wrong. The telephone is the perfect example. As I’ve said — being there is the next best thing to using the phone," he said. "Technology just creates a different kind of intimacy."

Morris was quick to praise working in New England. "I’m fortunate to have access to this incredible pool of talent," said Morris referring to film students from Boston-area colleges. "I shouldn’t even be making this public," he quipped.

All the buzz for New England films has paid off.

Kate Davis’ "Southern Comfort" will have its theatrical debut on February 21 at New York’s Film Forum and has been picked up by HBO. Miramax picked up its first New England production since "Next Stop Wonderland," acquiring "In the Bedroom" for a reported $1 million. And Errol Morris’ second season of "First Person" just announced a partnership with the Independent Film Channel who will be broadcasting the show.

No word yet on the status of "Lift" and "Unfinished Symphony" — but judging from the reaction of all who saw them, we should be getting word any day now.