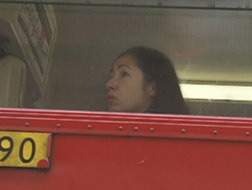 Share
NewEnglandFilm.com checks in with the VIDEO BALAGAN experimental film series to find out what surprises they have in store for their last shows of the fall season.

VIDEO BALAGAN returned this fall to the Coolidge Corner Theatre in Brookline for its third season, once again bringing an impressive showcase of experimental film and video created by both local and international filmmakers.

The work of experimental video and film is difficult to define. While the films and videos may often utilize a format seen in traditional narrative or documentary filmmaking, experimental artists have very personal agenda. Rather than conform to the mainstream vision seen in most Hollywood films, experimental film and video remain outside of the "industry" and exist solely as the artists’ vision, exposing not only an art form, but also the very essence of human existence.

It is the mission of Alla Kovgan and Jeff Silva, creators and curators of the VIDEO BALAGAN series, to provide experimental filmmakers with a venue to showcase their work, as well as give audiences the opportunity to experience the filmmakers’ visions.

"When we started Balagan, we were already part of a rather decentralized Boston film and art community," Kovgan says. To jumpstart the first series, filmmakers in Kovgan and Silva’s immediate circle of friends and professional contacts contributed to the showcase last fall. Following the favorable attention that first program received, news of Balagan spread to other filmmakers, who have since contributed their works. Thanks to VIDEO BALAGAN, the Boston film community has flourished. Kovgan and Silva have both brought an international flavor to their program through their extensive travels abroad; among the films screened are works from Yugoslavia, Portugal, Mexico, and, new to this season, Russia.

Incidentally, the name "Balagan" refers to a type of traveling theatre troupe that performed in Russia during the 18th, 19th, and early 20th centuries. Just as residents of the towns and villages welcomed the Balagan performers, Bostonians have given the showcased filmmakers a warm reception at the Coolidge. In fact, in Frommer’s travel guide for Boston, VIDEO BALAGAN is listed as one of the major reasons to go to the Coolidge.

"VIDEO BALAGAN has a chance to grow in popularity and quality with every show," says Coolidge Corner Theatre program director, Clinton McClung. "The Coolidge is proud to be a continued venue for VIDEO BALAGAN, and we vow to keep the program running as long as the creative energies continue to provide the community with innovative and astounding new works."

What is truly astounding is the fact that the Balagan series is produced with no funding for the curators or contributors; their payment is only the satisfaction of having their work viewed by the Coolidge filmgoers. Kovgan and Silva mention the philosophy of Jonas Mekas, director of the Anthology Film Archive: "Films are made by people, not money." For Balagan, one may say that programs are put together by people, not by money. This point is verified by Balagan’s prosperity, proving that Kovgan and Silva are tireless in their efforts to put together quality programming.

During its first two seasons, VIDEO BALAGAN was not theme-based, but rather showcased work from particular groups of filmmakers, with programs such as "Local Masters" (contributions from local college and university professors), "Fresh Perspectives" (student and teenage works), and "Local Animation." "But now that Balagan has established itself as a venue for experimental film and videos in Boston," Kovgan says, "we are finally able to focus more on the thematic shows. This has been our dream since day one."

The third season is a perfect depiction of that dream. Some of the themes showcased this season are "No Place Like Home," which allows the viewer to experience homes all over the world and the family stories behind those homes, and "Poetry In Motion," which presents works that are based on or inspired by literature.

"Director’s Cut" has a new home this year: it will be presented in the spacious 250-seat theatre at the Coolidge (the rest of the series is shown in the smaller screening room). "‘Director’s Cut’ is a big celebration for Balagan filmmakers, our dedicated audience, and ourselves," Kovgan says. Initially conceived as a "Local Masters’ Series," a forum for local film professors and lecturers, "Director’s Cut: Balagan" developed further into an outlet for local filmmakers to invite audiences to experience their personal visions. Formats for the program vary from 16mm, to Super 8, to digital video, and the running times range from two to 15 minutes.

Visual Surprise III, to be shown on December 13th, is the final event of this year’s Balagan series. True to its name, this last showcase is a surprise to even Kovgan and Silva. Visual Surprise usually provides a nice segue into the holidays for the fall series, and for the spring; this year, however, Kovgan and Silva have traded a festive theme for a post-September 11th reflection.

"We have not got many submissions yet, but we hope that filmmakers will simply bring pieces they made right to the show," Kovgan says. Hence, the surprise. The works shown at "Visual Surprise" do not have to be completed projects; work-in-progress and even raw footage is welcome for the showing. Even films and videos made prior to September 11th can be shown; the point of "Visual Surprise" is, as Kovgan and Silva explain it, to show works that "pertain or resonate some way with the current state of being."

"We hope that Visual Surprise will be a place to ruminate about the events [of September 11th] and to share our thoughts and worries with each other."