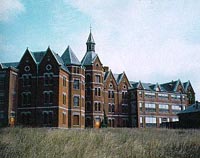 Like revenge, horror is a dish better served cold. In Brad Anderson’s latest film, "Session 9," there is nary a scream queen or slasher in site. Instead, the film resonates with the nuance of showing less instead of more. "Session 9" is a psychological horror film that is more chilling than anything that could be portrayed with buckets of blood.

Similar to other classic horror films such as "The Shining" and "The Innocents," the location of "Session 9" played an essential part in the film. Shot at the 500-acre Danvers State Hospital in Massachusetts, this fascinating location has an extensive historic value. It was used as part of the Massachusetts Film Office’s Fee-Free Location Program, in which state-owned locations are provided to qualified filmmakers at no cost and may be used for office and set space. The most predominant building used in "Session 9" was the Kirkbride Complex. Built between 1874 and 1878, the rust-colored twisting struts and expansive underground tunnel system of the building recalls a perverse vision of the intricate architecture of the Victorian Gothic Revival architectural era. The Kirkbride Complex is covered with both deep, forest-green ivy and long iron bars, seeming vulnerable and menacing simultaneously.

The floors of the Kirkbride Complex are littered with remnants of its chilling past. It was in such disarray that it needed extensive cleaning before filming could commence. Rumors run abound about what did and did not occur at this location. It has been alleged that some of the first lobotomies ever performed occurred there. But then again, it has been claimed that there was never a lobotomy performed there. The site is an array of contradictions.

An intricate tunnel system weaves underneath the towering building of the Kirkbride Complex. The building once housed over 2,300 inmates, although it was built for a maximum capacity of 650 inmates. Standing on the dirt path, one shutters to think of the horrors that litter the past of this building. Files are scattered about the floor containing statistical facts about the most intimate secrets of former patients’ lives and yet, there is a stillness about the Danvers State Hospital. An eerie disquietude encompasses one as they view the hospital, as if something should happen there, because so much once did. For example, the building’s site is known for its involvement with the Salem witch trials. For those unfamiliar with geographical details, Salem was not the site of these trials. Instead, they occurred in Salem Village, otherwise known as present-day Danvers. The mother of one of the young accused lived on what is now Danvers State Hospital grounds. The most notorious of the judges, Jonathan Hawthorne, lived in a house located exactly where the Kirkbride Complex was built.

In 1984 the Danvers State Hospital was listed on the National Register of Historic Places and as a possible archeological site. With all of its ambiance and history this setting was ideal for the setting of "Session 9."

"Session 9" is the tale of five men who are hired for an asbestos removal job at the Danvers Lunatic Asylum. In the course of one week, their lives are drastically changed as they explore both the eerie history of the building they are working on and the inner demons of their own pasts. The impressive cast is composed of David Caruso, Stephen Gevedon, Josh Lucas, Peter Mullan, and Brendan Sexton III. Caruso has previously starred in the film "Jade" and on the television series "Michael Hayes" and "NYPD Blue." Gevedon, besides an assortment of impressive acting credentials, including such popular television shows as "Oz" and "NYPD Blue," also was screenwriter of the film, along with director Brad Anderson. Josh Lucas is most memorably known for his performance as Craig McDermott in Mary Harron’s "American Psycho." The Scottish born Peter Mullan, has worked on such films as "Trainspotting" and "Fairytale, A True Story." Brendan Sexton III has been in numerous independent films, including "Boys Don’t Cry," "Pecker," "Hurricane Streets," and "Welcome To the Dollhouse," in which Sexton was nominated for an Independent Spirit Award for Best Debut Performance.

"Session 9" is Brad Anderson’s fourth feature film. All of Anderson’s previous features, "The Darrien Gap," "Next Stop Wonderland," and "Happy Accidents," have been selections at the Sundance Film Festival. His first feature won him the Best Director Award at the Deauville Film Festival. His next film, "Next Stop Wonderland," was a critical and financial success winning him the Grand Jury Prize and Audience Award at the Sundance Film Festival and a profitable distribution deal with Miramax. Anderson’s latest released film, "Happy Accidents," is slated for theaters in February or March.

"Session 9" was produced by Boston-based Scout Productions. Formed in 1994, by Dorothy Aufiero, David Collins, and Michael Williams, Scout Productions has a reputation for innovative and provocative filmmaking. Their past projects include: Errol Morris’ award-winning documentary, "Mr. Death: The Rise And Fall Of Fred A. Leuchter, Jr."; Adam Bernstein’s "Six Ways To Sunday;" and film festival favorite, "Home Before Dark." They are currently in production with the second season of Errol Morris’ genre bending television series, "First Person," and the dark comedy "Dead Dog," starring Jesus Jeremy Sisto.

As impressive as the credentials are of the people involved with this film, one is continually drawn to its location. In Michael Ramseur’s article on the Danvers State Hospital he describes its hypnotic effect, "Gothic arches were etched repeatedly, and in retrospect, it seems compulsively, into the warp and woof of the building’s design. I could imagine a sound, a bizarre musical tone, emanating form the strange nineteenth-century asylum. It created a sensation of displaced time. I was witness to an atavistic form existing within my own era, I was being presented with an ancient mystery."