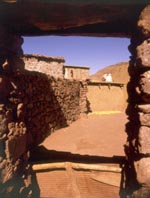 Share
Boston Filmmaker and Assistant Curator of the Harvard Film Archive, Steffen Pierce talks about the shooting on location in Morocco for his film 'Marrakech Inshallah.'

Steffen Pierce is a producer, writer-director, cinematographer and editor whose most recent film, "Marrakech Inshallah," is the second of two films he and his brother, Christian Pierce, have made on location in Morocco. He currently works as the Assistant Curator at the Harvard Film Archive where he manages a growing collection of African cinema.  Pierce took some time to talk with NewEnglandFilm.com after his return from the 2000 Independent Feature Project Market where his film was featured.

PN: What inspired you to make "Marrakech Inshallah"?

Pierce: When we made "The Bride Market of Imilchil" (1987), we spent time in the remote mountain village of Imilchil interviewing men and women, husbands and wives, about their tribal traditions, and we became completely captivated by the people, the place, the landscape. The more people we interviewed, the more it became apparent to us that, even though we had read a great deal about the Berber tribes, their traditions and practices, there was no way that we could get into the film their mindset, their point of view. Even though they were being quite frank with us, we were asking them many intimate questions, there was no way in the form of nonfiction–given the restraints and the inhibitions within that society–to get the kind of closeness to our subjects so that we could get a really honest portrayal of someone’s life. As you saw in the film what we ended up with was a portrayal of the market itself. If there is any one primary character in this nonfiction piece, it’s the market, the event itself; and then around that there are these interviews clustered that give you details about what’s happening in the marketplace. But what frustrated us was that there was no one individual that emerged as a complete character.

Based on that experience, we decided we wanted to make a fiction film in Morocco that brought to life one or two local characters from the same area — that is what led us to make this film. "Marrakech" means Marrakech, the city of Marrakech, which is north of the Atlas Mountains. "Inshallah" means "God Willing." It’s a traditional saying that you hear again and again in Arabic conversations. Both films are in Arabic and Berber. We did our direction in French because most Moroccans speak French.  Then, our French direction was translated into Arabic.

PN: You mentioned that this expression, Inshallah, is a traditional saying. Tell me more about how it’s used.

Pierce: Well, it’s really an expression of this fundamental idea within Islam of acceptance. So you can say, "I’ll see you tomorrow," and the response will be "Inshallah," or "God willing." The meaning of that is "Nothing depends on us; everything depends on God." And that was the other fascinating thing about being in this culture (and I had been to Morocco ten times before I made these films) is that it really is the direct opposite in a sense of our lives here which are very individualistic, with everything under your control and everything in your power to change. All of the psychological responsibilities that come with that which, I think, affect the way we treat each other and live our lives. None of that really exists in Morocco or its rural areas (of course it’s changing) because there is a genuine belief that everything depends not only on your own willpower and efforts, but also on the will of God.

Another thing that affected the making of this film, "Marrakech Inshallah," apart from making "The Bride Market of Imilchil," were the writings of Paul Bowles and two other writers, Mohammed Choukri and Mohammed Marbet. Their writing is very much about not just the poverty of Moroccan life but also the issues of fate. Many of the stories that Paul Bowles wrote are very much about that, not just the literary ideas but the actual ideas that peoples’ lives are already fated through tragedy or success and that you’re blessed or fated to live a tragic life.

PN: What is the story that "Marrakech Inshallah" tells?

Pierce: The film follows the trail of these two brothers as they travel across the desert, hitchhiking across this amazing landscape. When Aziz, the younger brother, runs away to Marrakech to find his lost brother, [Hammadi] he realizes that it’s a huge city; he’s not going to be able to find his brother as he might in his own village, at the local tea shop or bread store. He’s lost in this huge city trying to find his way. The viewer becomes drawn into the poverty, the magic, and the struggles of their everyday lives, as these lives are torn between the traditions of the past and encroaching Western consumer values.

One of the points of making this film is to make a western audience see through the eyes of these young men living on the streets of Marrakech. Instead of seeing poverty as this unfortunate event that happens to other people in the third world, part of the effort of this film is to try to put the viewer in their shoes. So that after following these two boys for 90 minutes, you actually see the western, nonfiction filmmaker who interviews them at the end of the film through their eyes.

PN: Do you have any plans for your next film?

Pierce: At once point I was interested in making a film about neo-Nazis. I don’t know if I would want to do that now. I’m a huge lover of the work of Cassavetes and I feel as I grow older, I’m intrigued by taking on the challenge, and as a father of a ten-year-old daughter, of putting her in a film–not because she’s my daughter–but because I’m very intrigued by the dynamics of the family. And this is a real challenge for me because I’m so visual, so attracted to landscapes. An enormous challenge would be, for me, to move away from landscape and place and make a film in an American setting in English, on the dynamics of the family. That is one thing I fully admire so much about John Cassavetes; that as an American male, he was able to enter into that world and deal with the emotional dynamics, the truths, and the lives in that drama.

PN: Why are you a filmmaker?

Pierce: Because it’s a disease and I’ve got the disease. (Laughs) I’m not sure what the cure is. You enter into a project and because this is not work for hire, these are projects that my brother and I are conceiving and making a reality: they become an adventure and a love affair. It’s entirely up to you to meet the challenges that come up. It’s a huge amount of fun, full of risk and an enormous amount of self-discovery.