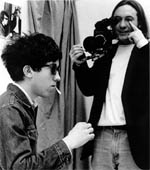 A clown serenading. A woman scantily clad in (yes, it’s true) postcards. These are just some of the signs to remind you where you are — at the Independent Feature Project Market (IFP) where certain filmmakers will try just about anything to boost the attendance of their screening.

The Market, for those who haven’t been, is an annual week-long event of screenings for film buyers, film festival organizers and others. Unlike a festival, the films are there with the clear mission of acquiring finishing funds, screening and broadcast outlets, or distribution. The 2000 Market program included 293 documentaries, shorts, features and works-in-progress, as well as approximately 100 script projects.

But that’s not all that’s changed. Apparently, after some supposed run-ins with the NYPD, the Market has tried to ‘tone down’ a bit this year.

According to rumors, last year some desperate filmmaker hired a military tank to drive down West Houston to promote his film. Whether or not it worked as a publicity stunt was irrelevant to the NYPD who were not too pleased and told Market organizers to crack down on such crazy antics.

Boston director Steffen Pierce whose film "Marrakech Inshallah!" was at the 2000 Market said that the IFP Market guidelines specifically state that desperate attention-getting acts are not going to help your film. Yet during an IFP panel, one of the film festival reps said they’d give a prize to the filmmaker who created the best publicity stunt. Pierce opted to ‘low-key’ it with a temporary Moroccan tattoo with the name of his film to use as a conversation piece.

No matter what the gimmick, some films find success at the Market and others don’t. Pierce is confident that his lyrical film about a Moroccan boy who runs away to Marrakech to find a lost brother will be one of the lucky ones, since his earlier film "The Bride Market of Imil Chil" was sold to Channel 13 at the 1987 Market.

"The Market was a totally different thing then," said Pierce. "It was less mad, and there were less films." Pierce noted that his film still stands out from the crowd since only six films included in the Market were shot in Africa. "Marrakech Inshallah!" screened on Saturday and attracted a large crowd which included reps from 7th Arts Releasing and Sony Pictures. "The IFP should be commended for giving you a list of all those who attended the screening, as well as those who viewed it in the video library," said Pierce. This enables filmmakers to follow up with potentially interested buyers after the Market.

"The thing is not to be obsessed with promoting your film. Go to the screenings and meet people," said Boston producer Myna Joseph. Joseph attended the IFP Market this year to help promote "Adrift" which she worked on as an Associate Producer. The film, directed by Tom Curran and co-produced with Tracy Heather Strain, is a personal story about an Irish-American family with ‘Kennedy envy’ who feels trapped by their father’s drive of success.

The producers had a couple of goals in taking the film to the IFP Market. "One was to get [the film] together. Secondly, we wanted to get people to see our project and create a buzz. Primarily, we wanted to meet people who would be helpful in the next stage of the project," said Joseph.

As far as achieving those goals, the "Adrift" team seems to have done quite well. The film screened in one of the smaller theaters to a full crowd and definitely built-up a good buzz during the Market.

Another New Englander, Producer Betsy Carson took her film "(i’m living) a charmed life" to the IFP Market "to bring awareness to Bugeye Films and its projects." The movie (think of a lesbian, low-budget "You’ve Got Mail") was created by Bugeye Films, a subsidiary of Betsy’s company All Art Media Inc. which produces commercial and corporate projects. "I don’t care if we make millions of dollars. As long as we can make our movies and support ourselves doing it," said Carson.

The screening of "(i’m living) a charmed life" wasn’t packed, but as IFP Market Director Milton Tabbot always reminds filmmakers: "It’s not how many people you have in the audience but that you have the right people."

Carson also feels that the best learning experience was the opportunity to see other films. "I’ve learned a lot seeing other people’s movies — there’s some good and some crappy stuff," said Carson. "It gives me determination to go home and plan how to get us out there."

Overall, there was a nice representation at the Market from New England filmmakers. Features included: "Dischord," "Loop Dreams," "The Pork Chop Lounge," "Follow Me Outside," "Ice Grill," and "Pitstop." A variety of works-in-progress included: "Harwood," filmed on location in Connecticut; "Live Free or Die" from New Hampshire; as well as "My Lucky Porn Star," "King Midas," "(I’m living) a charmed life," "Marrakech Inshallah," and "Midnight Rain." From the shorts category, it ranged from the wacky "Crash Pad and the One Arm Bandit," to the dramatic "Fruitlands 1843," to the interesting, but abstruse coming-of-age tale "Sticky." Also included was the philosophical "A Shout from the Streets" inspired by James Joyce’s "Ulysses."  A complete list of all the films from New England with contact information is available on the site.

Probably the most unusual local production at the Market, and consequently the most difficult to categorize was "Legend of the Corn Bomb Space." Partially filmed in New Hampshire, this creation of Jim Swaffield combines film, virtual space, distributed web content, and original music. In lay terms, it’s part game, part movie, and part music. The goal of the project is to enable viewers to appreciate it on many levels — as a linear story (for the ‘couch potatoes’ as Jim says) as well as an interactive game where spaces that are shown in the movie can be explored virtually by the viewer. Of course, these features require some interactive format to support it such as DVD or the Web.

There were also several local award-winners at the Market. Woods Hole native and co-founder of the Woods Hole Film Festival Kate Davis received the first HeavyLight Post-Production Grant at the IFP Market for her film "Southern Comfort," the true-life story a spirited cowboy and a city girl, both of whom are transsexuals.

Other local notables included two of the short films featured in the IFC 2000 Student Showcase — "Atlas Gets a Drink" from Rhode Island School of Design and "No Vladimir" from Harvard University. The local film "Look Back, Don’t Look Back" a wonderful documentary about two student filmmakers who are on a quest to meet Bob Dylan would have also been included in the student showcase, but its broadcast rights weren’t cleared in time. Since the showcase includes airing on the Independent Film Channel, those must be cleared prior to consideration.

Regardless of the results after the Market, all the New England producers whose films were included have reason to be proud. The Market accepts only about 60% of the submissions, according to Tabbot.

"It comes down to quality and marketability," said Tabbot. "We know who the buyers are and we try to determine if there’s someone at the Market who will be interested in a particular project."

More information about the IFP and the IFP Market is available at their web site, http://www.ifp.org.   Two of the films featured at the IFP Market: "Pitstop" and "Look Back, Don’t Look Back" are available for purchase at BuyIndies.com.  Also see a complete list of all New England projects at the market.

More information about the IFP and the IFP Market is available at their web site, http://www.ifp.org.   Two of the films featured at the IFP Market: 'Pitstop' and 'Look Back, Don't Look Back' are available for purchase at BuyIndies.com.  Also see a complete list of all New England projects at the market.