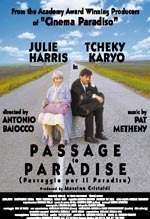 Creating Her Own Passage to Paradise

Distributing independent films isn’t what Laura Bernieri set out to do. Neither was producing, though you would never know it watching her juggle our late-afternoon interview with signing a stack of invitations, supervising a mass mailing and getting the last of her daily phone calls in before driving home. Bernieri commutes to her Brighton Avenue office in Boston from her home in Andover, a drive that offers a welcome respite from her work as a producer, now make that distributor, of independent films.

Professionally she has met with success in virtually every endeavor she has undertaken since returning to the Boston film community from LA 1986. In 1986 Bernieri founded the Harvard Square Screenwriters group, then went on to work as a consultant for Robbins Entertainment, where she was associate producer of "Squeeze," an independent film about three young boys growing up on the streets, which Bernieri and her associates ultimately sold to Miramax. More recently she co-produced the 1998 indie hit, "Next Stop Wonderland," which was again sold to Miramax. "I didn’t want to produce," she recalls with a smile. Maybe not, but New England’s independent film community is sure glad she changed her mind.

Today, Bernieri is leveraging the success she has found during her 30 years of being involved with film, and is finding new roles and new challenges at Brighton Avenue, a production company she owns and operates with business partner, Ted Kurland, who manages an all-star lineup of established and rising stars in the jazz world.

Kurland and Bernieri launched Brighton Avenue in February of 1999 with the mission of discovering and nurturing new talent. "The reason why I am in this business," says Bernieri, "is to get other voices into the mix. Our company is meant to be a studio for Boston, the idea being that we want to make films."

From Producer to Paradise

For Bernieri, the producer, to jump from Robbins Entertainment to her own production company was a small step, but to become Bernieri, the distributor, was a leap of faith, both in her and in the instincts of her partner, Kurland. While attending the 1999 Sundance Film Festival, Kurland, presented her with a challenge by handing her a videotape of the film "Passage to Paradise" by the makers of "Cinema Paradisio." He asked her if they could generate enough enthusiasm for the film to launch a successful theatrical release in the US.

Bernieri was skeptical. The film had been released in Italy and France, after which the filmmakers made an expedient sale to HBO. For a film to go to the small screen before going to the big screen, Bernieri knew, was "the kiss of death." After seeing it herself on the small screen, Bernieri had doubts. "I wasn’t blown away," she describes. But then she saw it on the big screen.

"I was so incredibly enchanted," says Bernieri, "seeing the film laid out on the canvas of the big screen with the music of Pat Metheny (Metheny is one of Kurland’s clients) and the beautiful Tuscan landscape, I grew very attached to (the actors) Julie (Harris) and Tcheky (Karyo). Bernieri’s attachment to the film is more than just business. The film touches on issues, such as aging parents and the science and politics of geriatrics, that are important to Bernieri. "This film creates a context where people can talk about social issues." She is specifically targeting the elderly population in her marketing campaign, an audience that she feels is largely ignored by the film industry.

Bernieri says it took about six months to warm up to her new role as an independent film distributor. "On a conceptual level it was scary to me when he [Ted] first brought it up. But as I started thinking about it and as I started enjoying some success in my whole campaign, and as I look back on what I did with ‘Squeeze’ and ‘Next Stop Wonderland,’ I realize that I have the confidence now to give it a shot."

Bernieri now finds herself talking demographics, learning the science and politics of her target audiences, and best of all building one-on-one relationships with theater owners. Armed with a large, black notebook stuffed with demographics and 18 months of experience in theater and distribution politics, Bernieri recently met with a representative of National Amusements about "Passage to Paradise" and was surprised how well her message was received.

"They were blown away," recalls Bernieri. "People become jaded in the film industry, so if you have a way to market a film outside the box, which is what we do in the independent film community, your enthusiasm becomes contagious. The key to building successful relationships with theater owners, says Bernieri, is proving that this film is worthy to show at theaters, that there is an audience and that you know how to get to that audience.

If the past is any indication as to whether Bernieri’s new endeavors will be successful, there really is no doubt. But Laura Bernieri isn’t resting on her laurels, admitting, "If I’m successful with this film it will be like pulling a rabbit out of the hat."

With their work on "Passage to Paradise" Ted Kurland and Laura Bernieri seek not only to advance their own careers, but also to bring the New England film community one step closer to the limelight. As they succeed, so too does the independent film community.

"I think it throws a really important spotlight on the Boston film community and how smart we are, and how devoted we are to ideas, not just making money. I feel it’s another thing that gets Brighton Avenue on the map, but it also gets Boston on the map." Bernieri recognizes the difference between the New England film community and those of New York and LA, and points to those differences as being the key to its success.

"There’s a feeling here where there’s power in our numbers, whereas in New York and LA there’s a sense of operating in scarcity. There are only so many spots for so many people, so you tend to be exclusive, but we are inclusive, we all root for each other. People have been so wonderful to me about the success of ‘Wonderland,’ for example, and I’m really delighted to go to Sundance and promote other people’s films from New England. I think there is, again, the feeling that when one succeeds, all succeed."