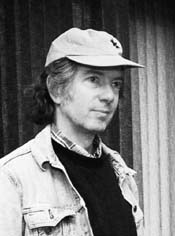 Filmmaking and farming may not seem to have anything in common, but filmmaker Jay Craven unites them with a farming metaphor used to describe his work.

"A New England farmer milks the cows, looks after the livestock, tends to sugar maples, harvests crops, and does it all," he remarks.

Craven, another kind of New England worker, takes on a variety of activities, including writing and directing feature films, teaching classes on film culture at Marlboro College, and running both a production company, Kingdom County Productions, and a youth filmmakers institute. Like the New England farmer, Craven’s work is intimately tied to the land; his films have all taken place in Kingdom County, Vermont, a fictional milieu created by the novelist Howard Frank Mosher, and were shot in northern Vermont.

Craven’s followed his first dramatic work, "High Water" (1989), with feature films "Where the Rivers Flow North" (1994) and "A Stranger in the Kingdom" (1998). Both were successful at festivals, including Sundance, and have done well in the video market. Kingdom County Productions, a non-profit production company founded in 1991 by Craven and Bess O’Brien, produced all three.

In 1997 Kingdom County Productions created Fledgling Films, aimed at educating teenagers about screenwriting and filmmaking. In 1998 Craven directed "In Jest," assembling the collaborative efforts of 40 teenagers who worked together prior to and during Fledgling Film’s Summer Institute. At last year’s Institute, kids wrote, directed, and acted in 10 short films, which won awards at the Vermont Film Festival and were recently screened at a benefit at the Lake Placid Film Forum. Craven looks forward to this year’s Summer Institute, where teens will complete 6 or more short films.

A strong sense of place is central to Craven’s ideas about the cultural value of filmmaking.  "Many of this nation’s great stories have originated with a sense of place," he says, referring to novelists such as Steinbeck, Faulkner, or Welty, whose regional novels evoked universal themes and responses. Craven focuses on a New England location; he tries to render a time and place from a cultural point of view, portraying stories and characters drawn from a specific region. Excellent reception outside New England shows his films have a universal appeal – but Craven believes local response is a vital part of his work. Craven tours his completed films around New England towns.

"I can take my films into any small town and have a dialogue with the audience about it, about how it connects culturally to their town," he says. At a time when so much homogenization is taking place in American society, Craven is gratified to see his films affirm that New England is a unique cultural location.

Calling himself ‘an activist by nature,’ Craven has long been enthusiastic about making cultural events happen. He describes his work as ‘cultural filmmaking,’ distinct from commercial filmmaking.

"Developing a deep and lasting audience is a key issue for independent filmmaking," he says. In many ways, this means cultural education: audiences need to learn to become sensitive to film culture, which will nourish a renewed interest in film beyond Hollywood’s blockbuster of the month.

"We need to see development of local arts programs," he suggests, including repertory theaters and programs for youth and local distribution. He hopes to see expanded support for regional films by public television, particularly as the NEA’s funds dwindle. He recommends the local screening and distribution practiced by King County Productions, in contrast to studio efforts (even by independent subsidiaries) to build audience through prohibitively expensive ad campaigns.

As the filmmaking industry in the US becomes increasingly commercial, urban, and youth oriented, challenges grow for independent films that fall outside the Hollywood demographic. Yet the process of building a deep and lasting audience will keep independent filmmaking alive, declares Craven.

Craven expands his educational focus at Marlboro College, where he instills students with a sense of film culture in classes on film history and genres such as film noir, Third World cinema, and Asian cinema. He teaches screenwriting, encouraging students to develop their own unique voices while developing strong scripts and good characterization. Teaching allows Craven to continue to develop his own thoughts about the role of education in the development of the public’s sense of film culture.

"Young people get so much media exposure," he says, "but they have no opportunity to engage it in dialogue." He hopes his classes help guide students towards broader understanding of media and appreciate the culture around them.

Craven’s future projects include a third film based on Mosher’s novels, called "Disappearances," a whiskey-running adventure starring Kris Kristofferson. This project, honored with the NEA’s only grant for a narrative film this year, will begin shooting in the fall or next spring. Craven is excited to work on the story that first drew him to Mosher’s work, but he says his first foray into special effects will make the shoot especially challenging.

Craven has also developed a screenplay for a 1970s coming-of-age story set in the aftermath of the Kent State shootings, called "The Year that Trembled." He plans to film in Ohio this year or the next. He also recently acquired the rights to Boston intellectual Howard Zinn’s play "Emma," about the life of radical feminist Emma Goldman.

These exciting projects, plus ongoing work with the teens of Fledgling Films, fundraising for Kingdom County Productions, teaching, and touring New England with his completed films makes a busy roster for Craven.

"But I wouldn’t want to do anything else!" he says.