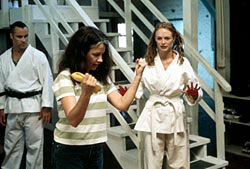 The Maine International Film Festival is a 10-day celebration featuring American independent and international film. There will be visiting filmmakers, and other special events. The festival runs July 7-16, 2000. For additional information call 207-861-8138, email info@miff.org, or visit their Web site www.miff.org.

In Addition, The Public Screening and Awards Presentation of the 23rd Annual Maine Student Film and Video Festival will be held Saturday, July 8, 2000 in conjunction with the Maine International Film Festival. MSFVF is open to Maine residents 19 years of age and younger. For more details, e-mail hueyfilm@nlis.net, or visit http://www.agate.net/~ile/mama.

The Renaissance City Film Festival will be held July 28, 2000 – August 4, 2000 in Providence, Rhode Island. This festival celebrates the filmmaking process by showing an wide variety of films to a diverse audience. For more information call 401-421-7740 x528, email Jdharv@hotmail.com, or visit www.rcff.com.

Samantha Head will be taking the helm as Editor of NewEnglandFilm.com in July. Samantha is a writer and filmmaker who has worked on major PBS productions including "The Mississippi: River of Song" and "Eleanor Roosevelt." Over the past several years, she has worked for the Filmmakers Collaborative, the Rhode Island International Film Festival and as an independent producer. Samantha Head is a graduate of the Rhode Island School of Design. She can be reached at samantha@newenglandfilm.com.

Point Of View (P.O.V.) began its 13th season and will air on Tuesdays at 10 PM ET (check your local PBS listings). For more information about these programs or the complete P.O.V. program schedule, go to P.O.V. Interactive at www.pbs.org/pov.
Also, P.O.V.’s 2001 call for entries deadline is July 31. They are Looking for nonfiction works by independent film or video makers, released within the past four years, complete or nearly complete, short pieces are encouraged. Works may not have been previously submitted to P.O.V. For further information and to get a submission form, please contact www.pbs.org/pov or call 212-989-8121.

London-based Jane Balfour Films (JBF), one of the most respected documentary distribution companies, has gone into liquidation. Jane Balfour Films has contributed enormously to the development of an international market for documentaries over the last 20 years. Chief Executive Jane Balfour and Managing Director Mary Barlow have also become well known on the conference, market and festival circuit, frequently appearing on panels and promoting the cause of independent documentary production.

The 9th Annual Woods Hole Film Festival offers workshops in conjunction with Falmouth Community Television (FCTV13) and Boston Film and Video Foundation (BF/VF) All workshops will be held at FCTV-13. Registration for these courses is open through July 14th through Falmouth Community Television. For more details call 508-457-0800, or visit www.fctv.org

KidsEye™ Filmmaking Camp Debuts in Rhode Island as part of the upcoming BROOKS Pharmacy Providence/ Rhode Island International Film Festival. Campers will attend hands-on workshops taught by movie professionals on screenwriting, acting, directing, makeup, costuming, special effects and how to use a camcorder. The KidsEye™ camp will be held daily from 9:00 am to 12 noon on Wednesday, August 9 through Saturday August 12. The cost of the program is $295 per child. To register call 401-861-4445, or visit http://www.film-festival.org.

Paying homage to a tradition of movies about and shot on Boston’s North Shore, New Harbor Media Institute, a partnership between Endicott College and TV production company Counterproductions, Inc., announces its summer Fusion Film Workshop to take place July 17 through 21. Further course and enrollment information is available on the Web at www.newharbormedia.com, or by calling 978/921-7177.