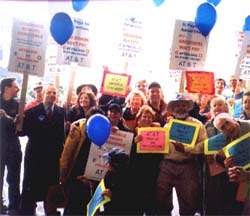 An Open Letter to the New England Creative Community

Share
For the past 2 months, SAG and AFTRA have been on strike over the terms for new commercial contracts. Read their side of the story and post feedback.

Since May 1, 2000 SAG and AFTRA have been on strike over the terms for new commercial contracts. We’re writing to you because we are aware that our present work stoppage affects not only actors, but everyone in the creative community involved in producing commercial in New England. We want to take this opportunity to share a few facts with you that we hope will explain why we had no choice but to take this course of action.

SAG and AFTRA reluctantly called the strike when national negotiations for new commercial contracts broke down with the sides miles apart. This strike only covers TV and radio commercial work. No other work is affected. Corporate/industrial videos, PBS narrations, TV programs, films, and other non-commercial productions go on as usual.

A detailed explanation of the issues can be found on the Union websites at www.sag.org and www.aftra.com. Here though, are the four major sticking points.

The members of SAG and AFTRA are working people, working actors, and for us a prolonged strike will be difficult to endure. For many of us, our work under our Union contracts represents a significant portion of our income. For some of us, it is our sole source. Of our freelance SAG and AFTRA members, the actors you work with in commercial productions, only 17% qualify for even the most basic health insurance.

Boston has always been, and we hope always will be, a great town in which to work. We have all developed valuable professional and personal relationships with the wonderfully creative agency people we’ve worked with over the years. Our differences are not with them. Our disputes are focused at the corporate level. To ensure continued good will and creative excellence in our community we encourage you, and your colleagues, to sign Interim Agreements.

The decision to strike is never easy, but we strongly believe our very future as commercial performers is at stake. We ask for your support and urge you to honor our strike. We will withstand the insulting assertion that the advertisers can conduct business as usual without us and we will stand united in order to acquire a fair and equitable contract. A contract that will guarantee a level of professional compensation that will benefit everyone in our creative community. We want no more, but can settle for no less.