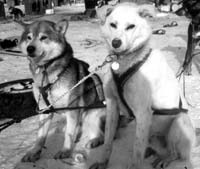 Share
The New Haven Film Fest gathers once again this month to honor independent films from near and far.

Film Fest New Haven celebrates its fifth anniversary from April 7-9 in Connecticut. As in previous years, the main goal of the Festival is to "expose film fans from all over the region to new and exciting talents in the independent film and video fields."

Founded in 1995, Film Fest has been a grassroots festival that has grown in both popularity and importance. While Film Fest New Haven still relies primarily on the individuals who come to support the festival through the purchase of various packages and passes (see below), the dedication of the all-volunteer staff has attracted such big-name sponsors as Bell Atlantic Mobil, Kodak, Yale University and the "New Haven Advocate."

Three venues in and around Yale University and downtown New Haven — York Square Cinema, Whitney Humanities Center and the Little Theatre — will be screening the festival’s entries over the three-day period.

On Friday night the documentary "Shadow Boxers" premieres. In addition, the collection of short films, "Keep It Short #1," including "Night Deposit" (also shown in this year’s New England Film and Video Festival), "Sploosh" and "Fighting Eddie," screens. Both of these will be held at the York Square Cinema. For those who miss "Shadow Boxers" on opening night, it will be shown Saturday at 11:00 a.m. at the Whitney Humanities Center.

Saturday the festival kicks into high gear with the "Passion For…" series at the Little Theatre. In this series, which combines feature and short films, seven themes will be covered; among them, work, community and passion. Included in this series is "Death of a Dog," a drama shot on 16mm by Paul Hipp and executive produced by Abel Ferrara ("King Of New York"). Edie Falco, the award-winning actress of "The Sopranos," stars. Also in the series: the award-winning drama Captive Audience, which chronicles an overnight disc jockey’s unique evening with the disturbed, gun-toting intruder who holds him hostage.

At the Whitney Humanities Center, feature films such as "Rendezvous In Samarkand" and the great documentary "Paul Robeson: Here I Stand" will be among the day’s highlights. At York Square, the day will begin with the short film collections "Family Shorts" and "Telling Stories," along with the feature films "First of May," "The Auteur Theory" and "Amic/Amat" ("Beloved/Friend"). There will also be a filmmaker forum from 3:00 to 5:00 p.m. at 70 Audubon Street, where you can join the filmmakers of tomorrow as they discuss the past, present and future of the medium.

On the festival’s final day, Sunday, you can sample even more short and feature films, among them "Orson Welles Sells His Soul to the Devil," which tells the tale of the trials and tribulations that occurred on the stage in 1937 when Welles and John Housman were at odds on a production of "Doctor Faustus." "Orson Welles" screens at the Little Theatre as part of the "Script to Screen/Dialogues" collection beginning at 11:00 a.m. Also at the Little will be a screenplay reading of "The Bagel King" at 1:00 p.m.

Later that day, the Whitney Humanities Center offers up the provocative documentary on the respected historian, scholar and Pan-African activist John Henrik Clarke, "John Henrik Clarke: A Great and Mighty Walk." A fascinating look into Clarke’s ideas presented with rare archival footage and photographs, the film is directed by St. Clair Bourne and is executive produced and narrated by Wesley Snipes.

For a walk on the cold side, head back to the York Square Cinema, where you can catch the Alaskan adventures "Kusah Hakwaan" and "Mud Season." Each of these films is accompanied with a short film: "Kusah" with "Pocket Watch," and "Mud Season" with "A River in India."

For those wishing to attend the festival in style, there will be an exclusive weekend package for $200 per person, including hotel accommodations, the Filmbuff weekend pass, private hospitality suite, open access to the filmmaker’s lounge, opening night reception and film, Private Filmmaker’s buffet and the Sunday awards breakfast. The Filmbuff pass on its own is $50 and is the only way to guarantee your seat at the opening night reception and film, which sells out every year. Weekend and day passes are also available.