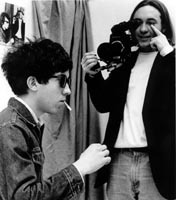 In Search of the Great American Poet

Share
A conversation with Randy Bell and Justin Rice, winners of the Best of Festival award for their film 'Look Back, Don't Look Back' about their obsession with Bob Dylan.
Winner of the top prize Best of Festival Award in Boston Film/Video Foundation’s 25th New England Film and Video Festival, Randy Bell and Justin Rice’s film "Look Back, Don’t Look Back" documents the filmmakers’ obsession with Bob Dylan and their intrepid attempts to interview him. Both Harvard students, Bell and Rice show a resonant grasp of the concepts and attitudes of documentary filmmaking that they’ve absorbed from Harvard faculty, including such luminaries of the non-narrative film world as Ross McElwee, Robb Moss and Alfred Guzzetti. Festival director Devon Damonte recently quizzed Bell and Rice on Dylan and docs. Sometimes they answered in tandem, other times on their own.

DD: What were the circumstances for hearing your first Bob Dylan song, and what song was it?

B & R: First Dylan song? Who knows? Dylan songs are everywhere all the time. It’s hard to pick out a single moment long, long ago when we first became conscious of his music. It permeates our culture.

BELL: I really came to appreciate Dylan when I started trying to play his songs with my cousin Sam, who appears in our movie. Sam is a huge fan, and through him I began to recognize the power of Dylan’s music. I read a quote somewhere: "Dylan sounds like a little kid sitting at a window on a rainy day wondering why he can’t go outside." Early on, I identified with that little kid and felt that overwhelming quality in Dylan’s songs.

RICE: My appreciation of Dylan came through punk rock. I was interested in youth culture, in the anti-parent culture sound. At some point, I realized that the young Dylan lived, in some ways even created, the image of the cool, subversive kid. I read a quote in a Greil Marcus book about the cover of a Richard Hell and the Voidoids record, something like: "Richard Hell looked like a ‘Highway 61’-era Dylan but just after the motorcycle crash." I had it backwards: I started really listening to Dylan because he reminded me of Richard Hell.

DD: What were the circumstances for seeing your first cinema verite documentary, and what film was it?

B & R: We both learned about cinema verite as a distinct style of filmmaking watching Leacock’s "Happy Mothers’ Day." Before that, we’d seen movies that you could probably classify as verite. But the moment of understanding came with that movie. There is a look the mother of the quintuplets, surrounded by greedy cameras, gives to Leacock. It is a privileged moment in which she, alone in the world, singles out his camera as a friend and reveals, with the slightest expression, her hidden anxiety, doubt and disgust. That moment showed us what cinema verite could do: it is so real, so complex, so intense, and so subtle. It is truly magical. After recognizing the power of the style, we began to delve deeper, to watch more verite films, and to think about the relevance of cinema verite in today’s world.

DD: When did you first see D.A. Pennebaker’s documentary "Don’t Look Back"? What impact did it have on you?

RICE: After reading Greil Marcus’ book "Invisible Republic," I became obsessed with learning about Dylan and with making a film about that attempt to learn. I wandered around New York, talked to people at parties. Somebody in some dark, drunken corner started telling me about "Don’t Look Back." I nodded, acted vaguely interested, tried not to give away the fact that I was dying to see the thing. Next day, I rented it, watched it, rewound it, watched it again, rewound it, watched it again. I was enamored, puzzled, overwhelmed, and intrigued. From that first moment I saw it, I could not let it go.

BELL: My story is far less romantic than Justin’s. I watched "Don’t Look Back" when Ross McElwee screened it in a filmmaking class. I thought Dylan was an asshole, but I loved him despite that. Or maybe because of it.

DD: Surely you heard the news reported in "New York Times" about the British literary poobah selecting "Visions of Johanna" as the greatest song of all time. Do you agree with his assessment? What about "Desolation Row"?

RICE: It doesn’t surprise me that Dylan is hailed as a Great American Poet. He draws on a long tradition and speaks in a voice that is both Appalachian and urbane. He writes for all of America, and writes well. Few people disagree. For me, however, no particular song is the best. It is the totality of his songs that amazes me, the way that taken all together they seem to cover everything that has ever been American.

DD: Do you have plans for future film projects? What?

BELL: I’m working on a film about tattoos. Despite advice from many authority figures, I am considering getting one. The film, which covers both getting tattoos and getting tattoos removed, is helping me decide. It’s a movie about being young and worrying about getting old.

RICE: It’s hard to make a movie after graduation from college. You’re on your own. Fighting for resources. Hoping for help of any kind. Despite the terrors of financial independence, however, I plan on making a movie about commerce in America. My family is deeply rooted in Bentonville, Ark., home to the Waltons and birthplace of Wal-Mart. My family’s history and Wal-Mart’s history are inexorably linked. I don’t like Wal-Mart.

DD: In your film description, you described Dylan in "Don’t Look Back" as "nervous, subversive, and stupid." Why stupid?

B & R: Dylan is getting interviewed by "Time" magazine. Dylan: "You don’t tell the truth, you just show pictures." "Time" magazine: "And what is the truth?" Dylan: "It’s a picture, man." While Dylan may have a point here, he is not making it in the most convincing manner. Suddenly a celebrated poet and singer, Dylan finds himself surrounded by people who turn to him for answers to life’s great social and metaphysical questions. They want to know what friends are, if he believes in God, what he thinks about the politics of race. Sometimes his answers are sharp, cogent, and insightful. Sometimes they are spitefully unintelligible and incoherent. Sometimes he just can’t put his thoughts together quick enough. "Stupid" because he’s just one person. "Stupid" because he’s just a kid.

DD: What was it like meeting D.A. Pennebaker? Any surprises?

B & R: Meeting Pennebaker was strange. His house/work space was filled with artifacts. The camera he used to shoot "Don’t Look Back," the batteries he customized to fit both camera and sound, prints of Godard films that you’ve never seen, a sign from the New Hampshire primary (from "Primary"? "The War Room?"). He had a vast supply of stock phrases he would use to answer questions, as if he’d been asked everything before. "We had to get rid of some of the furniture films had acquired," "Dylan has a kind of spiritual ascendancy," "To make a movie you have to put yourself in the center of the world and let it unfold around you." He referred to his famous friends by first name. "Bill" meant William Gaddis, "Norman" meant Norman Mailer, "Allen" meant Allen Ginsberg. But Dylan was still "Dylan." Pennebaker took a lot of time out of his busy life to talk with us. No one else would do that. It was wonderful. He even gave us advice — how to take less obtrusive slates, what aperture to shoot at, how to deal with batteries that run out too fast. Friendly advice, teacher to student.

DD: Okay, tell the truth. Did your faculty Ross McElwee pull any strings for you to get access?