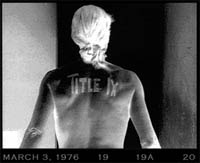 Share
A review of 'A Hero for Daisy'
Well, there was "that incident at Yale," says U.S. Rowing Team member C.B. Sands. The incident to which she refers — a shocking, in-your-face protest carried out by Yale’s 19-member women’s crew team in 1976 — provides the backbone for Mary Mazzio’s debut film, "A Hero for Daisy." The 42-minute documentary about rowing star Chris Ernst is less a call to arms for women athletes of today than it is a love serenade to Ernst, who paved the way for the women who now take their locker rooms and buses for granted.

In 1976, Chris Ernst and her 18 teammates marched into the Yale athletic director’s office, armed with a "New York Times" reporter and the work of a now-famous blue magic marker. Fed up with being relegated to second place behind men’s crew, the 19 women took off their shirts to reveal breasts and backs emblazoned with two words: Title IX. Title IX, the government ruling which mandated gender equality in facilities at federally funded institutions, was not working. Women were asked to be "athletes without dignity," an athletic trainer interviewed in the film says. Ernst read a statement whose words resonated across the country: "These are the bodies Yale is exploiting."

Moving stuff, and even more moving when we hear Ernst read the same words over a recording of her voice from 25 years ago. Ernst, however, is a different kind of crusader today, and when Mazzio cuts to her after she finishes reading the speech, we see her grinning, a little proud and a little sheepish. Still going against the gender grain, Ernst became a plumber after she gave up competitive rowing. "Some people think it’s funny that I’ve gone from fighting for showers to fixing them." Ernst’s sense of humor informs the film, but does not distract viewers from its serious message of equal rights.

In demanding fair practice schedules and their own locker rooms, the women of Yale were demanding respect. That’s the obvious part of "A Hero for Daisy." Less obvious is the psychology of non-acceptance, about which two-time Olympian and Yale rower Anne Warner is still emotional. Warner describes the taunting and jeering she and Ernst endured while working out in the men’s weight room. "You have no idea how that felt, as an 18-year-old female to whom it was very important to be attractive and sexual somehow," she says, "to have these large men somehow, your peers, judging you as somehow disgusting and debased because you were strong and excelling." Another rower, Jenni Kiesling, says, "We were working as hard, training as hard, winning races, and the men treated us as if we were not real athletes." As if the words "women" and "athletes" were mutually exclusive, the men of Yale rowing continued the policy of exclusion that Title IX was designed to eliminate.

Mazzio transports us to a spooky time in history, when universities were just going coed and the women’s rights movement was for many still in its infancy. Interviews with former Yale head football and rowing coaches provide great insight into the period. Yale was a male institution that only begrudgingly went coed, its unwritten mission "to provide 1,000 male leaders," according to Nat Case, the women’s rowing coach from 1974-1993. Women were even less welcome on the athletic field than in the classroom.

With Chris Ernst as their unofficial leader, Yale women’s crew forged its way through uncharted waters. Senator John Kerry of Massachusetts, Yale ’66, says, "What Chris Ernst did is nothing short of spectacular," going so far as to compare her to Rosa Parks. Rowing is not a sport generally associated with struggle — competition, yes, but not socioeconomic hard times. Statistics that Mazzio lists at the end of the film, which show the tremendous increase in girls’ participation in high school sports since Title IX was implemented, are impressive indeed. More powerful than the statistics, though, would have been some of these girls themselves. Anne Warner says Ernst’s effects will be felt in women’s athletics for decades, but one interview with a rower on Yale’s women’s team today does not illustrate Ernst’s far-reaching legacy. One need only look at the ever-increasing popularity of the WNBA, for example, to see the strides that have been made, but Mazzio unfortunately never lets her camera stray far from the river. The impact of the film, and of Chris Ernst’s trailblazing, is weakened as a result of the narrow view that Mazzio takes of athletics.

"A Hero for Daisy" is a good-looking movie. It looks expensive, and well suited to its subject: the rarified world of Ivy League rowing. Mazzio knows what she’s doing behind the camera. Her cuts are intelligent and clever, as are the interviews and images she uses to secure Ernst’s place as a sports hero. In spite of the film’s limited worldview, the feeling that one comes away with after watching "A Hero for Daisy" is one of pure empowerment. Even the soundtrack, guitar-driven rock (no Lilith Fair warbling here), underscores this. The Daisy of the title is Mazzio’s daughter. Ernst truly is a hero for all women and girls, but equally significant: Mazzio dedicates the film to her son as well.