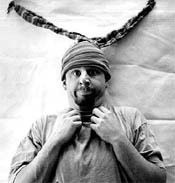 Share
A whirling dervish of creativity, Paul Wagner talks about his varied comedic acting career which has led him from Dunkin' Donuts to 'Next Stop Wonderland.'

What do you do when you have more great ideas than you know what to do with? You act. You direct. You perform comedy routines. You write stage plays, commercials, and TV scripts. Basically, you do what Paul Wagner does, and that’s just about everything.

Wagner is a whirling dervish of creativity in the national and local New England entertainment scene. When he’s not performing on stage or screen, he’s writing for the small screen. When he’s not hosting a TV show, he’s performing comic hosting duties for corporate tradeshow. And if that’s not enough, he’s also in the process of building a Web entertainment business.

Wagner managed to take a brief break from his myriad activities to tell me how it all began, and how he manages to do it all.

HM: When and how did you decide to get into the entertainment business?

WAGNER: I didn’t set out to be in the business. I went to Boston College, where I majored in computer science and mathematics. After graduating in ’86, I took a job at Xerox as a systems analyst. I was the guy who helped design corporate networks. It was a pretty stale corporate environment, and I think most of the people there thought I was a lunatic. I did crazy things like take my pants off in meetings. But for some reason they kept promoting me, I think because I inspired people to think creatively. During this time, I went on a sort of spiritual quest. I met with an Indian guru who encouraged me to "open my mind" and convinced me that I needed to find another level of expression. So after a year at Xerox, I quit my job and landed a position in an improv comedy group. I traveled around the country performing at nightclubs. The downside: my salary went from $50,000 to about $12,000.

As soon as I got back from the tour, I went on an audition for a WB kids’ show. I beat out 1,000 other actors and won the role as host of the show. It was a great opportunity; I got to play ten different characters and the job lasted six years. I also won eight New England Emmys for my work.

HM: How did your corporate experience come into play?

WAGNER: One of the ways I make a living is to host multimedia corporate and educational tradeshows, primarily for events like international sales meeting for large corporations. I mix my hosting duties with a comedy routine. In fact, I’m constantly referred to as the male Tracey Ullman because of all the different types of characters I play. It also helps that I’m half-geek, because I relate well to corporate techno geeks. I speak their language, and I can take just about any dry or technical content they give me and turn their tradeshows into something fun.

HM: How does acting fit into your repertoire?

WAGNER: I love working in movies, so I audition as much as I can. I had a great experience working on "Next Stop Wonderland" in the role of Bob the wacky security guard. There was a real sense of community on that set. I was also in "Enough Already" as a sarcastic, aggressive lawyer/securities manager. I’ve done over 40 commercials, too, from spots for the lottery to Papa Gino’s.

HM: What types of roles do you typically play?

WAGNER: I tend to play comic, exaggerated characters or the role of the husband. Right now, I’m in a Cider Jack commercial as the guy going nuts on the dance floor.

HM: How do you feel about the opportunities for actors in New England?

WAGNER: I’d like to see more films shot here which rely solely on Boston talent. Most Hollywood films come here with talent already attached. I often watch films that were shot locally and think to myself there are plenty of local actors who could have played that role a lot better.

The good thing about Boston is there’s a lot of support here. The Mass Media Alliance is
amazing and a great way to network. I’ve also gotten a lot of support and encouragement from producer Laura Bernieri.

HM: On top of everything else you’re a writer. What kind of projects have you been involved in?

WAGNER: After working on the WB kids’ show, I wrote a college comedy show called "Careers, Sex and Self-Esteem," which I performed at college campuses around the country for two years. I also wrote "The God Show." It’s a stage play that played for three months on the Cape this past summer to great reviews. In the play, I pretend to "go live" to my different personas and make fun of traditional religions in the process. Right now, I’m trying to decide whether to perform it at the Natick Center for the Performing Arts or the Hasting Pudding Theatre. I also plan to tour with it around the country.

I’ve also been hired to write for TV, although one potentially big opportunity didn’t quite pan out. I was hired as head writer for "The Keenen Ivory Wayans Show." Four days after I went out to L.A., the show was canceled.

HM: What’s next for Paul Wagner — not that you don’t have your hands full already?

WAGNER: I was recently hired to develop a Web entertainment business, which includes hosting and writing shows on the Web. Avid is about to come out with the technology to create broadcast quality Web sites, so the opportunity is ripe. I also hope to keep my hand in broadcast TV and eventually write and star in my own TV talk show.

HM: How do you juggle so many talents, interests, and projects at once?

WAGNER: I’m completely obsessed with what I do, and I always have at least 12 ideas going at once. I see myself as father to several children. I pay attention to whoever’s crying loudest for the bottle at the time.