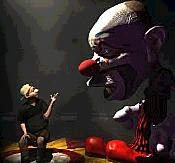 Ever sit through a movie thinking it had just plain gone on too long? That’s what can make a short film so good: it doesn’t have to fill any sort of time requirement. The short films that comprise "Outstandingly Entertaining Short Films" range in length from less than a minute to almost 20 — and not one wears out its welcome. Indeed, this fine collection of shorts offers a diverse mix of a variety of styles and themes, each film entertaining in its own special way.

The shortest entries include Jarl Olsen’s "Devil Dog," in which two beach-going young girls pull the strings of a talking doll; and "Culture," a one-minute wordless commentary written, directed by, and starring Ari Gold. Longer films include Mike Mitchell’s "Herd," in which a hapless burger flipper makes the acquaintance of an otherworldly being; and Jay Lowi’s "12 Stops to Nowhere," an adventure that is not your typical boy-with-bag-full-of-cash-meets-girl-while-fleeing-from-numerous-gun-toting-baddies flick.

In between are such gems as "Ouvré la Fenêtre (Open the Window)," Steve Stein’s clever parody of French films about a guy named, well, Guy, who suffers from a whopping case of ennui; Chris Landreth’s existential, absurdist, computer-animation marvel "Bingo"; Charles Call’s "Peep Show," an amusing twist on the age-old quest for a seedy, fantasy-filled thrill; "Stubble Trouble," a best-foot-forward effort by Philip Holahan, which chronicles an evening of marital woes for a quite unusual couple; and "Titler," the creation of native New Englander Greg Roman, featuring a full-figured Führer singing show tunes in drag.

All in all, the aptly titled "Outstandingly Entertaining Short Films" makes for an evening of silly, witty, and often perverse fun. And if, by chance, one of these films doesn’t suit your taste — well, you won’t have to wait long for the next one that will.

The 75-minute program, sponsored by The Boston Beer Company, Sam Adams, begins at the Museum of Fine Arts in Boston on February 9 and runs until February 25. A reception follows the premiere on the 9th, at which some of the film artists will be in attendance. For further scheduling information, consult the MFA’s Web site at http://www.mfa.org.