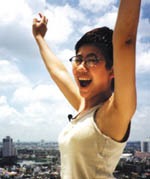 Share
Marlo Poras talks about the making of 'Mai's America,' a documentary about the experiences of a young exchange student who comes to America from Vietnam.
Here’s an easy one: How many times have you thought, "Wow, that would make a great story"? But now the question becomes a bit more difficult: How many times have you followed through? What’s remarkable about Marlo Poras’ work in progress, the documentary "Mai’s America," is that she had the courage to take that simple thought and turn it into something real, something tangible — to actually tell the tale.

"Mai’s America" presents the experiences of a young exchange student who comes to America from Vietnam. But not just Vietnam — Hanoi. And not just America — Meridian, MS. In Mississippi, she meets a cast of characters you’d think only exist in fiction. There’s her original host family, self-proclaimed rednecks who don’t really talk to Mai or each other. Then there’s Chris, the gay transvestite, who, by the middle of filming, has decided he wants to go back to dressing like a boy and is ready to get married and have children. There’s also her second host family, a young African-American couple with a new baby who appear happy and well adjusted but really suffer from serious marital problems, and also her Vietnamese-American friend, who initially hates Vietnam, but has a change of heart after visiting the country halfway through filming.

Though the people around her make for interesting scenes, what makes this film so strong is Mai herself. She is eager to learn, curious about everything around her. Mai lives life in the truest sense: she questions, she listens, she observes, she experiences.

In fact, Mai and Marlo aren’t so different.

Marlo Poras is a 28-year-old woman who’s been working on "Mai’s America," her first film, for the past year and a half. She had the idea for the film while living and working in Hanoi. Poras’ story starts out like many other 28-somethings’. She’d begun a career as an assistant editor in feature film but decided it wasn’t for her. After quitting her New York job and moving to Vietnam to join a friend already working there, she landed a job producing AIDS films for country-wide distribution. Poras’ friend taught students who were about to embark on a year as exchange students to America. Back in America on a visit, Poras sought out films told from the North Vietnamese perspective. She found none. And that’s when she thought this would be a great story: North Vietnamese exchange student hits American culture — a simple idea, a good idea, and one she was determined to follow through on.

Poras met her protagonist in the next year’s crop of exchange students. She became more involved, helping the students learn about American culture. And she kept her eyes open for potential people to follow. Initially, she selected four girls, filmed each of them in their homes in Vietnam and visited each in their new homes in America. Choosing Mai, though, came naturally.

That’s the other thing about Marlo Poras: she listens to her instincts. "I look at this experience as film school," she says.

Real-life film school comes with its own challenges and rewards. To make the film, Poras saved money and even invested some. She also committed herself to working on the film and only the film: She doesn’t have a day job.

It’s easy to dismiss Poras’ experience as anomaly: Who has the money or the time to devote a year and a half to a documentary project? But that does an injustice both to Poras and her film, and to human creative endeavor as a whole. Her work is an example of the old adage that credits perspiration over inspiration.

Poras was a one-woman show. She shot the footage, handled the audio, and relied solely on natural light. (Though at times she regrets that last decision. Some of the night scenes do suffer for not having been lit, but the emotion that shines through makes up for the grainy picture.)

When asked what young people who want to get into documentary filmmaking should do, Poras says, "Get a job in the field and then go play with your camera as much as you can."

Poras has shot almost 140 hours of film. Primary filming has stopped, though she admits she may shoot another interview or two. She doesn’t know how long the finished product will be or where it will be shown; she’s hoping for public television or HBO or a film festival.

Mai is currently enrolled in Tulane University. Documentarian and subject keep in touch "a lot." As Poras puts it, they have a nice friendship. So what about the line between filmmaker and subject?

"It was impossible to stay out of things," Poras says. "Though I was always involved, I tried not to inform Mai’s judgment of things."

And what else could she do? Mai had serious problems with her first host family and asked Poras’ advice, which she gladly gave. Though they became close, Poras chose not to introduce herself as a character in the film.

Meanwhile, Poras lives outside of Boston and works on her film every day. "I’m obsessed," she says. "I have so much footage; I’m organizing like mad."

But like every other part of the process, she loves it. In fact, when asked to identify her favorite part of this experience, she’s at a loss. "I’ve loved it all," she says. And then, after a pause, "Learning. Since it’s my first film, watching myself learn and get better, as I look at my footage — it really excites me."