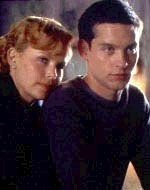 My Life as an Orphan

Share
A Review of 'The Cider House Rules.'
One of my most successful operating principles is to avoid theatrical productions involving singing orphans. "Annie," "Les Mis," and the like generally drip with sentimentality and feel-good endings. While there isn’t any singing in Lasse Hallström’s ("My Life as a Dog") adaptation of John Irving’s "The Cider House Rules," there certainly are a bevy of orphans. And when it’s just orphans, without singing—well, you’re taking your chances.

When Andrea McArdle sang the lines, "No one cares for you a smidge/When you’re in an orphanage," she clearly hadn’t met the likes of Dr. Wilbur Larch. Dr. Larch (Michael Caine, with an American accent) runs the orphanage in St. Cloud’s, ME, in between the two world wars. Pregnant women arrive in St. Cloud’s, deliver their babies, and leave them there. Dr. Larch attends to the births and then cares for the children. He also performs abortions. One of the orphans, Homer Wells, twice adopted and twice returned, has become Larch’s surrogate son, and Larch wants him to follow in his footsteps. Homer (Tobey Maguire) doesn’t want to perform abortions and wouldn’t mind seeing the world beyond St. Cloud’s. When a stunning blonde (Charlize Theron) and her Army pilot boyfriend stop briefly at St. Cloud’s, Homer joins them on a trip of–what else?–self-discovery.

Irving wrote the screenplay himself, and he’s remained quite faithful to his story while truncating it substantially. This is Irving at his most naturalistic–no transsexuals or bitten-off sex organs here–but also at his most sentimental. He’s got an ether-sniffing doctor performing illegal abortions, yes, but then he’s also got a sniffling orphan named Fuzzy asking questions about God.

This is Homer’s story, however, and his character would have benefited from some sentimentality, or some feeling of any kind. His equanimity is remarkable; his expression is much the same while performing surgical procedures, attending his first movie, and having his heart broken. This isn’t Maguire’s fault; the character in Irving’s novel was written precisely the same way. Irving’s argument seems to be that orphans learn not to show how much they need people. Maguire’s performance doesn’t transcend this concept, however, and the character’s lack of an inner life causes a flatness in the story. If Homer doesn’t care what happens to him, why should we? Irving’s none-too-subtle (though well-argued) message doesn’t help. Most moviegoers want a story, not an after-school special.

That flatness is a shame, because this is a visually stunning film. Homer’s world may be circumscribed, but it’s certainly lovely. Filmed on location in Massachusetts, Vermont, and Maine, almost every outdoor shot is stunningly gorgeous. Even so, this isn’t clapboard New England; it’s rambling old houses and hardscrabble mountains and forest running along the beach—and, okay, a quaint little train station, complete with Irving himself as stationmaster. Perhaps even more stunning is Charlize Theron, who glows on the screen as only a platinum blonde can. Where her character finds time for her perfectly marcelled hair and bright red lipstick while out lobstering with her father is anybody’s guess, but it doesn’t matter.

Even so, buxom blondes don’t impact on the presence of theatrical orphans, and those orphans have once again proven their barometric usefulness. "The Cider House Rules" is a well-intentioned, visually lush film with an unfortunate emotional flatness at its core, and too many orphans on its periphery.