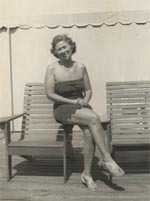 Share
Local filmmaker Laurel Greenberg talks about her film '94 Years and 1 Nursing Home Later' which screens this month at the Boston MFA.

Belle Greenberg probably never imagined she would die alone. She was a classic, selfless matriarch, who took in and took care of four generations of family: her aging father, her cancer-ridden mother, two grown brothers, her own children. In return, to the day she died, she had nieces and cousins who called her their favorite, children and grandchildren who loved her dearly, but no one who could or would take her in. At age 94, after spending the last 11 years of her life isolated and often depressed in a nursing home, she died with no one at her side.

Just how this could happen is a question that Boston filmmaker Laurel Greenberg, Belle’s granddaughter, felt driven to solve. Her search for personal answers resulted in a documentary, "94 Years and 1 Nursing Home Later," that sounds a warning bell for us all. "The film provokes people to think about their own situation. I’m prepared after every screening to have people come up to me and tell me about their grandparents or parents," says Greenberg. "People recognize personality traits in the characters. They recognize the elderly person who doesn’t want to admit that they need help and doesn’t want to be a burden. They recognize maybe a little bit of themselves in my mother or my father, who earnestly loved my grandmother and wanted to do things but weren’t so sure what was right or didn’t read the signals right."

Widowed at age 59, Belle left Philadelphia to start a new life in Florida. For the next 23 years, she was active, independent, and even volunteered at a nursing home. Then, in 1983, a jogging injury left her unable to manage on her own. Everyone agreed that the Philadelphia Geriatric Center, where Belle would be near her son, Greenberg’s father, was the solution.

This was the beginning of a decade of failed communication, much of it caught on tape. Both Greenberg and her father documented their nursing home visits. Greenberg weaves together this footage with old photos, home movies, and recorded phone calls as well as recent family interviews to reveal Belle’s story and a troubling family dynamic.

The difficult and awkward evolution of the caretaker parent to the dependent elder, the fragmenting of families across the country in an ever less-rooted society, the struggle to balance personal needs with familial responsibility–these are plots that play out in many of our lives and will continue to grow in urgency as the population ages. "The film doesn’t say that there is a right or a wrong or any easy answer," says Greenberg. "It doesn’t show how to talk about it, but it shows that it’s urgent to do the best you can and bring it up and not make assumptions."

As with all of Greenberg’s award-winning work, including "No Vote, No Voice," which aired on PBS, "94 Years" effectively combines film and video footage. The black-and-white Super 8 footage from Greenberg’s final visit adds a somber finality. Combined with clips from a lifetime of home movies, the effect is highly intimate. One gets the sense of watching the film that flashed past Belle’s eyes before she died, spanning friends, family, and better days to the nagging, unresolved disappointments of her final years. The nursing home tapes add powerful cinema verite moments. During one visit, Greenberg’s mother sings and plays "All I Ask of You" on the piano. Belle sits stranded in the background as the words she can’t say fill the room: "Anywhere you go, let me go, too. Love me–that’s all I ask of you."

"This piece was much more personal and has more breadth and scope than my previous work," says Greenberg. "It’s a much more complex story. But I think I did tell my grandmother’s story, and it speaks to me and to the problems a lot of us are dealing with now."