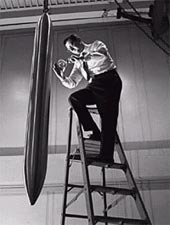 Share
A review of Cathleen O'Connell's 'Time Capsule: Message in a Bottle'

One day during the last weeks of my senior year of high school, my English teacher gave us a special in-class writing assignment: to write a letter to ourselves, which she would keep for five years and then mail back to us. Needless to say, five years later I was pleasantly surprised to receive this letter, which I had forgotten ever existed. The content of the letter, of course, was not what I would have most liked to remember from high school, but I was reminded both of peers I had lost track of and of the person I was at the time.

Messages to the future are hardly limited to a few handwritten pages in a legal-sized white envelope, and Cambridge filmmaker Cathleen O’Connell’s documentary "Time Capsule: Message in a Bottle" explores the variety of forms these messages can take, tracing the history of time capsules from their predecessors the pyramids (not "true" time capsules, since their contents were for use in the afterlife, not by future generations) to the present day, in which encyclopedic databases of human history and achievement are placed inside space probes.

The earliest modern-day time capsules include the Crypt of Civilization at Oglethorpe University in Atlanta, not to be opened until the year 6939, and the Westinghouse time capsule at the 1939 New York World’s Fair. "Message in a Bottle" also surveys some of the outstanding capsules of recent years, including the world’s only aboveground time capsule (in Braintree, MA), Andy Warhol’s 610 cardboard boxes full of eccentric paraphernalia, and the world’s largest time capsule, which houses an entire Chevy Vega. Along the way, viewers get a taste of the variety in form, content, and expected lifetime that time capsules can take, as well as some handy tips for creating a time capsule of one’s own.

It should be no surprise–with interpersonal communications becoming increasingly transitory, face-to-face interaction being replaced by telephone calls, well-constructed letters becoming obsolete in the days of slapped-together emails which are read quickly and then dragged across a screen to a silicon Recycle Bin–that time capsules are becoming more and more prevalent, whether inside a four-foot steel cylinder filled with argon gas or in the form of a published memoir. Indeed, all art (this film included) is yet another attempt to communicate with posterity, another attempt at an immortality of sorts.

Archaeologists remain skeptical of the worth of time capsules, claiming that what we predict will be of interest to our descendants is unlikely to be as fascinating to them as the things we so take for granted that we wouldn’t think to include. Still, our choice of what we feel is worth preserving about ourselves–indeed, the fact that we think to make time capsules at all–surely must tell something about who we are. So what will people think, in the year 6939, when the Crypt of Civilization (if it still exists, if there are still people around to open it) is finally opened? Only time will tell.