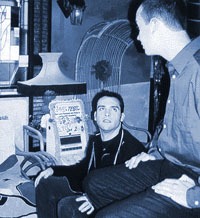 Share
In his first feature film 'Gavin's Way' Dan Farquharson takes on the challenges of writing, directing, and starring.

Described as a Boston take on "The Brothers McMullen," "Gavin’s Way" just wrapped on Halloween with a budget about a tenth of "Next Stop Wonderland’s." In his first feature film (he won’t admit to the first video he directed), Dan Farquharson takes on the challenges of writing, directing, producing, and starring.

LF: From the first day you decided, "I’m going to do this," how long has it been?

FARQUHARSON: A year and a half. We had other producers who wanted to make it a bigger-budget film, but they wanted to take away some of the other things. They wanted the script. I wanted my shot at producing, directing, and of course I wrote the script so that it was my vehicle, and I wanted to act in it, and I wasn’t willing to do just one thing.

LF: Any resources you read or watched to helped you prepare?

FARQUHARSON: Actually, yes. When I first wrote the script, I ran it through a group that I belong to, the Harvard Square Scriptwriters, and they were very key in helping me go through the script with a fine-tooth comb. That’s where I really thought that this was a movie that was good enough to go ahead and take these risks with. And then I also, through the group, met a gentleman by the name of Frank Ciotta, who directed a movie in town called "The North End," and he showed it around to some of the folks that he knows. And he gave me a lot of positive support.

LF: Is this your first film?

FARQUHARSON: For most of the perspective, yes. I directed a feature-length video six years ago that’s sitting on somebody’s shelf. I think that helped a lot, because the script was very loose and there was a lot of improv, so I think that definitely helped with the style, working with the actors. I helped in the idea, but there wasn’t much of a script, and it was improvised on a week-to-week basis.

LF: What was it called, do you want to admit?

LF: Any surprises so far, where you said, "Oh, yeah, I wasn’t looking for that, but that was great"?

FARQUHARSON: I’ll tell you, in the fact that we have a very limited budget, and of course the locations that we came out and scouted, we were looking for functional locations, and as we came across them, we came across this place, the Beachcomer, out here in Newbury, and it’s phenomenal. It’s a place like I’ve only seen in the movies. It’s like something out of a Frankie Avalon movie. It’s just fantastic. So the locations, the performances we’re getting out of the actors, fantastic. And actually, the response from the communities–we’re getting a lot of extras, a lot of welcomes from the communities that we’re in, and everybody’s kind of pitched in and donated space and food and even their own bodies to be a walk-on.

LF: Where did the money come from?

FARQUHARSON: The funding for "Gavin’s Way" came through a friend of one of the actors, a very spirited individual named Denton Hunter, and he heard about the project and said, "You know what? I can do that." And through a group of private investors, he came up with the funds, so that’s another reason I was very surprised by the community opening their arms. Most of the investors were right here. They were local people willing to help out this project.

LF: What first made you think, "Here’s why I want to make movies"?

LF: Denton hasn’t produced anything prior to this that I know of. How are you on having someone spirited but not necessarily experienced?

FARQUHARSON: Well, it would have been nice to be a little more prepped. We’re taking each day as it comes, and we’ve run into a few little surprises. But the fact that he has so much drive and we’re learning so much as we go through, it’s just going to help on the next project. Little day-to-day things–getting people there on time, housing, meals there exactly on the dot–it’s one of those things where you have to really reach and opt for functionality over pleasing. I know that Denton’s gone way over. He loves to spoil everyone. At the same time, he’s gone out and spent three times what we had budgeted on lunch to boost morale, but then it was ten minutes late and people grumbled. So there’s a lot of functionality that needs to be cleaned up, but for the most part, Denton’s done a fantastic job, and it’s been a lot of fun to work with him.

LF: What advice would you give to people who decide they want to make their own film?

FARQUHARSON: I mean, you could show your script to ten people, and nine people could tell you it’s bad. What you have to do is believe, be willing to make changes, really get to the heart of the project. It took a lot of rewrites to get "Gavin’s Way" where it is. What we had to do to rewrite it was really get back to the roots of the story, focus on the point we wanted to make, or points, and we did that and the clearer we got on that, the easier it was to make the project. I just hope anybody that’s out there working on a project understands what it takes to get it done, and after you look at all the negatives, throw them away, get back to the roots, and just go do it. People have to go with their gut feeling.

LF: What are your hopes and plans for "Gavin’s Way"?

FARQUHARSON: I just want to see an audience laugh. I hope the people enjoy it. Our goal is to get it into film festivals, pick up a distributor, and get it out there. Every filmmaker’s dream is to get that thing shown at Sundance, and we’d like a shot.

LF: Only your second screenplay, "Gavin’s Way," and it’s the one you decide to go all out on. So I’ve just left the theater; what do you hope I’m feeling?

FARQUHARSON: I’m hoping you’re not content just working a job that you barely tolerate. First of all, I’m hoping you laughed a few times, and you’re willing to go out there and take a risk. Even if people tell you it can’t be done, you’ll feel enthused enough to go out there and try something that you’ve always dreamed of doing. This is a story about making the biggest decisions of your life. Everyone’s there, in your 20s, 30s. At some point, you have to decide what you REALLY want to do, stop being a follower and go out there and grab your destiny.

FARQUHARSON: I don’t know about that. (laughs)