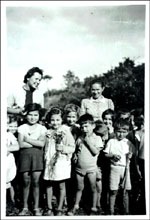 A Miracle Happened There:

Share
A Review of 'The Children of Chabannes'
In their moving documentary "The Children of Chabannes," filmmakers Lisa Gossels and Dean Wetherell bring us the story of a school director in Vichy France who defied directives from the Nazi-sympathizing leadership, and in doing so saved more than 400 Jewish refugee children from almost certain death. Many thanks must be given to Ms. Gossels and Mr. Wetherell for bringing this previously untold story to light, and for reminding us of the power of the individual.

Beginning in 1939, after Kristallnacht, many Jewish parents sent their children away from Germany, fearing for their safety. The Oeuvre de Secours aux Enfants (OSE)–the international Jewish organization for health care and children’s welfare–worked to rescue as many children as possible, and helped relocate many of them to Vichy France. For these families, though, the rescue was bittersweet: most children never saw their parents again after they reached France.

The journey led more than 400 of these children to Chateau de Chabannes, a school in the Creuse region, a remote, rural area in the heart of France. Here they were taken in by Felix Chevrier, the school¹s director, and by two local schoolteachers, sisters Irene and Renee Paillassou. These three, along with a handful of others, instructed the children in both book learning and also more basic survival skills. They were taught French to fit into their new surroundings. They were given regimented physical training to keep them healthy and strong, particularly useful if escape became necessary. The children were taught chemistry, math, and other subjects, as they would be in any school. But most importantly, they were given love, a safe environment, and a stable "family" of adults and other children. This safe haven lasted until late 1942, when the Nazi fervor was closing in, and the children were dispersed–many to Switzerland, some to private French homes, some to the Resistance, and others to jobs in the OSE. As a direct result of Chevrier¹s actions, only six of his children were taken to concentration camps; of those, four perished. (It is not insignificant that Gossels names the four children who did not survive. This film emphasizes the individual; to this day the Paillassou sisters–despite all the children they saved–regret terribly the loss of these four.)

Filmmaker Gossels, whose father and uncle were two of the children of Chabannes, saw the occasion of a reunion of the "children," now in their 60s and 70s, as an opportunity to interview many of those who were there, both students and teachers. (Incredibly, the Paillassou sisters, now in their late 80s or early 90s, also attended the reunion.) Through firsthand accounts, photographs, and the words and pictures of a journal kept by the teachers and children, we learn of the at-times-idyllic world of learning, musical performances, and walks through the local countryside; of a shortage of food that kept the children constantly hungry; of the deportation of two teachers and ten students to a French internment camp, from which six children were sent on to concentration camps; of how two of these boys, despite incredible odds, survived not one but multiple camps; and of how school director Chevrier used every means in his power to prevent the loss of any more students.

What is ultimately most remarkable–and this is a point I will make carefully–is that under Chevrier’s guidance, amazing results were produced from relatively small acts of defiance. When the police arrived at the chateau to steal away a quota of children, many of the children "coincidentally" would be out on long walks. Other children would be away for short stints in hospitals. And still other children–misidentified by misspelled names on the police lists–could honestly be said not to be in the school. Time and time again, Chevrier threw up these roadblocks, some seemingly minor, but taken as a whole they provided enough resistance to save the vast majority of the children.

In that Nazi-dominated era, despite de-personalized descriptions and depictions of German hordes killing the Jewish masses, the fact is that individuals killed individuals. In the case of Chabannes, happily, there were individuals who were strong enough and courageous enough to stand up against the terrible injustices occurring throughout Europe. And for the children of Chabannes, it made all the difference in the world.