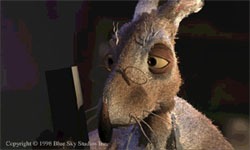 Nothing But Blue Sky for ‘Bunny’

Once in a while, a film comes along with such a moving, heartfelt story line that the production values become secondary. But in the case of the seven-minute award-wining short "Bunny," it’s hard not to appreciate both.

That’s because the film was created using an advanced computer-rendering technique called radiosity, which mimics the delicate properties of natural light. This technique, never used before in film, enabled writer/director Chris Wedge and his crew at Blue Sky Productions in New York to create an unparalleled dimensionality and organic realism.

Fortunately, however, "Bunny" doesn’t fall into the trap of too many other computer-animated films, in which the technology is the star and a flimsy story is built around it. According to Wedge, "The key to ‘Bunny’ is that it is a film experience and a story first. We just happened to go insane with the technology, but it’s designed to hide that fact. We don’t want people to think too hard about what went into creating it. We just want them to sit back and enjoy it."

This year’s Academy Awards voters certainly were impressed by this quirky but heartwarming tale of a feisty but aging female rabbit and a relentless moth. They bestowed upon the film the 1999 Academy Award for Best Animated Short Film.

For the following interview, I spoke with Blue Sky’s PR person Brooks Jewell and Doug Dooley, one of the two lead animators who was responsible for a majority of the scenes in "Bunny."

HM: First, tell us about the history of Blue Sky Productions.

JEWELL: The company was co-founded by Chris Wedge in 1987 to develop software to create high-resolution, computer-generated character animation for advertising commercials, feature films, and theme park effects. Our focus is on creating high-quality computer-generated imagery and character animation with the highest production standards possible. We currently have 70 staff members whose skills range from traditional cel animation to the latest in post-production digital technology. We’ve produced several hundred TV commercials and have completed several computer-animated characters for box-office hits such as "Star Trek: Insurrection" (1998); "Alien Resurrection" (1997); and MTV cult classic Joe’s Apartment," which was our first piece of film work.

HM: Where did the idea for "Bunny" come from?

DOOLEY: Ten years ago, Chris was vacationing in the mountains where he was inspired by the wildlife around him. The story evolved from there.

HM: Where did the inspiration for the character of Bunny come from?

DOOLEY: Chris and I had a lot of fun creating the character. Chris was inspired by his elderly aunt, and I added in some attributes of my grandmother. By mimicking their habits and the way elderly people move, "Bunny" seems a lot more lifelike, not your typical animated character.

HM: Why did "Bunny" take so long to come to life?

DOOLEY: The technology simply wasn’t there to make it happen. It’s taken a long time for computers to catch up to the speed of radiosity. Radiosity is a software technique that simulates how natural light works.

JEWELL: The film also took a long time to come together because it was a labor of love. Chris and his team were working on it on their own time, whenever they could fit it in between paying film and commercial work.

HM: Explain more about the advantages of radiosity.

DOOLEY: We wrote the program for it at Blue Sky. And again, we weren’t able to use it before "Bunny," because it’s very time-consuming for computers to process. The big advantage of radiosity is that it mimics the subtlest properties of natural light, including bounced light. For example, if a purple object is standing in front of a white wall, the purple will be reflected on it. The technique allowed us to create unparalleled dimensionality and organic realism.

HM: Tell us about the animation process for Bunny, from beginning to end.

DOOLEY: First off, Chris drew the storyboards and figured out the framing for the film. We then input the boards into the computer and performed 3D modeling using SoftImage. From there, we did "Character Set-up," or rigging, as it’s sometimes called, which allowed us to put bones in Bunny and make here move like a real person. The set and objects in Bunny’s house were then created using CSG (Constructive Solid Geometry). Adobe Photoshop and Amazon were then used for texture painting. After that we create "the performance" of each character, then hand it off to a technical director to do the entire rendering. Basically, animation software is loaded into our proprietary system, and it’s at this point that subtle light and shadows are added.

In addition to radiosity, the R division also worked on applications to create flared lights, fur and volumetric shadows, which allowed the characters to cast long shadows through shafts of light. The fun was created using invisible cones that were texture mapped with hundreds of short and occasional longish hairs.

HM: How did Massachusetts-based Compaq come into the picture?

DOOLEY: We spent four weeks at Compaq, and they were really instrumental in helping us bring the film together. They provided us with a really fast machine for rendering the film, a Compaq AlphaServer RenderPlex system that ran on 14 computers and had a total of 164 processors. They generated test frames so we could see how everything looked, and they did all the intensive calculations we needed very quickly.

HM: What kind of impact did winning the Oscar have on Blue Sky?

JEWELL: After Oscar night, we were swamped with calls for about three weeks from directors and prospective clients. It has definitely opened a lot of doors to more commercial work.

HM: Where does "Bunny" go from here?

JEWELL: The festival circuit. It screened at the Film Forum in New York in May and is currently being screened as part of the Spike & Mike Film Festival, which tours over 50 states in the U.S. and Canada.