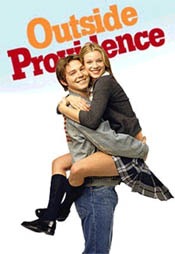 There’s Something about the Farrellys

Share
a review of 'Outside Providence'
I now live in the town where I went to college, and with the turn of season I’ve found myself drawn back to the school. Spotting a copy of "Derrida and Feminism" nestled in a backpack snapped me out of it, but "Outside Providence" is the perfect movie for anyone contemplating lost youth. Or maybe it’s not. It brings into sharp relief the things you might miss.

The plot is pretty much your standard coming-of-age story: boy screws up, boy gets shipped off to prep school instead of jail, boy meets girl and learns life lessons. The details, however, keep things from getting too maudlin, frequently a failing of prep-school movies (see "Dead Poets Society," "Scent of a Woman," etc.). The working class Tim Dunphy (Shawn Hatosy) doesn’t struggle to fit in, he’s not ashamed of his Pawtucket friends, and he isn’t forbidden to see his girlfriend by her preppy parents. Instead, the filmmakers show Dunph, as he’s known to his friends, smoking a lot of weed, hitchhiking, and coming to terms with his father and his future.

While "Outside Providence" isn’t covering a lot of new ground, there’s a genuine quality to the movie that’s refreshing. These characters aren’t growing up by reading poetry by candlelight; they’re getting wasted at parties that are a dead-on evocation of high school. Amy Smart, as Dunph’s girlfriend, Jane, is essential to that genuineness: she’s heavenly and perfect, but somehow not so movie-star beautiful that you can’t imagine her in this context–sort of like Julia Roberts was in "Mystic Pizza," before she was processed through the Hollywood machine of publicists and personal trainers.

The same cannot be said for Alec Baldwin or George Wendt (as one of Baldwin’s poker buddies). There’s something that screams Hollywood about both of them. Their skin is a little too smooth; it’s as if they’ve had one too many fruit-acid facials to pass for commoners anymore. While Wendt should be perfect for his role, you never quite get past this quality (and it doesn’t help that the film’s only hint of after-school-special falls on him). Alec Baldwin, of course, has entirely too perfect a face to play this part, but he redeems himself with his performance. He’s gravel-voiced and rheumy-eyed, willing to play the loving but unsentimental father.

Perhaps this lack of sentiment is partly responsible for the backlash against the Farrellys. Commentators constantly bemoan the "gross" humor of "There’s Something About Mary" or "South Park," wondering how American entertainment has fallen to this level. What these commentators ignore or can’t see is that the films are actually funny, and subversive in their willingness to present a vision other than the usually accepted one. With "Outside Providence," they’ve also created a film that’s evocative and sweet.

See clips and trailers at http://www.outsideprovidence.com/media.html