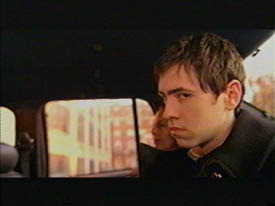 Keeping it Short and Not So Sweet

Share
Filmmaker Alexander Rose talks about his short film 'Bill vs. the City' which was just picked up for distribution through the Internet.

New England filmmaker Alex Rose, a Providence native and Hampshire College graduate, recently completed the (very) short film "Bill vs. the City." Only two minutes long, "Bill" takes place entirely within the confines of a taxi cab, and is told in voice-over by a teenager with an impressive amount of hostility toward his stepfather. The short has received distribution and is making the film circuit.

NEF: How did you become interested in short film vs. features?

ROSE: For one thing, they¹re cheaper to make. But even if could afford to make features, I would probably stick with the short format. It¹s less restrictive. A few summers ago I went to LA to study with a screenwriter, and the experience was overwhelmingly negative. I¹d had problems with mainstream movies since high school, but during those few months, Hollywood in my mind ceased to be this vague, amorphous blob of wrongness and became an efficient machine whose problems took on very definable qualities, such as the constraints of the Syd Field paradigm, a loathsome formula of screenplay writing which governs 95% of the movies that come out of the studios. Short films don¹t have this problem. It¹s an infinitely more open form.

NEF: What else did you find so disconcerting?

ROSE: The assumptions that studio execs make on what people want to see. They think like drug dealers – "We’re just giving them what they want" – not bothering to consider the social responsibility involved with distributing that kind of product to so many people, and as a result they perpetuate not only the lowering of our country’s standards but also subtle forms of racism, sexism, and so on. God forbid they give the public something that makes them question their environment or values!

NEF: How did you make the change from story writing to film writing?

ROSE: I didn’t. I still consider short story writing to be my main concentration. But some ideas work better visually than others–some are completely visual–and they require a whole separate canvas. Despite the rather verbose inner monologue in "Bill" I believe in keeping film and literature separate. The only film adaptation that ever worked for me was "The Trial" by Orson Welles.

NEF: How did you get the idea for Bill?

ROSE: I thought the idea would resonate with my generation in some way. It is the age of divorced parents. A lot of people grow up frustrated with animosity toward their parents and the parents’ significant others. So this is a brief, quirky meditation on the situation of divorced parents.

NEF: Where is there a market for short film?

ROSE: In the U.K. and Australia there is more progressive market for short films. Also, the Internet has become a promising venue. AtomFilms recently picked-up "Bill." It is an extensive site with millions of dollars invested. They have connections with European markets, Cinemax, and HBO, and they’re putting out a DVD and home video compilation, which should get the proverbial ball rolling.

NEF: What did you learn about film in college?

ROSE: At Hampshire I learned that film was a language with syntax and tradition just like any of the fine arts. I studied Hollis Frampton and Bruce Conner and Andrei Tarkovsky, not Speilberg and Lucas. I definitely don’t think I could have gotten that perspective from UCLA or something.

NEF: Do you feel New England has influenced your career as a filmmaker?

ROSE: I love New England. Providence is very film-friendly but there is not much going on, except perhaps for that dreadful TV show. I’m moving to Boston but I’ll probably continue to shoot in Providence.

NEF: What festivals have you been in?

ROSE: The Palm Springs International Film Festival,the Rhode Island International, and the West Palm Beach Independent (where the film won the prize for "Best Fiction Film"). Later on, it will appear in the Seattle Bumbershoot festival, the Louisville Film and Video Festival, and the Northampton Film Festival.