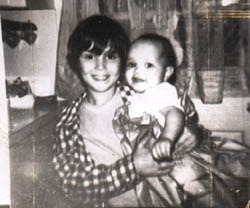 Have You Seen Andy?

Share
Filmmaker Melanie Perkins turns the camera inward for a film about the disappearance of her childhood friend, Andy.

"Everybody, all of us, filter the world through our own experiences," says filmmaker Melanie Perkins. It’s only fitting, then, that after ten years of working on documentaries for outlets ranging from "Nova" to "The American Experience," she has now focused the camera inward to examine one of the most traumatic events in her life. On Saturday, August 21, 1976, her childhood friend Andy Puglisi disappeared from a public swimming pool in South Lawrence. A police investigation turned up nothing, and he was never seen again. The case remains unsolved, but Melanie has never forgotten. Now, 23 years later, she is documenting her own search for answers regarding his disappearance.

"Have You Seen Andy?" is, by nature, a mystery, but such categorization proves inadequate. It’s a journey back to a summer day when a little boy disappeared and a little girl lost her childhood. That August, near a public swimming pool, innocence was lost. "This is a personal story of a childhood friend who survives this child’s abduction," she says. "And not just myself–other children who survive a child’s abduction and grow into adulthood, and how does that affect them? Do they remember their friend? I bet they do."

Andy’s disappearance, and the disturbing, unanswered questions it raised, meant he stayed with her forever. There was no sense of closure to their relationship. He didn’t fade from memory like a childhood friend who moves to a far away city and is slowly forgotten. He never had that chance. In memory, Andy remains a child. Ask Melanie why, after all these years, she’s reopening these old wounds, and she says, "It got to the point where I wasn’t able to sleep at night anymore without knowing. It got to the point that I wasn’t comfortable anymore not doing it."

Melanie arrived at her current role of independent documentarian after a decade of working the gamut of film positions, from PA to producer. This experience proved invaluable in its lessons regarding the more mundane, businesslike aspects of production. "I had worked for a lot of independent producers and, in a lot of ways, had been doing major parts of their business, whether it was renting office space and negotiating and purchasing equipment, or negotiating contracts."

Melanie Perkins at the age when Andy disappeared.

She also gained confidence and courage from the experience, which provided her a willingness to risk the difficulties of independent film production. "I realized that what I was doing for other people, I could certainly do for myself," she says. "I think a big part of that was realizing what it takes to do fund-raising, to raise your own money. Once I started to explore that, I felt more liberated in feeling that I was able to do this to a project that was personally important to me."

The benefits of working in the local film industry continue to play an important role in her work. Her crew consists of friends she’s worked with over the past ten years. She can also call on a network of mentors and colleagues willing to work on spec, volunteer advice, or simply offer encouragement.

There is an obvious special significance to the project that causes people to take immediate notice of the story. The concept of a filmmaker on a personal quest to find answers to the strange disappearance of a childhood friend is an immediate draw. "When I tell people the theme of the project, the concept, they’re typically very interested and want to help out," she says. "It makes people feel better to know, I think, that they’re doing something worthwhile, that has some social humanitarian significance."

When Melanie Perkins speaks of the film, she talks about the ultimate good it will produce. She talks about using it as a vehicle to promote awareness of missing children, to help teach parents how to protect children and to teach children to protect themselves. "I want it to be a film that can help people," she says. These are strangely optimistic conceits from someone whose childhood friend’s disappearance was accompanied by rumors of abduction, rape, and murder. One expects a harsher world view from someone who suffered through such a disturbing experience so early in life. Yet instead, Melanie focuses on what can be learned from the experience, and its inherent humanitarian value to others.

One more thing: When will it be finished? "When I have no more questions," she says.

If anyone has any information regarding the disappearance of Andy Puglisi, please send it to PO Box 156, Andover, MA 01810.