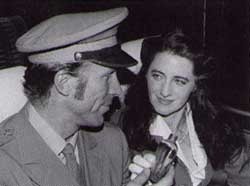 Woods Hole Features ‘Everybody Does It’

Imagine this: Immediately following college you decide to make a feature-length film. You wait tables to make time during the day to write the script. You scrimp and save every penny you earn for production costs. The film is what drives you–you eat, drink, and sleep it. After three years of stop and go, you have two completed reels in your hands. You spend another year shopping your film around to dozens of festivals, until you finally get the call: your entry has been accepted.

Boston-based filmmaker Marcella Hoekstra knows this story well enough–she’s lived it. "Everybody Does It," the writer-director’s first feature film, is enjoying a place in this year’s Woods Hole Film Festival, and it’s a superb example of the tenacity and determination necessary for one person to put together a feature film on her own. The reality of independent filmmaking, it seems, is as fantastic as anything Tom DeCillo whipped up in his film-about-filmmaking "Living In Oblivion."

Stories like Hoekstra’s are what make local film festivals shine. While they may not possess the media flash and glare of Cannes or the high-pressure, hard-sell marketplace of Sundance, they’ve got something more important–films made by people who care about film, and an audience of film lovers from their own community.

The Woods Hole Film Festival in Massachusetts, now in its eighth year, is one such festival. There are no prizes awarded here; the grand prize is having your film shown. Even as its popularity grows, the Woods Hole festival stays true to its focus on regional filmmakers and cinematographers and takes pride in showcasing home-grown films for the enjoyment of the local community. And each year they find enough of these films to maintain the original spirit of the festival. Festival producer Judy Laster readily admits the selection committee keeps an eye out for the new crop of up-and-coming raw talent: "We use the festival as a way to encourage people to continue doing what they’re doing."

Hoekstra doesn’t necessarily need any encouragement to keep going, but she certainly deserves it. She’s been pecking away at "Everybody Does It," a story about seven friends and their romantic travails, since her graduation from Rhode Island School of Design in 1994. From that moment, hers has been a truer-than-fiction independent filmmaker’s tale: Waiting tables for four years and saving $7,000 for the film. Living in a succession of low-rent apartments. Working on the film in fits and starts as time and money (but primarily money) allowed. Shooting for 18 days straight, with a three-person crew, sometimes with just three hours of sleep.

Hoekstra had no intention of financing this movie a la "Clerks." She wanted to avoid using credit cards to bankroll her production, and for the most part she succeeded–only film stock and developing costs were paid for with plastic. Everything else was cash up front. Hoekstra vividly recalls the stack of fives, tens, and twenties wrapped in a hair band she used to pay for her first print of the film.

It was clearly a struggle to get this film made, and Hoekstra’s willingness to let this struggle define her day-to-day life underscores her passion for making films. She sacrificed a lot for this movie–"Marcella, remember, you’re doing this for the film" became her mantra, uttered daily when she walked into her waitressing job and looked at her reflection in a mirror, wearing her yellow and white uniform. "You’re doing this for the film."

Fortunately, the adventure hasn’t all been uphill. Hoekstra has been duly impressed by the generosity of the local film community. Because it was summer and there were no other productions happening, she received a really good deal on her equipment rental (and I mean a really good deal–almost 70% off actual costs). Later, when she was having trouble securing a location for the party scene, one of her actresses volunteered a friend’s house in Jamaica Plain. The tenants gave Hoekstra a key and unlimited access to the house whenever she wanted or needed it.

Even now, Hoekstra is sometimes still surprised that she’s completed a full-length film. "I was just some 22-year-old kid out of art school, saving every penny, not going out, getting skinny–literally, the starving artist thing." However, she’s learned a lot about the filmmaking process, and the first-time experience is not one she seems willing to repeat: "For the next film, I’m trying to find some funding. I know it’s out there, and I’m going to get it."

Filmmakers like Hoekstra underscore the importance of local film festivals. "You never know how someone’s going to mature," says Judy Laster, "so if you don’t encourage them in the beginning, who knows what you’re going to miss."

The Woods Hole Film Festival runs from July 31 through August 7, 1999, with screenings and events held in Woods Hole and North Falmouth, MA. For more information about tickets and showtimes, visit the festival’s web site at http://www.woodshole.com/filmfest/index.htm.