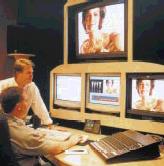 1999 is proving to be a banner year for Tewksbury, MA-based AVID technology. In March, the company received an Academy Award in the Science and Technology category for its Film Composer for Editing. Then came the industry-wide buzz around its stellar showing at the 1999 National Association of Broadcasters in April. The company introduced a range of new and newly improved technology at the event, including the Avid ShowBiz Producer and the Avid Symphony Version 2.0, two breakthrough editing products at opposite ends of the price spectrum.

The ShowBiz Producer gives low-budget video editors and producers cause for excitement, because it offers a complete DV editing system for the Windows NT platform for less than $10,000. Whether editors are working in video or multimedia, the system offers powerful features and functionality never delivered before at such a low price. In addition, Avid and IBM have joined forces to sell the system as part of a turnkey solution that will include Avid editing software, a 1394 DV capture card, IBM’s award-winning IntelliStation workstation, IBM monitor, and storage.

According to Ned Hazen, senior vice president and general manager at Avid, "The market has been waiting for a DV editing system that enables creative professionals with modest production budgets to easily create high-quality video. By combining the power of Avid video editing with IBM’s leading platform technology, we will empower organizations with the ability to easily harness this powerful new medium and achieve significant benefits."

With the Avid ShowBiz Producer, editors can take advantage of DV25 technology for easy editing and capture capabilities, crisp image quality, and DAT quality audio. It also eliminates the need for a separate application for capture and playback; users can simply plug their cameras into a port and be ready to go.

Other great features of the system include precise time-code editing; real-time mix and monitor of up to eight audio tracks; real-time audio EQ; and the ability to render digital effects such as dissolves, wipes, color correction, 2D picture-in-picture, titles, and support for third-party plug-ins.

For editors working in the high-end and prime-time television market–and who happen to have an extra $130,000 to invest–there’s the Avid Symphony Version 2.0.

Steve Bayes, senior product designer at Avid and author of "The Avid Handbook," explains. "For $130,000, Symphony lets you do real-time uncompressed editing, something you couldn’t do up until last year. Now you don’t have to deal with quality loss due to compression."

In techno-speak, Symphony allows editors to manipulate uncompressed ITUR-601 streams in real time. It includes a new dual-stream, real-time ten-bit color correction engine, providing an unprecedented level of control. It also allows editors to color correct globally, scene to scene, or intraframe, as well as work with eyedroppers, sliders and curves, all within the familiar Avid interface. And because Symphony also features Safe Color, editors can easily identify colors that do not meet broadcast standards.

Another new addition to the Symphony line, the Symphony Universal Model, helps editors deal with the challenge of producing multi-format, multi-version content. Priced at $160,000, this new model has all the capabilities of Symphony 2.0, as well as Avid’s 24-frame progressive universal editing and mastering technology. With the push of a button, users can edit 24-frame progressive content in its native format and deliver NTSC, PAL 4:3, and letterbox formats. It also outputs list formats such as film cut lists and 24 fps Edit Decision Lists (EDLs) for HD conforming.

And although the Symphony lines carries a hefty price tag, Steve Bayes believes it’s an investment that can pay off for both editors and their customers. "Editors using the system can charge more per hour because it’s a much more advanced system than other Avid models with professional-quality finishing. Basically, you can tape right off the Symphony and use it for broadcast–it’s that good," Bayes explains. "As for customers, they get exactly the edit that was done in offline, at a lower per-hour rate than at an on-line editing session."

Avid plans to ship Symphony Version 2.0 in Q3 1999, while the ShowBiz Producer will be on the market in the Fall. For more information on the latest AVID technology and news, visit www.avid.com.