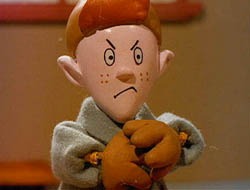 Inside the Olive Jar

Share
Go behind-the-scenes of one of Boston's premier animation studios.

Remember the early days of MTV, with its dozens of claymation ID spots? Did you ever wonder who comes up with that stuff and think, "Wouldn’t it be great to do that?" Welcome to the Olive Jar Studios. Located in Boston, Olive Jar is a premier animation studio specializing in all things animated. Beyond standard two-dimensional and three-dimensional animation techniques, Olive Jar blends mixed media, CG (Computer Generated), stop-motion, cel, drawn, cut-out, pixilation, and live action, making it a unique one-stop shop that transcends the limits of traditional filmmaking.

The reel is a culmination of years of unfettered creativity and energy. A combination of original productions, familiar and foreign language ad spots, a brilliant anti-smoking PSA, and an MTV logo or two, the reel set just the right tone for a fascinating tour inside the Olive Jar.

Imagine if Bill Gates and Tim Burton lived and worked together, and you’ll get a sense of what it’s like to tour the Olive Jar Studios. Enter through the front and you feel as if you’re in an avant-garde theater with black walls and huge, thin sheets of glass decorating the warehouse-sized room. To the left of the room, on stage, is a large meeting table, appropriately adorned with Clio awards and dual monitors for screenings and pitches. To the right is a small office-lined corridor. On our way down the corridor, Charde explains the history of the company.

A few words from our tour guide…

"Olive Jar was founded in 1984, but the company that is today has really existed since about 1992. The two original partners were Mark D’Olivera and Bill Jarco. Bill had won a student Oscar and caught the eye of MTV, which was then the fledgling new station. We did about 40 or so clay logos for them. We were in a garage in Brookline doing primarily clay. In the early ’90s, Bill and Mark left.

"Fred MacDonald, who is our creative director, along with Larry Pensack and I–I came a little bit later–basically reshaped the business to be an animation and special effects production company, not just doing clay, but doing drawing and stop motion.

"Over the past two years, we have added computers and mixed media, but actually taking all the forms of animation and using them as tools to make a look.

"Someone will come to us with an image or an idea and ask, "How will you make it happen?" We can go into our collection of skills and disciplines in animation and make it happen. So that’s how the business had evolved. We moved in here about six years ago."

Where it all happens…

At the end of the corridor are three nondescript doors. This, however, is where the fun begins. Behind Door #1 is a small room filled with Media 100s and Avid systems with editors busily creating what could very well be Olive Jar’s next award-winning production. (Recent awards include Clios in 1997 and 1998; a Top Spot Anicom Award; World Animation Celebration Gold Awards for Best PSA and Show Reel; New York and Chicago FIlm Festival Achievement Awards; six Broadcast Design and five Telly Awards.)

Skipping over the door leading to the studio (there’s a shoot in progress for a popular jeans company), Charde opens Door #3 and steps into a dark room with a bare wall to the left and banks of computer equipment and monitors along the right wall. Here, computer animation specialist Kristian Carey is putting the finishing touches on a commercial starring a familiar face, the Pillsbury Doughboy. Carey describes how the Doughboy’s likeness is created in the computer in the form of plot points along a 3D grid. The green stick outline is his skeleton. With the click of a button, the Doughboy fills out into the familiar pudgy icon.

Each movement of the Doughboy is a mathematical calculation to be entered into the computer and rendered. "If he lifts his arm like this," Carey says, lifting his arm straight up, "what happens to the rest of the muscles in his body?" The line between creative talent and computer mastery that Olive Jar animators display is impressive. Which comes first, the chicken or the egg? Off to the studio.

Back inside the corridor, Charde opens the door and checks that it is okay to show off the studio. It is a large studio full of staff, lights, flags, stands, and freelancers with a familiar "hurry up and wait" look on their faces. Hanging by a thread, inches from the tar roof, hangs the DP with a 35mm camera focusing down on a set for a stop-motion jeans commercial. "This is a ten-day shoot for him," Charde says, looking up at the sweating cameraman.

The set, of course, was designed and built by Olive Jar staff in the design rooms adjoining the studio itself. Olive Jar has an impressive collection of movie-making memorabilia from bygone days, all of which the company still uses. An old dolly from the 50’s sits in a corner. "We use that as a tripod," says Charde.

Tucked away in a corner of a large adjoining machine shop is the workshop of Ted Sydor, a machinist who apprenticed in New York at the Jim Henson Studio. Ted makes the metal armature for the puppets used in Olive Jar’s stop-motion productions. "There are very few people in the world that still do this by hand," says Charde.

Winding our way back to the front of the building, we enter what looks like a high school art room. Here a sculptor is molding the form of a human hand over metal armature built earlier by Ted Sydor. Later, the form will be cast, and a rubbery, more pliable clone will be painted and used in a commercial.

Our final stop is the large pressroom-like home of the animators. Although few are there (a project recently wrapped, and they are on a well-deserved break), the drawings on their desks and walls are a sobering testament to the full range of creative talent inside the Olive Jar. "You can learn the computer part," Charde says. "This, you’re born with."

Charde’s words sum up what is at the core of Olive Jar’s success. The employees here, like most filmmakers, share a love and curiosity for filmmaking that can’t be learned. With it, they have managed to combine critical acclaim, business savvy, and technical excellence.

"It must be great to come to work," I say to the person who showed me out. Need I tell you his reply?

For more information on the Olive Jar Studios, call their publicist Susan Barrett at 508-785-1829.