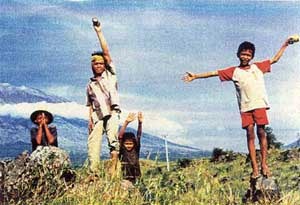 LF: What is unique about what the people at Documentary Educational Resources do?

CLOSE: Our concentration is on ethnographic documentary filmmaking, documentaries with a uniquely anthropological perspective.  We look for ways to support a whole young generation of filmmakers interested in the kind of filmmaking that could be used for social good.  For a large part, these filmmakers have a very cultural background themselves, and they’re interested in exploring cultures. And these are [young people] who are considering possibly a film career but don’t know how to fit it in, how to combine academic interests in other cultures with film. They come to us.

LF: What is your submission process? How do people propose ideas to you, and how do you choose your projects?

CLOSE: It’s very informal. We get a lot of queries, people contact us by word-of-mouth. They hear about us or they’re online or they know some of our filmmakers. Some of our filmmakers are academic and working in the field and as part of their research, they produce a film. Some of it is more professional, some is less professional; some geared to educational TV audiences, some designed for the classroom. There’s a range of production levels here, and there’s a range of projects for different levels of production. We evaluate projects on a case-by-case basis. There are a number of factors involved as to whether we can involve ourselves or not.

In choosing projects, we’re limited by the amount of resources we have–personnel, staff, time. But we manage to cover a lot of ground. We’ve worked with a number of locals, like Nick Kurzon’s project "Sight Unseen," [his film "Super Chief" recently won the documentary award at the New England Film & Video Festival]. Nick did the original editing here; he learned how to edit on the Avid. He did a lot of his own editing and fine cuts and actually sold the program to HBO for broadcast, and we’re negotiating with him for the educational aspects.

LF: Did you help him with that? Do you do the marketing as well?

CLOSE: Actually, Nick did that on his own. If we already have a signed contract and we felt a program was broadcast quality, we would help with the marketing, try to get things to HBO, Discovery. And then of course there’s a host of programmers who actually pay for these kinds of projects. There are several broadcast outlets.

LF: What’s in the works?

CLOSE: Another project is just at the fund-raising stage, and it’s a biggie. It’s a collaborative effort between us and Ched Angier Productions. They’re local; they produce "Scientific American Frontiers" on PBS with Alan Alda… We’re developing with them a project called "Dispatches from America."  It’s slated to be for PBS on America’s subcultures, and that will take on a kind of anthropological feedback on America itself. We’re pushing around names for a host.
Right now we have two really big projects and about four or five smaller projects in production. The big things have to be fund-raised for… Then some of the smaller projects, it’s real nickel-and-dime, where we serve food and give them programs and do mailings and art clips and get checks from individuals, from 25 bucks to $2,000. And whatever we can’t raise, we try to support with in-kind help without charging the fee, whatever we can do.

LF: I’ve heard interest in the documentary, from the filmmakers’ perspective, has dropped off. Can you comment on your view of that?

CLOSE: From what I see, I think the documentary is, on a certain level, exploding! But it’s this weird melding of real TV and the desire to really experience life… There are tons of film festivals, and plenty of festivals with academic pursuits sponsored by universities. I don’t think there’s any lack of outlet for this kind of material. What there is, is a lack of is funding. I mean, nobody’s going to get rich doing this. It’s much more closely aligned with artistic freedom and expression. It’s the kind of commitment that artists have. But there is a way to do your work and pay for your work. There are certainly more resources than there were just a few years ago. But there are plenty of people doing this work here in Boston. It’s great, fertile ground for documentary.
Ultimately, we hope to provide a vehicle for young people who might be just coming to the end of their student days, showing them that there is a way you can combine educational media with an ethical approach that will help to increase social understanding through film.