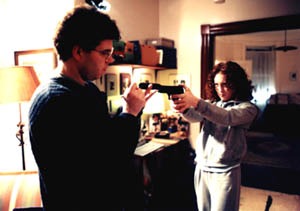 Share
Richard Moos breaks from the edit room of 'Orphan' to discuss the economics of indie film & doing it all.

Richard Moos is discussing the relationship between film and economics. "Ninety-five percent of filmmaking is trying to chase down financing. Five percent is creating something," says the president of the Boston-based Cathartic FilmWorks, who is also a director, producer, cinematographer, and editor. "You have to do a film that makes sense on a business level as well as an artistic level." He points to his most current project, "Orphan," as an example of fiscally responsible filmmaking, where business is viewed as simply another component of the filmmaking process, along with editing, writing, and shooting.

The film, currently in a rough edit, is a tale of redemption and revenge. It involves the transformation of an Irish hitman, Jake McCrory, who, in a near-death experience, learns that he must protect the orphaned daughter of a man he has killed earlier in the film. Upon returning to his body, Jake surrenders to the witness protection program and devotes himself to aiding the young girl, now living with an abusive uncle. The girl vows revenge on the man who killed her father. Ten years pass, and eventually, the hitman’s true identity is revealed.

When early attempts at financing failed, the filmmaker soon envisioned the film in a "guerrilla scenario, with me, a shooter, an actor, and my producers running around, stealing locations, doing it sort of ‘Laws of Gravity’ style in a week," says Moos. "The intent was getting something in the can for $30,000."

"Orphan" actually cost less than that early estimate ($24,000–roughly the same cost of a "day of craft services on a feature," says Moos). Costs were kept low through conventional independent filmmaking means: cast and crew worked on deferred salaries; locations were donated by friends and family; etc.

Yet, he’s also able to pull off a level of professionalism by being involved in every aspect of the production. Moos has worked in almost every facet of film production over the past decade, including documentaries, shorts, corporate work, and features. Recently, he was the cinematographer and editor of the Boston-based indie "Squeeze." "It made sense as an independent to learn how to do everything yourself," says Moos. "’Orphan’ is what it is because of the work that I’ve done over the past ten years."

Moos’ own experience is complemented his core production team. Screenwriter/producer Thomas Murtagh has written 21 feature-length screenplays, including "Torn Asunder," which was sold to MGM. Co-producers Shawna Moos, Rob Morgan, and Jay Frasco all have comprehensive backgrounds in film production. Director of Photography T.W. Li has had dozens of short films shown in festivals, and has worked on ten feature films.

The production team’s amassed film experience and local contacts proved invaluable as "Orphan" went into production. In contrast to the proverbial skeleton crew often associated with independent filmmaking, "Orphan’s" set was occupied by anywhere from 30 to 50 volunteer crew members at any given moment of the 18-day shoot. "Everyone really ended up giving everything that they had," says Moos. "This film is a testament to those people."

Locations were rarely secured early enough to develop storyboards or practical shot lists. Decisions were often made spontaneously on set, just prior to shooting. Sometimes the production was limited not by stylistic concerns, but by time constraints, such as when the keys to the grip truck disappeared and the set was forced to shut down for five hours, or when the cast and crew plowed through 11 pages of script in one day.

Yet, from this chaos, the movie developed an identity. "You are engaged in something that is alive when all those elements and people come together to create that moment," says Moos. "The process of creation is alive and in that moment on the set."

Although Moos hopes "Orphan" will eventually find a distributor via the festival route, he has far greater plans for the film, and those local filmmakers who helped him. His ultimate goal is to make Cathartic FilmWorks a "self-financing, self-producing entity. ‘Orphan’ is a template, a springboard to facilitate all those other filmmakers’ projects."