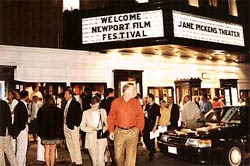 Share
RI brings a rich assortment of films this summer in a variety of fests for all ages & types.

If you build it, they will come, or so hopes Christine Schomer, founder and executive director of the Newport International Film Festival, who, armed with a picture postcard of historic Newport, went to Sundance in 1997 to lure filmmakers east. This summer, with the picturesque city of Newport as its backdrop, the Second Annual Newport International Film Festival kicks off the summer festival season, June 1-6. The festival opens with the film that marked the end of this year’s Cannes Film Festival, Oliver Parker’s adaptation of Oscar Wilde’s "An Ideal Husband," starring Rupert Everett, Julianne Moore, Cate Blanchett, and Minnie Driver.

With an eye for bringing audiences high-quality films they could not see otherwise, this year’s programmers will feature ten documentaries and ten narrative features solicited from around the world for competition. An American sampling includes Rory Kennedy’s "American Hollow," about a family of 13 in the rural South, Eric Mendelson’s "Judy Berlin," starring Madeline Kahn and Julie Kavner, and "Big Brass Ring," the production of a 1982 Orson Welles script starring William Hurt and Miranda Richardson.

Also on tap is an outdoor premiere screening of the newly restored Billy Wilder classic "Some Like It Hot" at the beautiful International Tennis Hall of Fame, and a comedy retrospective featuring seven of Bill Murray’s films, from "Caddyshack" to "Rushmore."

Already famous worldwide for its jazz festival, Newport is celebrated for its musical heritage in the Jazz Sidebar, a collection of films with a jazz theme. This year the Jazz Sidebar will feature "Stormy Weather," "Anatomy of a Murder," a feature film about legendary jazz cornetist Bix Beiderbecke, and 1990 Cannes Film Festival selection "Memories of Duke."

"It’s a great time," says program director Maude Chilton of the festival. "From the filmmakers’ point of view, it is very central, so they can see each other at the venues or events. From the audience’s perspective, it is very accessible. You never feel like you’re missing anything," she adds.

This summer marks the first time the New England Screenwriters Conference is being held in conjunction with the Providence/Rhode Island Film Festival (see below). And rightly so, says conference director Rob Hoffman. "It all begins with the written word." The three-day conference, according to Hoffman, recognizes that the screenwriter is the genesis of the feature film.

Modeled on the successful Austin Heart Screenwriters Conference, the New England conference features a competition of scripts from around the world and a series of both panel and one-on-one discussions with nationally recognized film and television writers and producers. Unique to this conference, a scene from this year’s winning script will be produced and screened at the end of the Providence/Rhode Island Film Festival. According to festival organizers, director Robert Downey, Sr., and Oscar winner Tom Ohanian, senior editor at AVID Corporation, have agreed to assist.

Attendees will have an opportunity to meet and talk with celebrated writers such as "On Golden Pond" screenwriter Ernest Thompson, Rhode Island-based writer/director Don Mays, David Gerrod, and D.C. Fontana, whose credits include "Star Trek" and "Bonanza." Other guest speakers include Anne Marie Gillman, COO of Morgan Freeman’s production company Revelations Entertainment, and Laura Berneiri, producer of "Next Stop Wonderland."

The Third Annual Providence/Rhode Island Film Festival will be held at six venues in Providence, as well as locations throughout the state, from August 11-15. This is the same festival that last year hosted the New England premiere of the Farrelly brothers’ blockbuster hit "There’s Something About Mary."

The festival, still in its call-for-entries phase, will feature entries from more than 14 countries and is sure to be a summer favorite for film lovers.

Opening-night festivities will feature a gala fund-raising event to benefit the Hasbro Children’s Hospital and a premiere screening at the Veterans Memorial Auditorium. "Our long-term goal," says festival president George Marshall, "will always be benefiting someone else with us."

It is with this unique community spirit that Marshall and festival organizers have planned this event, all the way down to hosting a videofest of last year’s winning films at ten public libraries throughout the state.

In addition to the 65-plus screenings, this year’s celebration will also include a Secret Cinema event Friday, August 13, at the Assembly Theatre in nearby Harrisville, RI. The newly restored 1920s-style theater will play host to a "major film premiere," Marshall says, after which the audience can enjoy a true Rhode Island-style cookout with all-you-can-eat chicken and pasta. Buses will shuttle festival-goers from Providence.

Activities for filmmakers include a bus tour around the state for filmmakers and location scouts, a cruise on the sloop "Providence," and morning networking breakfasts. "We want to make the filmmaking community feel welcome and to make our resource their first resource. Our thing is to really promote filmmakers and filmmaking," says George Marshall.

On Sunday, August 15, there will be an awards luncheon and a final gala, featuring multiple screenings and a swing party at the Heartbreak Hotel. Organizers will follow up the festival with a week-long tribute to the festival’s prize-winning films, called the Best of Fest.

The Third Annual Providence/Rhode Island Film Festival is not lacking in activities for children. With its Kids Eye program, staff and students from surrounding Rhode Island film schools will teach kids ages five through 15 how to make movies. This event, inspired by Steven Spielberg, will tie in to the Convergence Arts Festival in June, hosted by the festival’s parent organization, Flickers.

"This is a true statewide event," says Marshall, aimed at educating people how to be film friendly. For more information, contact the Providence/Rhode Island Film Festival at 401-847-7590.

Other RI Festivals Worth Noting