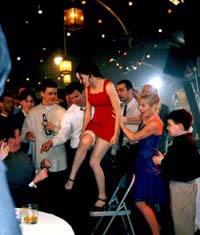 "I saw a lot of truth in the film," Wahlberg said recently during an interview at the Lenox Hotel. "I liked the part of this character that wanted to take care of people and help people. I know what that weight feels like, so I knew that would help me do a solid job in the film."

The events in "Southie" were hauntingly familiar to Wahlberg. He grew up in a large, supportive family in the working-class neighborhood of Dorchester, MA, not far from South Boston but very separate. After touring and gaining fame as a member of New Kids on the Block for seven years, the story behind "Southie" is one to which Wahlberg could relate.

For Quinn, to return to the problems in his family after so much time away is difficult. His sister, Kathy, is on a collision course to self-annihilation through her alcohol abuse. McGowan plays the role with heartbreaking intensity.

"I had actually done two movies with Ben Affleck ("Going All the Way" and "Phantoms") back to back," McGowan explained. "When I came off of that, I did this, and I think it was a reaction to a big special-effects thing that didn’t have a lot of heart. I know what I’m capable of doing as an actor; I just haven’t had the opportunities yet. I try not to be trapped by the thought that people only like me in one or two roles."

In the past, McGowan has appeared in teen and "bad girl" roles ("Scream" and "Jawbreaker"). This role in "Southie" allowed her to stretch her acting muscles. Her character Kathy is extremely conflicted and succumbing to the depths of alcohol addiction.

"This is all from Danny’s perspective," McGowan explained. "I’m where he’s come from, I’m what he fought to get away from, and I’m a walking reminder of one misstep and you’re going to be here. That’s why she has trouble with him."

South Boston is often referred to as the "most dangerous neighborhood in America" and the "last white ghetto." When McGowan, who had never been to Boston, told others in Los Angeles that she was doing a film in South Boston, they expressed concern.

"South Boston has a myth about it," Wahlberg elaborated. "It is a sheltered place with walls of whatever it is known for–good or bad. Not many people get inside."

The story behind the making of "Southie" is compelling. In 1993, a struggling actor named James Cummings ("Ed’s Next Move," "Swoon") finished the first draft of a screenplay he called "The Brass Ring." A native of South Boston, Cummings wrote about some of his own experiences.

"I had the gift of aspiration instead of desperation," Cummings said. "I wrote down what I thought. For me, my father died when I was 12 years old, and there are a lot of questions that have been unanswered. There are a lot of things I don’t know. These are things I can describe and put on paper. It’s an every-single-day thing, and this movie was based on love, and that’s it."

The script reached actor and Springfield, MA, native John Shea ("Missing," "Stealing Home," and television’s "Lois and Clark"). Shea and Cummings rewrote the screenplay, and Shea came on board as director. "Southie" was the first film to shoot in South Boston ("Good Will Hunting" completed production afterward, although it was released earlier).

"It was set in a world that I had never seen done on film before. There was nothing ever set in South Boston," Shea explained. "Thematically I thought I could bring things to it that I had been exploring–particularly this Irish-American tribalism. There was something about this script that had a ring of truth in it. It is written from the inside out. It is different and heartfelt."

There is so much emotion and raw energy in "Southie." There is no doubt that audiences outside of Massachusetts will emphasize with some aspects of "Southie," a film about authentic characters with routine struggles and which draws on the strength of a community to drive the storyline and messages deep into the soul.

"It’s a movie about hope, but in a realistic way," Wahlberg emphasized. "Most people can’t hope for the stuff they see in a Hollywood movie. You can hope that you can work things out on an everyday basis with your family. You can hope you can have better relationships with people and strive for better things in a realistic way–to better yourself, to try to do something good, to make good choices. That is kind of simple, but people can relate to that."