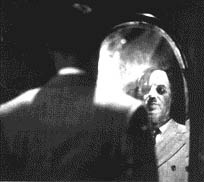 Share
A review of 'The Empty Mirror'.
Barry J. Hershey’s first full-length feature, "The Empty Mirror," takes place in a fantastical non-time parallel to Hitler’s last days in his bunker in 1945. The story jumps off from an image that intrigued Boston-based Hershey: Hitler watching images of himself on film. What would he make of his life? How would he place himself in history? And, most interesting to Hershey, how would Hitler reconcile the icon of Hitler as German savior with the reality of millions killed, and the ultimate destruction and defeat of what he called the Motherland? To watch this film is to get inside Hitler’s mind, to learn how he created the Hitler Myth, and to watch the icon ultimately crumble.

The Hitler of "The Empty Mirror," as portrayed compellingly by Norman Rodway, is a control freak, the tyrannical director of a movie that would eventually engulf the world and redefine evil for the 20th century. To the accompaniment of continuously projected archival films–the Nazi uber-propaganda of Leni Riefenstahl’s "Triumph of the Will," battle footage from the Russian front, Eva Braun’s home movies–Hitler soliloquizes while a typist (Doug McKeon) records his words for posterity, and is visited by Eva Braun (Camilla Soeberg), Josef Goebbels (Joel Grey), Hermann Goehring (Glenn Shaddix), and Sigmund Freud (Peter Michael Goetz), with whom he discusses his beliefs and ideas. And although these visitations exist only in his increasing dementia, Hitler bullies, blusters, chastises, and, in the case of Braun, confesses almost romantic feelings. But Hershey’s point here is not to make Hitler less of a demon, but to show that he was a man–a man with tremendous invention for evil, but a man nonetheless–and to understand the roots of frenzied nationalism. In this way, one hopes, history will never repeat itself.

There is an inherent paradox which comes to the fore in "The Empty Mirror": in order to learn from what Hitler did, one must study him; but in studying Hitler, one by definition propagates his legacy, ensuring that he will be remembered. As Hitler says, his goal is "to create a perfect reality that will live on forever. Nothing is more important to me than the preservation of these images." In order to prevent other Hitlers, we must perversely fulfill his wishes.

But these images are a lie, and "The Empty Mirror" focuses primarily on the fiction Hitler created through his use of propaganda in his speeches and in pamphlets, in films such as "Triumph of the Will," and through rallies and other Nazi actions he categorizes as "opera," referring to the nationalism, grandeur, and spectacle of Richard Wagner’s works. Over the course of the film, as happened during the final years of World War II, Hitler’s fiction begins to crack, and Hitler the Icon becomes Hitler the man, revealing someone afraid of losing control. Images of alluring blonde sirens, of athletic feats, of hundreds of thousands of enraptured participants in Nazi rallies–all constructs of Hitler and his Minister of Propaganda, Goebbels–give way to the sickening, horrific reality of the concentration camps. In the end, Hitler realizes that he, too, had been taken in by the Myth, and he seeks solace by frantically attempting to enter the fiction one last time to escape the impending reality looming outside his bunker.

"The Empty Mirror" takes place entirely within the bunker, and director of photography Frederick Elmes (ASC) and visual effects supervisor David D. Johnson do a wonderful job creating a swirling, ever-shifting world in which the only reality, ironically, is the artificial reality of the films themselves. What we see are Hitler’s delusional fantasies come to life. The bunker is Hitler’s mind, a fortress against the truth, conscience, and reason.

At times "The Empty Mirror" feels like a history lecture, crammed with quote after quote, a daunting torrent of information, but even then its lessons are well worth learning, for the history of the tyrant–rampant with manipulation and terror–is unfortunately never dead. All we can hope to do is recognize it earlier, and deal with it better than we have in the past.