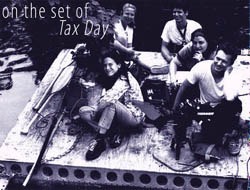 Share
A review of 'Tax Day'.
Rhode Island local and Harvard grad Laura Colella’s "Tax Day," an almost budgetless indie film, tells the story of one–you guessed it–April 15 in the life of two 40-something women wending their way through Providence, RI, to mail a tax return. Irene and Paula, played with an odd combination of aloofness and vivacity by Kathleen Monteleone and Donna Sorbello respectively, enjoy the beautiful spring day and the people, sights, and sounds they encounter.

From the beginning, "Tax Day" is really two separate films shoehorned together. The first deals with women in their 40s who are attractive and independent-thinking. We know they are attractive and independent-thinking because they smoke marijuana; have done ‘shrooms; want young men for sex, but not a relationship; have no visible means of support; live in an alterna-Providence where every younger man finds them attractive and hits on them; and get things from these same men for free by possessing the Seinfeldian Kevorka, the mystical Life Force. The second film presents Providence as one big circus, full of breakdancers, hooky-playing gymnasts, acrobats, and a young boy who repeatedly charges down a grassy hill directly into a large oak just for kicks. This dichotomy leads to a Jekyll-and-Hyde journey that works in parts.

There are a couple of stand-out scenes. In the first, Rose (Rose Giuliano), who looks to be in her 80s, calls down to Irene and Paula from her apartment window. They go up, and are regaled with odd tales and family history, told in the straightforward fashion of stories that have been oft repeated. She also wants her photograph taken to send to "that TV weatherman," telling the skeptical duo that she will soon be 100 years old. The scene is sad, funny, and off-kilter, and gives in to neither pathos nor zaniness. In another, a fruit vendor tries to convince the two women that his wares are the freshest in town. The actor, Angelo DiMascio, Jr., does a very nice job in this small role, and is the most natural actor in "Tax Day." On the other hand, two scenes–one at a yuppie yard sale (in which marriage is slagged for the first of several times), and another with two slacker teen girls–are overdone, full of stereotypes instead of actual characters.

As it turns out, the true stars of "Tax Day" are the director of photography, Richard Rutkowski, and the sound crew. Shot on an extremely limited budget, the movie looks and sounds great. The colors are vibrant and crisp, the lighting clean. The camerawork is steady, the shot choice inventive. Some may argue that an independent film should look more "hands on," more rough-hewn, but here the story doesn’t call for that sort of gritty realism, and the look really matches the subject. As for the sound, the music complements the action nicely, with the group Mother Jefferson providing a catchy musical interlude. Exemplifying the care taken with the soundtrack is a scene where Paula and Irene are passed by a group of teenage boys on their highly detailed low rider bicycles (we’re talking serious chrome here). Irene’s humming of a slow tune is gradually taken over by a Latin rhythm as the camera leaves the two women to admire the boys’ handiwork. For a moment, the humming and back beat form one song, until gradually the beat of the street takes over. Subtle, and very nice.

Unfortunately, the screenplay is not always as subtle. Colella and her (unpaid!) cast and crew certainly deserve accolades for "Tax Day"; they obviously put a lot of heart into it.  As a contrast to so many movies in which younger women are attracted to older men, Colella’s attempt to do the reverse should be heartily applauded, but here it feels forced, since neither woman has a particularly distinctive personality.

This lack of character development could have been avoided, but the fundamental shape of the film would have to be changed. If the women are indeed an integral part of the film, then there should be a development of their story, more than just two women walking through the city seeing things. If the women aren’t really so important, and they are only a means for the audience to see the people and sights of Providence, then the conduit characters could be totally left out, or perhaps replaced by two children, who could really marvel at all of the wonders around them. To children, many things can seem magical, since often they are seeing things for the first time. But for these two 40-something women to be enchanted by everything–and, on a related note, for all of Providence to be one big circus on a workday in early spring–doesn’t ring true. Unless the whole thing is meant to be magical realism, in which case the film could be even more magical than it is.