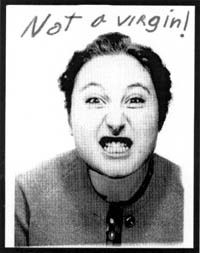 Share
Irena Fayngold's first foray into filmmaking outlines the female-unfriendly path from the batter's box to home plate.
"Getting To Homebase: The All-American Pastime," Irena Fayngold’s first foray into filmmaking, centers on the often awkward and sometimes humorous experiences of a young woman’s sexual awakening. Shot on Hi-8, the video employs an appropriately intimate concept: it is one continuous, 11-minute close-up of the artist’s hands displaying personal photos, drawing sketches, and outlining the female-unfriendly path from the batter’s box to home plate.

In an interview as revealing and personal as the video itself, Fayngold discusses the birds and the bees of her video’s message, the drawbacks of short films, and the importance of creating a character even in an autobiographical piece.

LF: What made you decide to do this film?

FAYNGOLD: I just had to do it. There were things I had to explore on my own about what happened to me within my early sexual experiences. I felt very compelled, but I was also frightened. It’s very revealing and very personal. I first saw a visiting artist come to the Museum School… [S]he did some pieces that involved pornography in her work, and her work wasn’t personal. It was about women’s experience with sex, and it was about issues of power and rape and subservience within sex, and her work was very angry and full of rhetoric and generalized feminist theory. Although I agreed with her theory and her ideas, I felt she was taking an approach that turned people off… I realized that if I wanted to communicate my work to people that I would have to not bang them over the head with a theory, but I would have to invite them in to share my own story. That’s when I decided I would have to just focus on my own personal experiences… So I told my own story, the idea being that this isn’t just something unique that happened to me; it’s something that we all share. I was hoping a lot of people would connect with various aspects of the experience.

LF: How did the concept of your continuous close-up on your hands come about?

FAYNGOLD: I used to be a painter, and when I painted I would start with drawings, sketches. I’d have a whole lot of sketches before I actually began to do the painting. Now I was doing video, and I sat down and thought, How do I develop a piece? How do I do sketches, how do I start something and develop it into something finished? I didn’t know, so I decided to do my version of a sketchbook on video. I wanted to use my personal stories as my palette of paints to choose from and then develop a piece. I thought, well, I’ll videotape myself trying to remember these stories, and that videotape that I make will be my sketchbook that I then use to make a finished piece. I turned the camera on and used the photos to help me remember, and took a pad and starting writing down the dates and the times and names of people. It was about half an hour long, and I only got to third base! [laughs] The reason I was able to do it was because I knew NO ONE was going to see this, right? I mean this was my SKETCHBOOK. Well, I asked my professor, "So which of these stories do you think is compelling?" I thought I would shoot footage. I didn’t think you could be that straightforward; I thought you had to be artsy about it. But she thought I was showing her a finished piece! I said, "No! No! I can’t possibly do this! This is just me talking; it’s so naked." We made a deal. She said, "Okay, you don’t have to show it to the class, but why don’t you just work on it a little more, get it shorter? I want to see it put together. Just lower your camera angle a little bit, make sure the photos are in the frame more." So I did it for her.

LF: Did you use a script? It’s an 11-minute monologue, really.

FAYNGOLD: I spent a whole weekend, and I must have done it about ten times. I never had a script. I would watch the videos over and over, and I’d notice which things were funny and which things weren’t and which things worked, and I sort of developed a rap. By the end, I knew exactly what I wanted from all the other takes, so I wrote down not a script, but I wrote down the order, an outline, so I could sneak down and say, "Okay, that’s next." By the time I had finished it, and by the time I showed it to the professor, I felt a little more comfortable, and I could see that she was right; it was more powerful this way.

LF: "Homebase" has screened in festivals and classrooms from New England to New York. It looks like you’ve made the rounds. Do you plan on doing some other festivals outside the area? Any financial help paying festival fees, etc.?

FAYNGOLD: The thing that I pursued and stopped for a little while, but I think I’ll pursue again: I want to get this distributed through a sex education distributor. That’s the next thing I really want to push this through, and then I’ll let it rest for a while. I didn’t get any funding for it at all. I did it while I was in school. One festival paid me very handsomely for it. It didn’t cost anything to make [since] there were no props, no actors, no production costs. I got paid every time it got shown in a classroom. I’m definitely in the black if you don’t count the fact that it cost tuition to make it.

LF: What has your experience been in distributing a short film?

FAYNGOLD: I worked briefly on a sequel to "Getting to Homebase" that would be about female ejaculation. But I made a decision not to do short, artsy work for now, because the return is so little based on how much you put into it. I’ve done other short pieces that I’ve shown through Video Space, a local collaborative that shows video art, usually at Mobius (617-542-7416). They have screenings maybe once every two months, and they were so supportive of my work while I was at school. I knew that I could always get a video I made into a screening, and that was such a great opportunity for me, to know the work you make will be shown, and to be there with an audience when they see it. And now there’s more venues, like the Jamaica Plain Underground Film Revolution at the Midway Cafe. But I’ve made a very conscious decision to not do any more short art pieces. I’m now working as an editor in documentary film, and I’m trying to develop my own feature… I’m moving towards producing documentary films and trying to work within documentary films.

LF: Comment on your reaction to sitting with an audience watching your sex life on screen.

FAYNGOLD: Each time I showed it, it became less horrifying. At the beginning, it was really terrible to show it. I just felt like everybody was sitting there thinking, "Oh my god! She didn’t have an orgasm the first time she had sex!" [laughs] I think [not showing myself on camera] makes it more comfortable for people to listen to the story. It was also important to me that it not be a sob story; that I don’t evoke pity; that I laugh at myself. Every time I screen it in a classroom, generally their response is, "Wow, you were so brutally honest, and you revealed so much about yourself." Sometimes I want to say, "That’s true, but there’s a lot I left out…" It’s important for people to realize that even though the piece is so personal and I am honest about that sort of lack of sexual satisfaction or whatever…at the same time, though, there’s a character in the video. It’s not REALLY me. I don’t know how to express that really well, but I think this is a point that is important in all kinds of personal work; that you become a character, and you have to treat the personal work you do in film as treating yourself as a character, and recognizing that it’s never going to be 100% you.