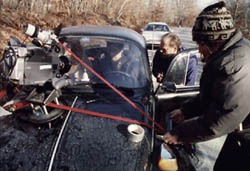 Got a scoop? Email news

The organizers of the first Williamstown Film Festival, scheduled for June of 1999 in MA, are considering showing a few 35mm shorts from western MA filmmakers. If you would like your film to be considered, submit a VHS copy, with the film’s distribution history, by April 16. They will get back to you by May 15. Please contact Elizabeth Lambert, at elambert@bcn.net or just send a VHS copy of your film to PO Box 207 Cheshire, MA 01225.

Where new film festivals are popping up all over New England, two fests in Rhode Island decided to merge instead. The Providence Covergence Film Festival and the Rhode Island International joined to form the Providence Rhode Island International Film Festival. "We are now in a strong position to expand our festival. From May through August, we are presenting events in cooperation with other film, tourism and community organizations under the P-RIIFF programming umbrella." The festival is scheduled for August 6-19, 1999 and features an annual screenwriter’s conference, film forum, expo and screenings. For more information, call or write P-RIIFF at: 55 Bradford Street, Suite 300, Providence, RI 02903; E-Mail: flicksart@aol.com; Web: www.eatinri.com/flickers.

The Nantucket Film Festival is scheduled for June 14-19, 1999. The festival, which has carved out a niche for itself as one of the few fests focusing on screenwriting, features screenplay readings, panel discussions, and intimate ‘morning coffee’ with screenwriters and filmmakers in addition to screenings of features and shorts. http://www.nantucketfilmfestival.org

The Women in Film and Video, New England Awards will take place on May 4 at 6:30 p.m. at the Fairmont Copley Plaza Hotel. Honorees are Julia Child, Robin Dawson, Marita Rivero, Nancy Porter, Katharine Ross, and Bo Smith. For more information and tickets, contact info@womeninfilmvideo.org or call 617-924-9494.

The Mass Media Alliance, a trade organization for media professionals, has changed its membership prices and structure. Membership info and application form is available on their web site at http://www.mass-media.org/about.htm

Local film/video company Reunion Productions was hired by Lycos, Inc. to create the video, "Beginner¹s Guide to the Internet." The video for Internet "newbies" starring John Turturro was made available for free rental on the community service shelf of over 4,000 Blockbuster Video stores, West Coast Video stores, public school libraries and classrooms across the United States in mid-March.

The production was funded by Lycos who has instituted a campaign to better educate the public about the World Wide Web. Their target audience is "Internet newbies," people who are new to the Internet and are unfamiliar with its operation, uses and capabilities. Several MA locations were used for the shoot including Binky¹s Restaurant in Middleboro, MA and Johnny¹s Oil in Plainville, MA. Producers also hired local actors, cast by Carolyn Pickman of CP Casting in Boston, to portray Tick Neck townspeople.

Sundance Theatres, a new independent film venue, will open opposite Fenway Park on Lansdowne Street. Representatives of The Sundance Group, John Rosenthal, the developer, and the architect discussed their plans at a community meeting held in mid-March at the Boston Arts Academy. Plans call for eleven screens, a library of work, a restaurant and bar, and performance space for the Arts Academy. The project is backed financially by General Cinemas, and will be run by Sundance, and hopes to provide resources and support the efforts of the established local independent community.

"Black and Chrome" is an underground b/w, 16mm motorcycle feature being shot in Jamaica Plain for the next three months. Directed by Jeff Hudson who has done numerous music videos including Pat Metheny and O-Positive. The film will be premiered in rock clubs in Boston next fall.

Memory Productions’ "The Shoemaker And The Fishpeddler," a stage play version to open at the Raw Space Theatre on 42nd Street, NY from July 22-August 8. Film version of the same title still seeking investors.

Ice Nine Multimedia is producing "Hugs From God." This heartfelt drama will be shot in New Milford, CT this summer. They have a multi-Emmy winning director, a well respected international sales agent and our completion bond. The budget is $2.6 million, with sales estimates of $5.5 million. We require an investment of $1.5 million. Interested investors should contact deborah.weinberg@snet.net or call D. Weinberg at 860-657-3895.

Watch Boston native, Glenn Phillips in his latest TV appearance co-starring on "NYPD Blue" airing April 20, 1999 at 10pm on ABC. For more info about Glen Phillips check out the his web site at www.jps.net/dkirk.