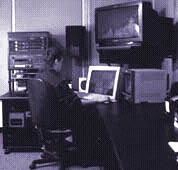 DVD: Coming Soon to a Living Room Near You

Share
You might not think you need DVD, or even want it. But here's what you'd be missing...

With a casual flick of the wrist, you slide the latest title from the rental store–practiced too many times recently, you think to yourself–into your Digital Video Disc (DVD) player. Plopping down into the natty overstuffed chair dug up from someone’s basement, you power up your flat-screen TV and stereo amplifier, powering your maxed-out surround-sound system, and hit play, instantly awash in a sea of sound that takes you from the confines of your beat apartment to Gotham, where you fight crime with the latest "Batman" flick. Not exactly pleased with this version’s musical score, you bring up the DVD menu–remotely of course–and while you are at it, maybe now is a good time to brush up on those long-forgotten Spanish language skills by switching to the Spanish language version. Just to make sure that none of the nuances of the film are lost as a result of your neglected Spanish skills, you also bring up the English subtitles. Of course, no movie is complete without a good trailer or two, and you select the West Coast trailer, which rocked more than the East Coast version, something about better blood-and-guts animation. Sinking deeper into your chair, you wonder how people ever put up with video players in the first place.

To some, the above may sound like science fiction, but to a growing segment of the movie-watching public and the creative folks who make them, DVD-video is fast becoming the medium of choice. DVD technology, standardized only within the last three years, is being marketed aggressively by both manufacturers of the hardware (DVD players) and the software retailers and movie sellers and rental chains. DVD as a class of formats is composed of DVD-audio; DVD-ROM, which can incorporate film and video in a computer program environment; DVD- video; and several other classes of DVD. This article will concern only the DVD-video format.

What DVD offers to film or video is twofold: first, the technical specifications and performance of DVD offer a viewing environment that rivals the movie-going experience, even surpassing most theaters in the quality and nature of the sound possible; and second, in terms of actually changing the way movies are structured.

A single DVD disc, the size of a compact disc, can hold up to four hours of video per side. Some DVD discs–flippers–can be played on both sides. So, for example, you could have a director’s cut and a producer’s cut on the same disc, or a trailer and a making-of-the-movie piece, and even interviews with cast and crew. Moreover, the DVD can produce picture quality up to 20% better than laser disc and twice that of the common VHS videotape.

At this point, all comparisons with other formats is about to end as DVD breaks new ground: interactivity. Inherent to DVD is a menu system that allows instantaneous switching of audio tracks, video tracks, and even subtitle tracks. For example, DVD is capable of playing multiple perspectives that can be switched while keeping the soundtracks locked, allowing viewers to choose which perspective they like best. DVD viewers can also switch between pan and scan, and 16:9 format. The DVD user is able to switch between 32 different subtitle tracks, and between eight channels of audio.

The DVD rivals or beats the theater experience for sound if connected to the proper surround system–and, assuming that the post-sound work was of a high caliber, it might be noted that this is a level usually beyond the means or needs of most independent productions. These eight tracks of audio give DVDs the ability to have several different language dubs or to utilize the latest in surround sound, an experience that must be felt to be appreciated. Of course, all these open channels of audio, menu interactivity, and subtitling provide a space for a radical departure from standard linear structure that most films and video use. Through DVD, a movie can be structured hypertextually or nonlinearly. Although interactive games have been using this structure for years, and web artists recently, it is only through DVD that full-motion video and high-quality video is available. Such hypertext pieces might be used as museum or information kiosks. Of course, many in the indie film community may be wondering where all this leaves them.

Though the cost of DVD mastering is still expensive, it can cost less than making prints to release a standard 35mm film. And while VHS is a hard market to distribute in without a theatrical release, DVD distributors are clamoring for new titles to release, making DVD self-distribution a possibility, doubly so when considering that by the millennium, upwards of 14 million homes will have DVD players. Additionally, most new computers are shipping with DVD players as standard equipment. If you are interested in DVD mastering, Boston’s own Video Transfer is one of the few places in the country that has the technology to author DVD-video.

To get more information on DVD, you can attend a free seminar hosted by Video Transfer (361 Newbury Street in Boston; 617-247-0100) on Tuesdays and Thursdays at 8:45 a.m. and 12:30 p.m. There are also many sites on the Web, including DVD Today at dvdtoday.com.For companies that offer DVD production locally, see our Industry Directory listings.